Chuck Taylor: A ‘natural born weirdo’ with a penchant for in-ring versatility

Viral videos have branded Chuck Taylor a comedy wrestler, making his July victory over Zack Sabre Jr. for the Pro Wrestling Guerilla championship after nearly a decade with the company something unexpected.

“Even up until recently, I don’t think anyone would have told you that they would see me as the champion there, but like it felt great,” Taylor said. “The crowd was super behind me, and I don’t know if the match was any good or not, but when I did win, the crowd reaction — it’s a small building and you can only fit like 500 people in there — but that reaction was like, ‘Oh wow. This is cool.’ So it was a great feeling.”

His journey to such a career-defining moment started the same as many others — as a fan of Hulk Hogan and Ultimate Warrior. 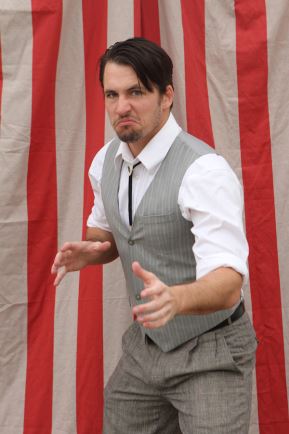 “All the characters and the costumes and the pageantry, and then the athleticism and stuff like that [drew me to wrestling], and then like everyone else, I kind of got out of it once you realize that girls are a thing,” Taylor quipped. “It’s such a cliche answer. And then I got back into it in the Attitude Era, in the late ’90s. And I can’t really watch something without wanting to do it.”

So as a high school sophomore, he discovered Old School Wrestling in Hardin, Ky., setting his plans in motion.

“My parents used to have to drive me to practice because I didn’t have my license,” Taylor said.

Since then — when he was a self-proclaimed “young, skinny kid” who did moves and “had no personality at all” — he has adapted his real-life personality into his matches trying to make his friends laugh.

“I think I’m a natural born weirdo — and I just started being more myself … Then I just started trying to entertain [my friends], and I think I got pigeon-holed as a comedy wrestler,” Taylor said.

It was YouTube clips, according to the Kentucky Gentleman, that spawned the perception.

“A few of those [videos] went half-ass viral — Can I say ass? — Like, some dumb comedy spots I did mostly in Chikara and a couple maybe in PWG,” Taylor said. “Those are the ones that go viral, and there’s that one like this slow-motion grenade thing that I did almost 12 years ago and when people think of me, they still think of that.

“I did that once 11 years ago. It’s not all of who I am. But when you type my name into YouTube, that’s the first thing that comes up.”

That being the case, Taylor said the “proliferation of viral videos” is what people remember about him.

“Maybe some things of me falling on ladders and on thumb tacks will go viral and then people will think I’m a crazy death-match wrestler,” Taylor said. “That’s my dream. I want people to think I’m Terry Funk.”

Though he enjoys the comedy bits, Taylor said, (despite thinking he’s “the worst”) that he is versatile in the ring.

“I think I can do so many different styles against so many different opponents,” Taylor said. “I do think that’s my biggest strength is my versatility. So now, I don’t know — people forgot I could do cool wrestling moves, and now I’m doing those and they’re like, ‘Oh, wait. I forgot. He’s actually kind of decent.’ Hopefully I can do more of that.”

‘EVOLVING’ TOWARD RING OF HONOR

Having been around the U.S. independent scene for more than a decade, Taylor became a staple in EVOLVE. Taylor scored a victory over Cheech on the debut EVOLVE show, was named a breakout star with the company in 2010 and, most recently, has played the role of “Dustin,” winning the EVOLVE tag team titles with Drew Galloway (now Drew McIntyre in NXT).

It was a “good platform,” he said, though he “missed the cool window in there doing all the WWE stuff.”

At this point in his career, Taylor said, he feels he has done “about all [he] could” in EVOLVE. But his time with the company led to his first opportunity to travel to Japan.

At present, he has set his sights on making the most out of his run with Ring of Honor. Taylor joined ROH in May and has been teaming with Trent Beretta as Best Friends.

“We have so much fun doing that,” Taylor said. “And there’s such a great tag team landscape right now out there. Not only in Ring of Honor, just all over the world. Like, strangely enough after winning a singles tournament [in Waterloo, Iowa, at the Tragos/Thesz Hall of Fame weekend], I think I’m a better tag team wrestler.”

LIFE AS A TRAINER IS ‘BIZARRELY REWARDING’

Taylor’s skills also landed him a trainer role with Chikara, which he has held for nearly six years.

“We just opened up our new school in north Philadelphia, and it’s really cool,” Taylor said. “We’ve got our own facility and bunch of different trainers. It’s great. Obviously, I’m biased, but I think it’s one of the better places to get trained because we do train seven days a week with five full-time different trainers … [and] all different styles.”

“I trained him back in like 2003, not because I was super qualified,” Taylor said. “I was the only guy who would go train with him because he was young, I was young. We would go travel together. So I’ve been doing it for a long time.”

Training others while still actively competing, according to Taylor, “sharpens your basics.”

“If you’re teaching someone over and over again, repetition, repetition, then you get really good at it,” Taylor said, “and so, it’s definitely helped my in-ring stuff, plus it’s bizarrely rewarding. I’m kind of a pessimistic guy, but to see someone’s first day they walk in and I’m their trainer for their first day and then now they’re doing shows and they’re getting booked other places, it’s really rewarding to see people grow like that.”

Sonny Defarge and Cornelius Crummels are two students who, in less than one year, have started earning bookings outside of Chikara.

“I was their trainer their first day,” Taylor said. “They came in and they put in the work, put in the time and now they were tag champions in Chikara. And they put on good matches, and I got to wrestle them and they do great. I’m very proud of them.”

A ‘LIFER’ IN THE CHANGING INDY LANDSCAPE

When Taylor broke into the business, he said, “all the guys on TV were giant monster people and all the little guys were on the indies.”

Taylor also has seen the wrestling landscape change in the merchandise realm.

“Wrestling is so crazy right now with all the different guys that have been getting opportunities. So many of my friends make money in wrestling now,” Taylor said. “And they’re little guys … And then you have stuff like the Young Bucks and Bullet Club, they’re selling their stuff at Hot Topic at malls … Even four years ago, if you had told me something like that, I’d never believe you.”

Regardless of the state of the indy scene, Taylor said his goal is to “always be able to make a living in wrestling.” And, at the moment, he said he’s able to between being a trainer for Chikara and wrestling countrywide, referencing Malcolm Gladwell’s theory that 10,000 hours of practice at a skill makes someone an expert.

But the Kentucky Gentleman doesn’t see WWE or NXT in his future.

“I tried out a couple years ago, and I guess it didn’t go well because I’m still here,” Taylor quipped. “I have a college degree in television production, I have 16 years of wrestling experience, I think there’s always going to be something for me in wrestling, whether it be training or behind the scenes or production or something like that, so I think I’m a lifer. I think I’m stuck here.”