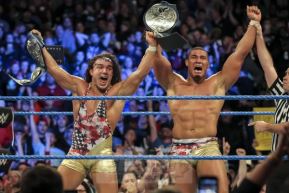 Chad Gable and Jason Jordan started their amateur careers with a passion for professional wrestling in their blood and — despite not teaming until their days in NXT — took similar paths to the squared circle.

They became like brothers, their bond growing stronger and their tag-team chemistry permeating arenas worldwide. They became NXT tag team champions, jumped to Smackdown! LIVE and secured the blue brand’s tag team titles. Then it all changed.

In July, Jordan was revealed as the long-lost, storyline son of WWE Hall of Famer and Raw General Manager Kurt Angle, subsequently splitting up American Alpha — a move Jordan said is “bittersweet.”

“I was very happy with our tag team,” Jordan said during the George Tragos/Lou Thesz Professional Wrestling Hall of Fame weekend in Waterloo, Iowa. “Chad and I are extremely close. We took being tag team partners to heart, so it’s going to be a big change and a big adjustment, but I’m happy for the new chapter in my life.”

Then again, it’s “kind of hard not to be excited to be on RAW,” Jordan said, and his singles goal is — simply put — championships.

“I think that kind of solidifies a lot of people’s legacy,” Jordan said. “I think that it would do a lot of honor to our tag team for me to have a successful singles career. So, first of all, just getting things going, it’s going to be a big adjustment, picking up some wins. But yeah, from there, I would love to keep the gold in the blood.”

Gable, who happened to be watching Raw in his hotel room, said he was taken by surprise seeing Jordan “walk down the aisle.”

“It’s like, ‘What?'” Gable recalled. “But it’s cool, to be honest. That’s about the best opportunity you can possibly ask for in this place, and I think he’s going to take full advantage of it.”

But the timing also worked out for Gable, who has had a handful of singles matches on Smackdown Live recently.

“I had a great [match] with AJ [Styles] that I was so happy with, and it really kind of reminded me of why I got started,” Gable said. “When I got started, I always saw myself as a singles wrestler, and then I fell in love with tag team wrestling, and thought that’s all I would ever do. But you never really know anything in this business.”

So the recent split is “exciting” for Gable.

“I think for both of us, it’s a new opportunity to show kind of the whole WWE Universe what we can do in a new way on our own,” Gable said. “I think they’re going to really like it.”

Gable has been a fan of pro wrestling his whole life, he said, with a goal from his pre-teens years of making it to WWE — “Long before I ever tried to go to the Olympics.”

“I graduated high school and kind of had to make a choice, what do I wanna do?” Gable said. “I’d done really well at amateur wrestling. I also wanted to do this pro wrestling thing, but I chose to chase the Olympic dream.” 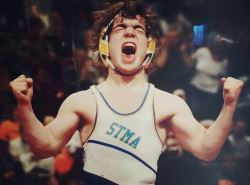 A young Chad Gable when he was Charles Betts.

But in chasing that dream, ultimately competing in the 2012 Olympics, it opened the doors to the pro ranks.

“In a sense, one kind of complemented the other in this amazing way and really kind of let me live both of my dreams, which is pretty awesome,” Gable said.

Jordan said there was “a little bit of a plan” to ultimately transition to professional wrestling when he started at the amateur level, but it “becomes blurred.”

“When I originally started amateur wrestling when I was seven years old, I thought I was going into professional wrestling,” Jordan said. “So it was like this big surprise of going to practice, and it’s like, ‘Those aren’t suplexes!’ Vertical suplexes, and all that, but I started loving amateur wrestling.”

And it was through his amateur career that WWE Talent Scout Gerry Brisco discovered Jordan.

“I owe everything to him,” Jordan said. “It’s kind of ironic. It came full circle. I started amateur wrestling because of professional wrestling and that’s what got me here.”

Gable said he came into NXT “at a really unique time in NXT’s existence.” Signed in 2013, Gable joined the ranks alongside the unveiling of the Performance Center in Orlando, Fla., growing with the brand as it became its own entity.

“I was very lucky to be a part of [NXT] at a time when it just exploded,” Gable said. “Me and Jay got going in that time when we had rockstars in Finn Balor [who] was there at the top, Samoa Joe, guys that were just killing it and really carrying the brand and letting us come along for the ride and contribute in our own way. But what a ride it was.”

Before that ride, both Jordan and Gable had to shed a key part of their lives as amateur wrestlers — a lack of emotion.

Jordan said it was a “complete flip” in that regard once he stepped into the squared circle. But the “adjustment period” was aided through the coaches and programming at NXT, according to Jordan, who still feels as though he’s transitioning. Interviews were the hurdle he felt was the hardest to overcome. 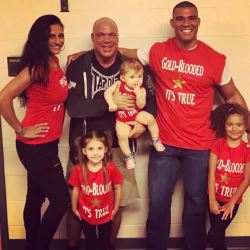 Angle’s newly revealed son gave the majority of the credit for breaking out of that shell to the late WWE Hall of Famer Dusty Rhodes.

“I had a close relationship with him when I was in NXT,” Jordan said, “and he was phenomenal at finding something within you that you didn’t even really think was there … and then pulling that out of you.

“He did that for me. He pulled so much emotion and personality and everything out of me.”

Similar to Jordan, Gable said interviews and promo work early on left him “wracked with anxiety” — even in promo classes at NXT.

“There might only be 15 people there, but that’s as hard as anything,” Gable said. “You know their eyes are on [you], and they’re judging you. So the whole entertainment aspect of it is something that you really had to get used to, get comfortable with, because in amateur wrestling, obviously you would never be that emotional out on the mat or you get yourself in trouble.”

THE CREATION OF AMERICAN ALPHA

In the storyline version of Gable and Jordan becoming a team, Gable begged and pleaded with Jordan for weeks to tag together. Though both said their in-ring chemistry developed almost immediately, the build to their partnership was somewhat true to life.

“[Jason] had been in developmental a long time before me — a couple years — and he was struggling,” Gable said. “A lot of that was very true to life.”

“I was so stubborn and feeling like I wanted to have a hand in control of things,” Jordan said.

Jordan, according to Gable, “went through singles stuff that wasn’t working.”

“He went through multiple partners [and] that wasn’t working out,” Gable said. “Something about it wasn’t clicking. And they had tried us out at some live events and things like that locally, and they saw that it worked.”

Jordan said his early WWE career had “a lot of ups and downs,” including a knee injury before even debuting on NXT television.

“[I was] coming from amateur wrestling where I absolutely I hate losing more than I love winning,” Jordan said. “So to come here and kind of fail so often, it was a bitter taste and it was hard to adjust, but it was an amazing thing because it made me appreciate when Chad came in and we had such an amazing chemistry.” 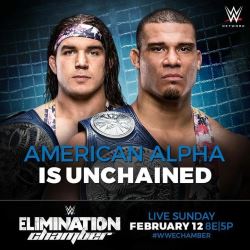 That was when Gable got to “play the pesky little brother character” until Jordan caved and agreed to become a team.

“A lot of it was true to life, too, as far as it being the perfect pair,” Gable said, “because once we got together and really started trusting each other … we gelled from the first moment.”

That connection wasn’t only as a tag team, but as traveling partners on the road.

“When you’re away from your family and driving these long trips and staying in hotels and all this stuff, to have somebody that you just click with like that, it makes it so much easier,” Gable said. “And we share a hotel room. I don’t think anybody else on the roster shares a hotel room. We’re able to do that and [have] no problems. We’ve never got in an argument.”

It was Rhodes who brought American Alpha together, and Jordan doesn’t shy away from the effects the tandem has had on his career.

“I think that I owe a lot to Chad to where I am now because it was an amazing road,” Jordan said. “But it’s a little awkward now because I feel like everything good that’s happened in my career so far has been at Chad’s side. We’ve been right next to each other the whole journey for anything good happening, so it’s going to be a little different, a change, but that’s kind of how I felt going through NXT.”

One tangible goal the duo was not able to obtain in their first run together, according to Jordan, was being spotlighted at WrestleMania.

“We thought that that would have been the ultimate goal,” Jordan said. “We had won the tag team championship already. So, at that point, we definitely wanted to try and get that … [and] make history. Hopefully, further on down the road things will come back together, and we’ll still have that opportunity.” 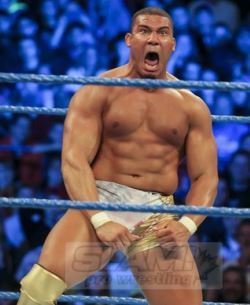 Even still, besting Randy Orton and Luke Harper to win the Smackdown tag team championship, Gable said he wished the team could have showcased more of its personality before the split.

“Maybe be able to have just been ourselves on camera in a setting not in the ring, whether it’s backstage or even outside the building, anything, and just show the audience who we are and why they should care about us,” Gable said. “Because other than just being good wrestlers, we didn’t really give them a great reason to care about us.”

But Gable was quick to say that despite not taking that opportunity or having an outlet to show their personalities, “everything worked out great.”

“We might end up back together eventually and get to do it again,” Gable said.

Until then, Gable will pave his own path on Smackdown, while Jordan does his best to keep gold in the blood on the red brand.