How Fabian Ribeiro danced away from his heritage — and Jinder Mahal 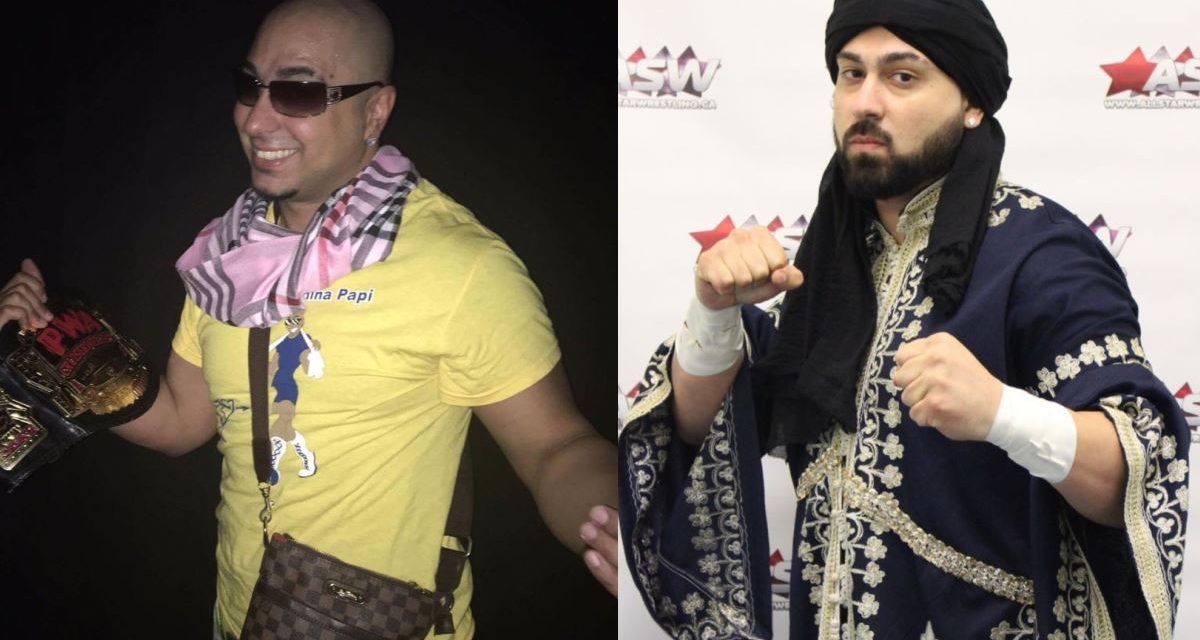 It wasn’t transformation Tuesday when the traditional second-generation wrestler Gama Singh Jr. turned into the stylish dancing maniac Fabian Ribeiro, however the transition has been worthy enough to make him want to live the gimmick. 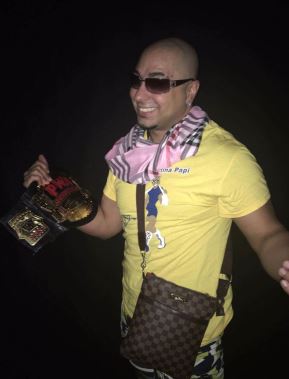 Fabian Ribeiro is ready to dance!

It was four years ago when Gama Singh Jr. (Munraj Sahota), who primarily wrestles in the Prairie Wrestling Alliance in Alberta, re-invented himself into the “Stamina Papi” Fabian Ribeiro. Sahota had been wrestling under the “Gama Singh” moniker from when he started in the business. His father, Gadowar Singh Sahota, was the leader of the infamous Karachi Vice in Stampede Wrestling, and was known as Gama Singh and The Great Gama.

Gama Singh Sr. was one of the most despised wrestlers to wrestle in the Prairies. When his little boy started in the business, he needed a name. Sahota said his trainer, Bad News Allen Coage, didn’t give him an option.

“Bad News Allen always referred to me as Junior… I had no choice because that’s what they all called me,” Sahota joked.

Eventually it became time for a change. In 2010, Gama Singh Jr., along with his cousin, Tiger Raj Singh, went to the WWE for a tryout. Sahota and his cousin wrestled as a tag team on the indy scene known as Sikh and Destroy, and also as the New Karachi Vice. Sahota always hoped that the duo would make it to the WWE together. During their indy events, Sikh and Destroy would come out to upbeat Punjabi music, often getting the fans on their feet and dancing along. Their attire consisted of traditional Indian clothing, such as turbans, and loose collarless shirts known as kurthas. Even their trunks would have the word Singh, meaning lion, written on it in Punjabi dialect. At the time of the tryout, Sahota injured his knee, and Singh got a contract, and is now known as WWE superstar Jinder Mahal on the Smackdown brand.

Despite not making the big leagues, Sahota walked away with experience and key pieces of feedback that would go on to be beneficial for his career.

From his tryout, he got the sense that WWE was looking for more entertainment. That was his biggest motivation to change. 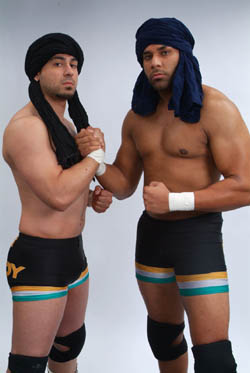 “I sat at the drawing board for a couple months, sat at home away from wrestling, away from some people, and came up with something,” Sahota told SLAM! Wrestling. “I knew [the Spanish character] would be my base.”

After many years of being known to fans and promoters as Gama Singh Jr., Sahota finally decided on a direction to go. He had represented his dad’s Indian culture for a long time, so it was time to show his maternal side some love too. His mom is of Puerto Rican decent, and Sahota knew that was the starting point of his new gimmick.

Besides wrestling, hockey was also a big part of the Calgary native’s life. At one point in his career, Sahota turned down a scholarship opportunity with a U.S. college to pursue his dream of pro wrestling. It’s a decision he stands by. “I have no regrets,” he said. The physical nature of hockey was a plus in his wrestling training, but another activity he did as a kid would become a vital part of his wrestling career.

As a kid, Sahota often danced at family functions. It’s where he learned how to do the salsa, a dance which he incorporates into his act everyday. “It’s in the family culture,” Sahota said.

However, when he thought of the new persona, not everybody was on board. He remembers his dad hated the idea. He wanted him to be more of a serious character, someone who the people could get behind, Junior saw it a different way. He told his dad, “If the WWE didn’t like it, and didn’t sign me, I need to change something,” Junior expressed to his father. It wasn’t easy for him to get his dad sold on the gimmick, and it took a lot of lobbying to get it done.

“Look,” Sahota told his dad, “I’m going to wear flamboyant shirts, I’m going to wear sunglasses, I’m going to speak with a Spanish accent.” He assured him he wasn’t making any sort of mockery towards the business or the culture. Once his dad watched Junior transform himself into the “Stamina Papi” he was sold. 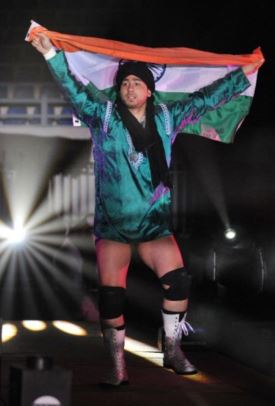 Back in his days as Gama Singh Jr.

“I was hesitant,” Gama Singh admitted in an email, “but when I saw his dedication, hard work, and time he has devoted to the persona … I knew it was for real and there must’ve been something that he could see that I couldn’t.”

On the other hand, his mom, Silvia, who is also a huge wrestling fan, was ecstatic to see the debut of her son’s new wrestling gimmick. She went out of her way to make sure she attended that show, which made Sahota uneasy.

“It was even more nerve-wracking… my mom is going to be there, I felt like I had to work extra hard because I didn’t want to let her down,” he said.

His mom is so proud of the fact that their entire family in Canada, U.S., and Puerto Rico are loving the character, but for her it’s not all about paying tribute to the Puerto Rican roots. “[I am] more proud that he is having fun doing what he loves,” Silvia said, “At the same time he is showing he can entertain people with a serious yet silly side.”

One of the ways he entertains is by doing the cha-cha on his way down to the ring. The first time he did it, he surprised many of his peers and fans. He remembered back when the crowd collectively chanted “Gama! Gama!” His response? “I have no idea what you’re talking about.” And he said it in his Spanish accent. 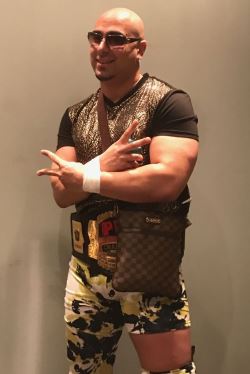 By no means has Munraj forgotten about the Gama Singh Jr. character, but he is completely invested into the “Stamina Papi,” and his social media handles prove just that — Instagram, Snapchat, Twitter? All Stamina Papi. He believes in always living the gimmick.

“I remember Ric Flair saying a long time ago, you gotta live the gimmick, and when I’m Fabian, I’m 100% invested, and there’s no turning back on that,” he said.

Oddly enough, the “living the gimmick” attitude was what helped Sahota come up with the Fabian Ribeiro name. Since he’s always in character he thought he’d try adding the word “kayfabe” in his name. As one of his friends in the business, Azeem the Dream can attest, Sahota is always one to rib his peers. Thus, Sahota wanted to call himself the “Kay-fabian Ribber.” From there, Fabian Ribeiro was born.

Now Munraj Sahota would like another crack at making the big leagues, and insists he’s in the best shape of his career. He’s constantly coming up with ways to improve, whether it be in the ring or on the mic. “Even when I’m driving I’m thinking of what I could do,” said Sahota. “Not one shower goes by in a day where I don’t think about something wrestling related.”

Azeem the Dream is confident we’ll see him in the WWE one day. “A true professional,” said Azeem, “he doesn’t use his dad’s fame in wrestling to get where he is, he uses his own talent.”

“Until the day they flat out tell me they won’t sign me, I’ll keep trying.” said Sahota, “I would never put it on my cousin or my dad to make that phone call, I’d definitely make it myself.”

In the meantime, sharp-eyed fans might be able to see him in the audience at Backlash at Chicago’s Allstate Arena when his cousin and old tag team partner, Jinder Mahal, faces Randy Orton for the WWE title.