Who will exact revenge? Who will survive the House of Horrors? Who lost his tooth? Above all else, who will keep their title? It’s a busy night in the WWE, so read on and catch up on everything from the first show after Wrestlemania.

First up: the main event. The questions raised were all about Roman Reigns’ lingering injuries and whether he could make a stand against Braun Strowman. As Reigns enters to his customary Bronx Cheer, Cole lists his injuries including “possible internal injuries”. Boy, hopefully they’ll have figured out if he’s internally injured by now.

Reigns is taped up, and starts off quickly with strikes, but soon Strowman grabs him and starts tossing him about like salad. Into the barricade, into the announcer’s table, into the turnbuckles — it looks pretty hopeless for Reigns.

As is often the case, though, one move can often turn the tide. In this case, that move is a Spear by Reigns, but here Strowman spoils it by kicking out. The ending comes together in what seems to be the expected fashion: Reigns has survived the brunt of Strowman’s assault, connects with a Superman’s Punch to bring Strowman to his knees, and is ready to deliver another spear. The unexpected part? When Strowman grabs him in mid-run, chokes him in a triangle hold momentarily, then delivers a running powerslam for the clean win.

It takes the crowd a half-second to recognize the finality of what they witness, and they both cheered and booed heartily — which is, as the announcers often remind us, all you can really ask of a crowd.

The next WWE pay-per-view is Smackdown’s Backlash on May 21st.

Michael Cole, Corey Graves, and Booker T bring us the commentary from San Jose, CA. In the pre-show, Enzo and Big Cass defeated Gallows and Anderson, but my question is whether Enzo’s pants that spell “Bona fide” like “Bonifide” is a calculated misspelling? Off I go to Urban Dictionary to see if I’m missing something.

Like a sequel that picks up right where the original left off (I’ll choose The Karate Kid Part II for an example), this Wrestlemania rematch wastes zero time in pre-match histrionics. Graves makes a point of referencing how well these two know each other’s moves, and a series of counters and dodges ends up with Owens driving Jericho face-first into the corner post. He follows that with a deep chinlock and an extended scratching of Jericho’s face using his stubble. 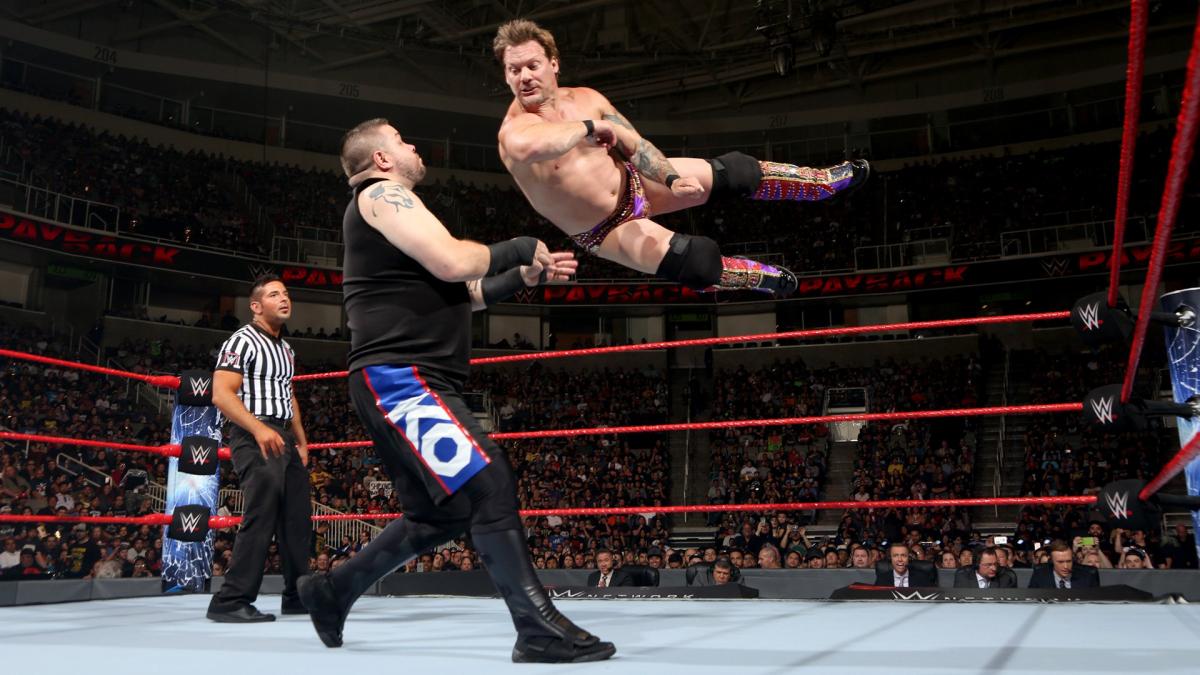 Owens about to drink in the elbow of Jericho. Photo: WWE

Cole takes a side and wants to see Jericho get his revenge, but doesn’t necessarily want to lose him to Smackdown, as, if you recall, the winner of this match carries the title on the Tuesday night show. Jericho mounts a comeback but it dies like his Lionsault onto Owens’ knees. Moments later, Jericho rides through a Pop-Up Powerbomb, rolling into the Walls of Jericho. Owens, though, gets one finger on the ropes for a break, just like at Mania.

Angered, Jericho assaults Owens’ finger, stomping on it, crushing it behind the steel steps with a kick, and after he locks the champ into a second round of Walls, Owens has no escape and taps out.

Match #2 – Austin Aries vs. Neville (champion) for the Cruiserweight Championship

Aries is putting on a show in the early going, with acrobatic arm-drags, a headstand to escape a leglock, and is looking for an early 450 Splash before the champ knocks him splay-legged onto the top turnbuckle. Neville’s venture to the top rope is more successful with a missile dropkick. Uncharacteristically, Neville takes his eyes off Aries to gloat to the crowd, and Aries dropkicks him to the floor.

Moments later, a solid elbow strike off the top rope to the spine of a seated Neville gets a near fall for Aries. His follow-up had all the markings of a win, as Aries locked in Last Chancery on Neville. Nowhere near the ropes, Neville instead grabs the referee and pulls him to the mat, earning himself a disqualification. Even with a tainted finish, this was your show-stealer.

The gentlemanly approach is still in place from the singles matches these four men have had recently, with clean breaks and competitive wrestling. Will it last? Well, here’s the test: a few minutes in, Sheamus delivers a strong kick to Jeff’s face, actually knocking a tooth out and onto the mat (which the ref dutifully picks up and puts in his pocket to return to Jeff later, or sell on eBay). Jeff fights through, tags in Matt, and takes Sheamus out on the outside floor.

Leaving Matt with Cesaro, Hardy misses a moonsault and Cesaro follows with a springboard corkscrew uppercut. He then welcomes Matt to the new WWE with a lengthy Cesaro Swing and Sharpshooter, but Matt makes the ropes. That makes for a temporary reprieve, though, as Sheamus comes in and delivers a big White Noise from the second rope, but Jeff breaks up a pin attempt.

The end comes soon after: Matt dodges a Brogue Kick, Sheamus wiggles out of a Twist of Fate, then after Sheamus powerslams Matt, who had made a blind tag to Jeff, a Swanton Bomb lands the Hardy Boyz the victory to retain the titles.

Winners via pinfall: The Hardy Boyz

It looks like the sportsmanship will continue with handshakes after the match, with Jeff even motioning to Sheamus to not worry about the lost tooth. Moments after the leaving the ring, though, Cesaro and Sheamus return to blindside the champs, beating Matt and Jeff in and out of the ring for a lengthy spell.

As Bliss and Bayley trade early offence, Cole and Graves go for hockey analogies, referencing the Shark Tank and saying that Bliss wants to play the part of the Pittsburgh Penguins and spoil the party in San Jose. Bliss starts getting cheap, yanking on Bayley’s hair a few times, but it seems to just rile Bayley up and she bursts back in control. Bliss escapes a Bayley-to-Belly, though, on both the mat and then one set up on the second rope, countering instead with a sunset flip into a powerbomb for a two-count. 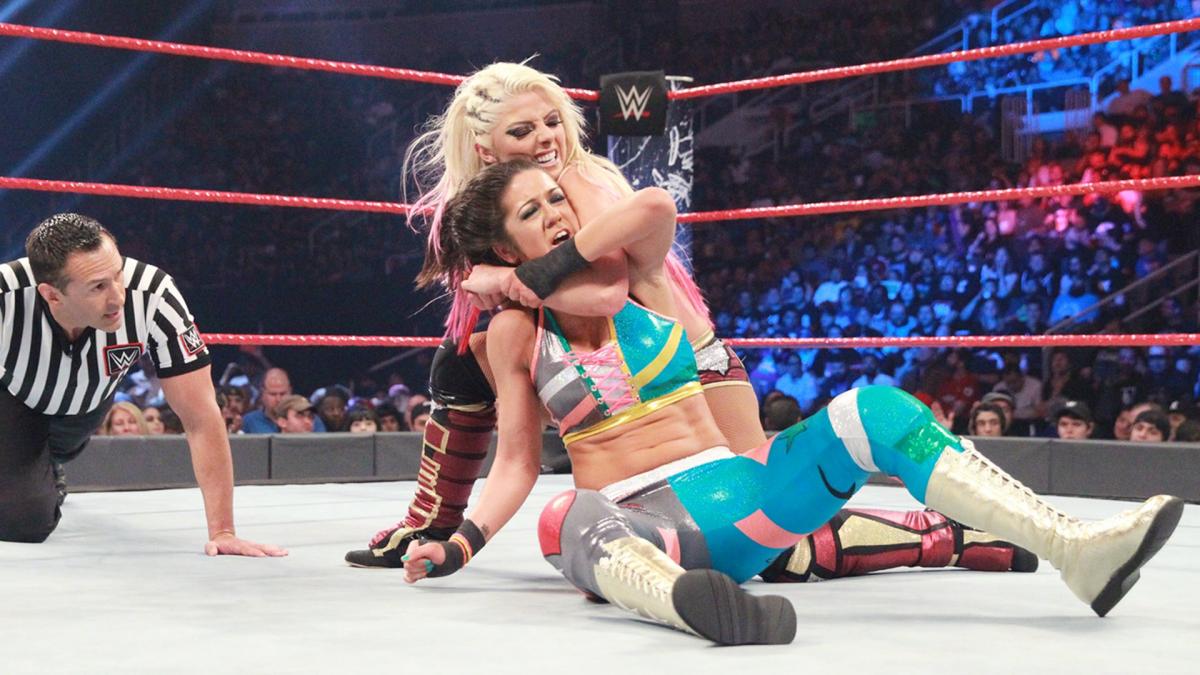 Bayley seems to wonder where it all went wrong. Photo: WWE

Bayley delivers a really solid running knee to Bliss’ head, then delivers the big elbow off the top. With the crowd so very much behind her, Bayley counters a sunset flip and holds Bliss down for a pin, but Bliss kicks her off and runs her head and shoulder into the steel post. Moments later, Bliss delivers a DDT and disheartens the hometown crowd with a win.

As weird as this match is likely to get, seeing Randy Orton arrive in the off-site location for this match in a limo, wearing pants but no shirt, is a really odd beginning. He gets out of the car, sees a light flickering in the upstairs window of a rundown house, watches a tractor with no driver roll past, and goes inside. A reminder: the match starts in this house, but must conclude in the ring.

This house is not in great shape, with cobwebs and flickering lights throughout. Wyatt sneaks up from behind Orton and a living room brawl ensues. Orton fights Wyatt off, and has to go find him somewhere in the creepy house. He sees a room with baby dolls of several deformed variations hanging from a ceiling and, like every main character in every horror movie, figures that’s a good place to start.

Again, Wyatt retreats after another scrap, and Orton’s search leads him this time to a kitchen, where, after a little beating from both sides, Orton and Wyatt lay on the floor, breathing heavily, looking like YouTube wrestling champs … until Wyatt topples a fridge on top of Orton (Please, DO NOT try this at home). Wyatt makes his way outside, gets into the limousine, and leaves for the arena.

To be continued later in the show!

Rollins goes for high risk early, with multiple suicide dives on Joe, but all Joe needs is one shot at Rollins’ knee and he puts Seth on the defensive. Joe strikes at the knee with punches, kicks, a senton on a prone Rollins, but still, Rollins gets back with strikes and a neckbreaker, but always favouring the knee. Rollins tries a cross-body off the top, but is caught and wrapped up in a knee-bar, which he escapes by crawling to the ropes.

Just after that, though, Rollins has to escape a Half Boston Crab in the same manner, and it really feels like he’s just surviving at this point. As Rollins drops Joe with his Falcon Arrow and follows with a Frog Splash, though, the match is back to even. As Joe locks in a sleeper hold, Rollins hooks and flips Joe over for a sneaky win.

Out in the parking garage, Wyatt arrives in the limo for what should be an easy win by forfeit, with Orton presumably still stuck under a refrigerator. Wyatt gets what is essentially an entrance, and when the lights come on, Orton is standing behind him. But how??? A more traditional No-Holds Barred match continues, and after Orton fights off the Singh Brothers, he hits Wyatt with an RKO, but Jinder Mahal attacks Orton from behind with the championship belt. Wyatt brings out Sister Abigail, and that’s that. 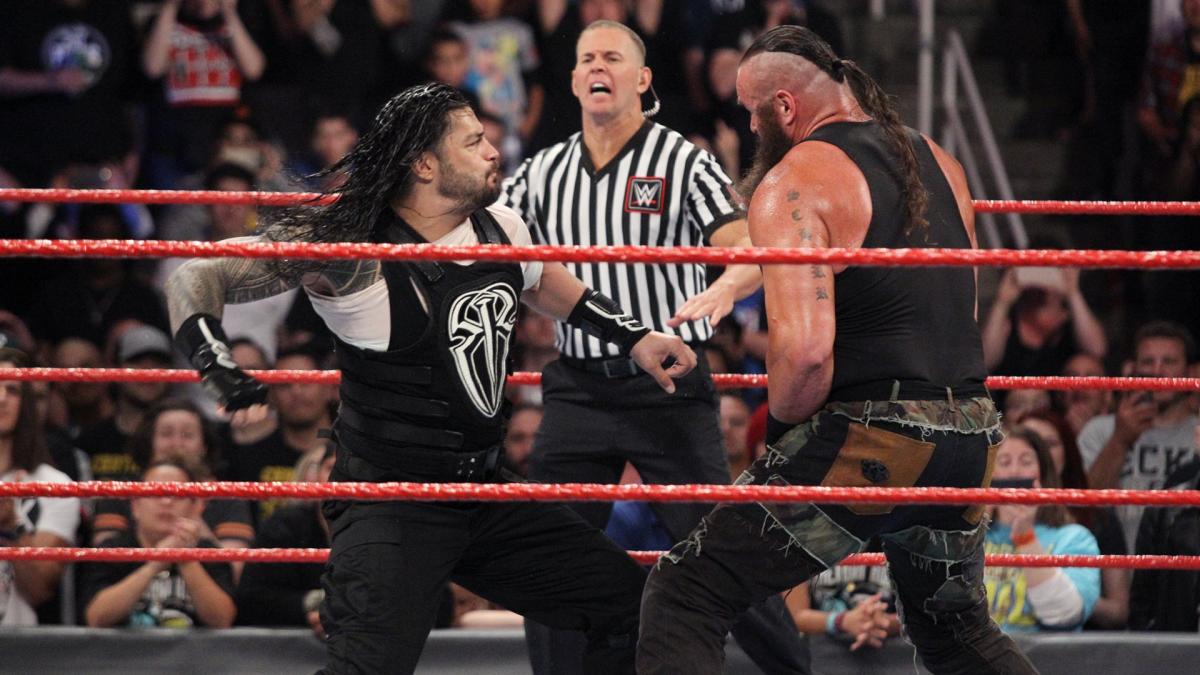 Reigns and Strowman duke it out. Photo: WWE

Not surprisingly, there are extra-curricular activities, with Strowman assaulting Reigns with and also onto the steel steps, and they meet again backstage, where Reigns actually gets in some parting blows by swinging an ambulance door repeatedly into Strowman. These two are not yet done.

A pretty standard offering, with title changes adding a little extra weight to the event.