Collecting is an interesting hobby. It can turn into an obsession and fill your house with plates that feature pictures of wolves or even cat t-shirts. I started my collection many years ago and was very specific about what I wanted to collect — wrestling. 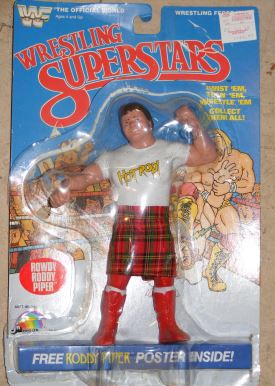 It was this Piper that started it all.

I could have gone the route of some collectors and tried to get every figure, every variant and corner the wrestling market. Not me. My collecting started in 1985 and really, it is a very modest collection.

It was the height of the Hulk Hogan and Roddy Piper feud. I knew I wanted something that represented the man who drew me into wrestling fandom. I vividly remember it being March 23, 1985, and I just happened to be flipping through the TV channels after swim practice. I was in Grade 5 and really didn’t have much in my life that excited me. In fact, I categorized myself as boring and pretty lonely. I stopped on Channel 29 out of Buffalo. Quite often that channel showed old kung fu movies and they always filled the entertainment gap. Instead of badly dubbed Japanese kick fighting flicks, there on the screen was a man who was agitated about something. I had to keep watching.

Piper sat on a stadium chair beside Gene Okerlund and started talking about Mr. T. He gave some very compelling reasons why Mr. T was a terrible role model for children. I started nodding my head. Mr. T shouldn’t be sticking his nose into Piper’s business because that is rude. I continued to nod. From there Piper became enraged and told me and the millions watching how he and his buddies would end T’s acting career when they were through with him. I accepted the Kool-Aid and drank deeply.

He talked me into wrestling. He provided me with logical reasons for his dislike of his foe. I wanted to see the end result. Piper did something that many heels and scriptwriters forget today, that the bad guy has to be able to justify his actions, no matter how despicable, because in his heart he truly believes he is just.

I had saved up some money from my paper route. My mother had informed me that we would be going to Niagara Falls, New York, to do some shopping. Quietly, I went to the bank and exchanged some Canadian money for its American counterpart. I asked my mother if we could go to Hill’s Department Store because I had learned that Roddy had a doll for sale. I had looked in the shops near my St. Catharines, Ontario, house and couldn’t find it, but I knew it would be in the U.S. Soon enough we arrived at Hill’s and I made a bee line to the toy department. This was not unusual for me as I often marveled at the GI Joe and He-Man figures, but today I had money. I found a section chock full of LJN wrestling dolls. 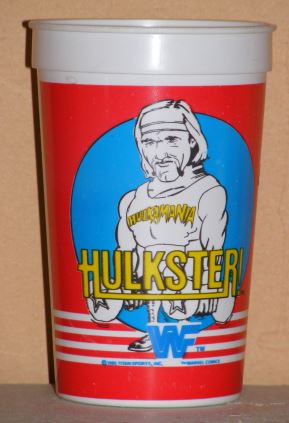 In the middle of the rubberized wrestling display was Roddy Piper. I looked at the price, $3.97, I had more than enough. I picked out the best-looking Piper doll and soon found my mother. I remember her looking at me in disgust when I told her I wanted to buy the doll. She told me that wrestling was immoral and that God wouldn’t like me watching it. In a rare moment of defiance I told my mother that I thought wrestling was fantastic and that Roddy was always moral in the ring even though he broke the rules. Remember, Piper was always justified in his actions and so I was justified in my support of the WWE’s top bad guy. My mother said that she wouldn’t pay for it and to her surprise I told her she didn’t need to as I had the cash to cover it.

My mother was defeated. I bought the doll and even stopped at the Hill’s concession stand where they were selling WWE cups filled with soda pop. All they had were Hulk Hogan’s likeness on the vessel so I purchased it with great satisfaction. In fact my mother so despised wrestling that I figured it must be awesome and fought tooth and nail to watch it as much as I could. It became a passion play for me to watch wrestling. I was the babyface struggling to view the plethora of wrestling options while my mother threw as many hurdles in my way to stop me. In the end the babyface always wins and so did I. My viewing habits included AWA, NWA, WWE, International Wrestling from Montreal, and the laughable broadcasts of Vancouver’s All Star Wrestling. I became a wrestling zealot. 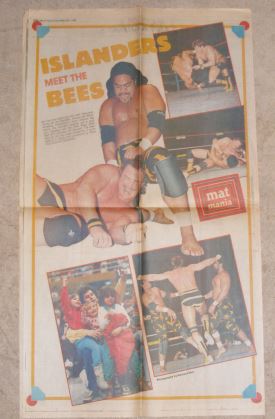 Now, my collecting did not become a full-out obsession because my mother became very controlling of my finances from my paper route. Soon it was decided that the church needed 10% of my earning as a tithe. I saw it as stealing. Soon, that is what I did, I stole from myself. I amassed a collection of wrestling magazines that I did not flaunt in front of my mother for fear that they might be taken away. I started buying a few packs of WWE wrestling cards, but my favourite items were the wrestling posters that the Toronto Star ran in 1988.

For many weeks the Star ran full-page, coloured posters of the WWE’s superstars in action. The Sunday edition carried these goodies and I started asking my parents for money to buy the Sunday Star so I could read their excellent sports section. How could any good parents deny their son the opportunity to read a newspaper? Sure enough my parents coughed up the money and my dad was really happy to read the sports section, only after I chopped out the poster. I still have some of them to this day. They were my secret. My private joy featured the Killer Bees against the Islanders and Greg Valentine taking on Brutus Beefcake. I loved those posters. By this time my father had joined my team and my brother and I were enjoying wrestling whenever we wanted. He also started to bring home wrestling articles that he saw in the newspapers he read at work.

Over the years I have acquired a good little collection of wrestling goodies. I don’t buy everything; just the things I wanted as a kid or things that I think are unique. That Roddy Piper made me a believer and I feel justified in my love of wrestling.