NXT book as much about HHH as the hot brand

The one thing about being a long-time wrestling fan and reporter is that you are a first-hand witness to all sorts of remarkable evolutions. Take Triple H, for example. When Paul Levesque left WCW and joined the WWE, he was a young DX punk full of piss and vinegar. It came through in his numerous interviews with us at SLAM! Wrestling. It came through in the portrayal of his Triple H persona inside and outside of the ring.

Then, years later, Levesque began to change. He began to mature not only as a person but as a performer. More and more, his chatter became increasingly more serious, reflective. It focused more on the industry, the business as a whole.

Today as Executive Vice President of Talent, Live Events and Creative, Levesque has done more to revolutionize the WWE than anyone since Vince McMahon took over from his father in 1982. Although he is the public face, guiding force and the architect of NXT, it is his visionary approach to the business that is celebrated in the new book NXT: The Future Is Now by Jon Robinson, hitting shelves shortly. 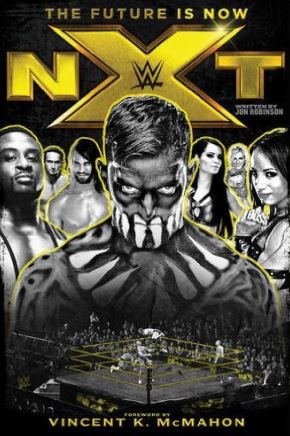 While NXT commemorates the accomplishments of the brand and its talent, the book is more of a testament to Levesque’s forward-thinking initiatives which began when he transitioned from the squared circle to WWE headquarters.

“The one thing that I thought was strange is that nobody was talking about where the future WWE superstars would come from,” said Levesque about his introduction to WWE corporate.

The thing is Levesque was not just talking about the in-ring talent at the time. He was also addressing everyone from the camera technicians, to the editors, to the commentators, to the people who set up the ring. Sooner or later, those people would leave the company or eventually retire. In Levesque’s mind the WWE needed to create a developmental system for every asset of the WWE’s massive production machine. So began the inspired creation of the WWE Performance Center and NXT.

As a wrestler himself, Levesque brought a different perspective to his corporate role which is why he transformed WWE’s ailing Florida Championship Wrestling into the NXT brand. Levesque admits that head office wasn’t even aware of what tremendous talent was on display in FCW (Baron Corbin, Seth Rollins, Cesaro, Tyler Breeze and others) and that the NXT brand was tied to a legacy of a failed pro wrestling/reality show hybrid. He vowed to change all of that and to his credit, he did.

A very large part, perhaps a disproportionate amount of the book, is devoted to the history of the WWE Performance Center. From Levesque being inspired by the New York Giants’ training facility, to him convincing McMahon to invest in his idea, to finally breaking ground on the facility, the Performance Center is really the core of NXT: The Future Is Now. We learn how there are different rings for different levels of performers, how each ring or level has its own coach. How the wrestlers are also trained in all facets of production from classes on cutting promos to developing their characters and ring presence. How trainee announcers can call up any WWE match to practice their skills on. On all accounts, the Performance Center is the elite wrestling school in every regard imaginable.While it is quite fascinating what the Performance Centre offers and how it came to be, what fans want to read is the history of NXT of which there is some of that in NXT: The Future Is Now. Robinson has access to and speaks to every superstar imaginable so there are many comments and some interesting behind-the-scenes stories.

Probably the best of those are Windham Rotunda’s and Thomas Pestock’s accounts of how the Bray Wyatt and Baron Corbin characters came to be. As Tom Prichard and Dusty Rhodes knew Rotunda was not being his true self as Husky Harris, they encouraged him to take his own rebellious, real-life personality and turn it into Bray Wyatt. Rotunda went as far as getting new tattoos and covering up his old ones to put his past as Harris behind him. Even though others didn’t want the Wyatts to use the lamb masks, it was Rhodes who pushed them to don them during a promo and the rest is history. When it came to Corbin, no persona stuck until he was told to be himself, which is the loner turned up to ten that we saw on NXT and now on Smackdown. While these stories really give fans insight into many of the NXT alumni, I just wish there were far more of them.

Levesque is happy to share his success with others too, those whose work behind the scenes and aren’t recognized as much as it should be. Tom Prichard, Michael Hayes, William Regal, Terry Taylor, Matt Bloom and especially the late, great Dusty Rhodes, who gets his very own chapter, are all praised for inspiring so many careers and shaping the WWE superstars of today.Like any WWE narrative though there is a bit of revisionist history and disputable comments, here and there. For instance, Levesque is quoted as saying to Vince McMahon, “We survived every other place closing its doors because you have created a brand that’s so successful that is all anyone will pay to see.” Of course, there are all sorts of wrestling promotions that fans support with their hard-earned dollars all around the world including New Japan, Ring of Honor, TNA, etc.

Also, even though NXT has been the home to many international superstars who were true impact players before they even signed a WWE contract, talent such as Finn Balor (Prince Devitt), Samoa Joe, Bobby Roode, Eric Young, Shinsuke Nakamura, Kevin Owens (Kevin Steen) and others are often referred to as “relative unknowns,” which is of course, is just simply not true at all.Even with the occasional open mouth insert foot moments and so much of the book devoted to the Performance Center itself, NXT: The Future Is Now does a respectable job of recounting the growth of the NXT brand and its superstars. What is even more significant though is the importance of NXT and Levesque to how the WWE is currently changing its business. How the WWE isn’t above mentioning the competition nowadays. How the past achievements of some superstars, like A.J. Styles and Finn Balor, are now discussed publicly and openly on WWE broadcasts. How anyone at any time at WWE corporate can monitor the real-time progress of any of their superstars in training. All in all, it is a progressive strategy which can be traced back to the formation of the WWE’s hottest brand: NXT.