Tyler Bate is great. The 19-year-old from Dudley, England, is the very first WWE UK Champion. Bate won a 16 man tournament, beating the dastardly Pete Dunne in the finals. 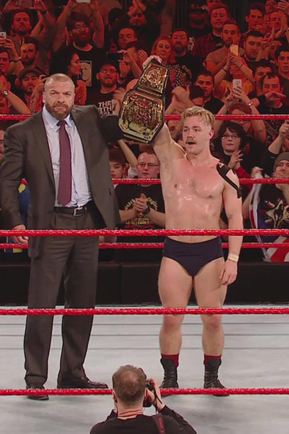 Repeating his actions against Sam Gradwell at the end of last night’s broadcast, Dunne took another sly shortcut attacking Bate at the end of his semi-final match with Wolfgang. Dunne clobbered Bate from behind and hurled him into the steel ring post injuring his shoulder. Bate would fight through the injury to win the title.

During the two night tournament on the WWE Network, Bate had to defeat Tucker, Jordan Devlin, Wolfgang and Pete Dunne to claim the title.

With Bate beating the mountain of a man, Wolfgang, and Dunne grounding high-flier Mark Andrews in the semi-finals, the raucous crowd packing the sold-out Empress Ballroom Blackpool, England, was solidly behind Bate.

One half of the Moustache Mountain tag team with Trent Seven, Bate slapped Dunne in the face instead of shaking his hand at the start of their match and dropkicked him down to the canvass.

With both men refusing to release a collar and elbow tie-up, Dunne and Bate rolled under the ropes together to the floor. Fists started to fly as they battered each other with haymakers around the ring. Back inside the ring, Bate gained some measure of revenge by posting Dunne.

Bate spun whirled Dunne in an airplane spin three times before releasing him. Showing incredible strength, Bate picked Dunne off the mat despite being locked in a triangle submission hold and slammed him. Dunne escaped the ring only to be hit with a rolling suicide dive and a splash from the top rope back in the ring.

Dunne hit his Bitter End finisher but Bate refused to be pinned and spiked Dunne with a brainbuster for a two count of his own.

The match broke down into another slugfest with Bate hitting two cartwheel kicks off the ropes and his Tyler Driver ’97 finisher to win the WWE UK Championship in grand style as Dunne scurried off to the back.

With the tournament over and a champion named, all eyes are on the WWE to follow-up with a timely announcement of a weekly UK-centric show on the WWE Network to capitalize on the hype generated for what was an exciting and very successful two-night event in the UK.

Gradwell’s back is taped up, the result of Dunne’s attack last night. Strangely, the crowd is behind Dunne. Gradwell pays Dunne back by suplexing him on the rampway. He executes a top rope missile drop kick but ends up hurting his back more. Dunne knocks Gradwell off the ropes to the floor further injuring his back some more. Powerslamming him into a corner, Dunne scores the pinfall. Despite already beating Gradwell, Dunne hits him with the Bitter End finisher just for the heck of it.

Connors fairs a lot better as far as his performance goes than last night but the crowd is solidly in Andrews’ corner. Andrews hits a wicked cannonball dive off the barricade. Andrews puts away Connors after dominating most of the match with his aerial skills.

Wolfgang shows more of his charisma and wide-ranging ability, which makes you wonder why the WWE hasn’t offered him a contract. He can brawl. He can fly. He has a great persona.

Wolfgang stuns the crowd with a moonsault off the barricade but hurts his knee in the process. Wolfgang tries to take Seven out with his finisher – a moonsault from the top rope – but misses his target. A swanton on Seven’s spine earns him the three count though.

Bate takes all Devlin can dish out. He ends the match with a haymaker punch and a Tyler Driver ’97.

Dunne drives the wind out of Andrews’ sails with an X-Plex suplex on the ring apron and then follows up with another on the rampway. The superb bout, the best of the evening next to the main event, goes back and forth but Dunne drops Andrews with another X-Plex and his Bitter End finisher. Get Andrews on 205 Live. His matches with Perkins would be off the chain.

Wolfgang dwarfs Bate but it is said he might have an injured knee and possible broken nose after his match with Seven. Wolfgang’s time in the tournament ends when he misses his Howling splash but hits a brutal tackle. Bate still kicks out and puts Wolfgang away showing that despite his size, he can match muscle with a heavyweight.

In a special exhibition match, the self-proclaimed King of the Cruiserweights takes on the NXT signee Tommy End, who is billed as such and not his NXT name, Aleister Black. End really takes it to Neville but comes up short.

One of the founding managing editors of SLAM! Wrestling, John Powell is a veteran entertainment journalist currently covering Big Brother., Survivor for Shaw and the video game industry for G4TV.. Check out his comic book Cover 2 Cover blog and his Nerd TV YouTube updates here . John can be reached at [email protected] or @POW2112 on Twitter.