Fernand Ste-Marie, who died on October 29th at age 76, might be the second most famous wrestling announcer in Quebec history. After all, it’s pretty to compare to his father-in-law, Michel Normandin.

While Normandin voiced the Montreal Canadiens, baseball’s Montreal Royals, and hosted pro wrestling, Ste-Marie did pretty well himself, and is best known for being the French-language frontman for Grand Prix Pro Wrestling in Quebec, and as a radio host doing primarily sports on sports commentator on CKVL from 1965-1975. 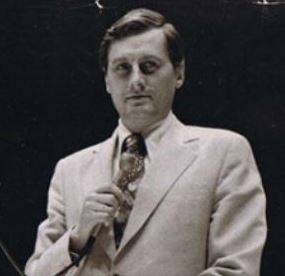 Fernand Ste-Marie at work announcing in the ring.

Ste-Marie was born December 9, 1939, growing up on a farm, where his father grew vegetables. In 2011, he recalled how wrestling brought the community together.

“In 1952, I was 12 years old. I was looking at the TV for the first time on Radio-Canada, French TV,” Ste-Marie said, recalling the likes of Larry Moquin, Johnny Rougeau, Killer Kowalski, and Don Leo Jonathan, airing on Wednesday nights. “The neighbors, the other farmers, came around to see the wrestling.”

Moquin was his second cousin, as his father’s mother was a Moquin. “We were watching Larry on TV, and I saw all the big stars.”

What he didn’t realize is that the host of La Soiree de Lutte, Michel Normandin, would one day become his father-in-law when Fernand married Marie Normandin. Though they divorced years ago, and have a son and daughter together, Ste-Marie kept good terms with Marie and continued to visit her as she struggles with Alzheimer’s disease.

At a celebration of Mad Dog Vachon’s induction into the Quebec Sports Hall of Fame in 2009, Ste-Marie was still in awe that he ended up in pro wrestling, alongside many of the names he saw as a youngster. “I introduced those wrestlers on TV, my friend! Would you believe that?”

Most fans know Ste-Marie as the ring announcer for Grand Prix. Historian Gary Will wrote about Ste-Marie’s style on his website: “[He] did bilingual introductions that ended with ‘C’est lui, that’s him…’ followed by the wrestler’s name. Funny thing was, I immediately understood the ‘c’est lui’ part, but it took years until I clued in that the end of that line was ‘that’s him.’ All that time, I thought it was something in French I didn’t understand!”

Ste-Marie had stories on many of the stars of the day, like Andre the Giant.

“The Giant, I interviewed him on TV many times. Big voice, he didn’t have to talk that much. The image was great. I’m 6’1″, he was 7’4″, so two-minute promotional interviews for TV, it was great,” said Ste-Marie. “He was really good on TV, talking French very well, like Edouard (Carpentier). Edouard was speaking marvelous French, not French-Canadian style, but French from France. Same thing like Jean Ferre. He had the vocabulary and he was very good on TV. In person, I used to go to the bar with him. I got home once at 2 o’clock in the morning, and I had three kids. We had a few drinks. Then my eldest son woke up and saw the Giant. Oh boy! My wife didn’t say a word. Then he got another beer, and took a cab. I drove him many times. We’d go to certain bars in Montreal.”

It doesn’t take much to picture the looks Andre the Giant would get walking into a tavern. “Imagine you enter a bar [with Andre], a very popular bar at that time in downtown Montreal, not far from the Montreal Forum, and everyone would quiet. He used to call for six beers in a row. When he took the small Molson or Labatt beer with one of his hands, you didn’t see the beer!”

When Edouard Carpentier’s name comes up in conversation, Ste-Marie launched into his introduction: “Ladies and gentlemen, born in Paris, now living in Montreal, Quebec, Canada, weighing 225 pounds, everybody knows him, c’est lui, it’s him, Edouard Carpentier.”

“When he came to Montreal, he was handsome. Gymnastic-guy, people were crazy about him. He looked spindly. But Edouard didn’t speak that much to people. He didn’t mix that much, even with the other wrestlers,” recalled Ste-Marie. Later, Carpentier was a part of the ownership of Grand Prix, and a colour commentator, taped in a TV studio in Sherbrooke.

“He knew wrestling by heart, all the techniques and everything, so he was a very good wrestling commentator, that’s for sure,” said Ste-Marie. 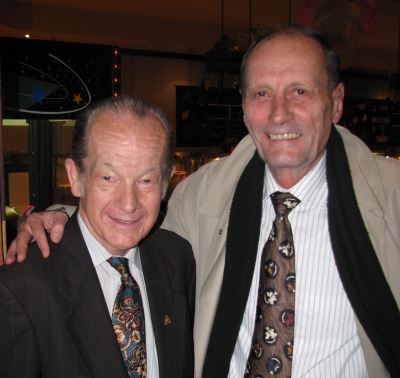 When Grand Prix shut down, Ste-Marie went to work for Johnny Rougeau’s promotion.

“He said to me, ‘Fernand, Grand Prix went bankrupt. You made good money, but I’m going to pay you half what you had at Grand Prix. But my cheque will be good.’ He used to pay me cash, with a brown envelope,” recalled Ste-Marie. “He was a real businessman. He was a real promoter.”

Ste-Marie’s time at CKVL including covering the 1972 Olympics in Munich, among other big events. Despite the Andre the Giant stories, he said that he didn’t socialize a ton with the grapplers. “Usually I didn’t go with wrestlers after the wrestling because I was on the air the next morning at 6.”

In 2011, he had retired from radio and television and was helping out with surveys for a marketing firm.

Ste-Marie died at Notre Dame hospital on Saturday, October 29, 2016. He is survived by two children from his first marriage to Marie Normandin, his son Marc, daughter Pascale (Gilles Chamberland); and a son, Charles, from his second marriage to the late Micheline Boyer; his sisters Hélène, Jocelyne, Yolande (Paul Trépanier), Claire (Chantal Gauthier), and nieces and nephews.