Mat Matters: What’s the next step for WWE women?

Do not discount how important Sunday’s WWE Women’s title match between Charlotte and Sasha Banks is. When one considers that women’s wrestling matches on WWE PPVs for many years were only given five minutes and now two women will be facing off in a Hell in the Cell match, the difference between now and then couldn’t be more striking. It very clearly demonstrates the growing importance and attention that women in the WWE have garnered. The Charlotte and Sasha Banks Hell in the Cell match is an opportunity to increase the stature of women’s wrestling in WWE, but along with that comes an interesting question: What is the next logical step for women in the WWE? 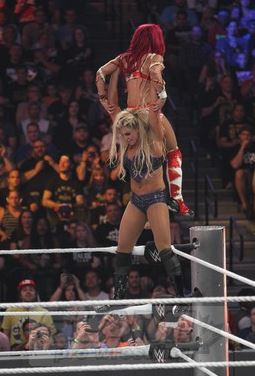 Charlotte and Becky Lynch have risen to heights before, including their battle at SummerSlam 2016. Photo by George Tahinos

Throughout the history of Hell in the Cell matches in the WWE many a superstar has found themselves elevated to a new level of stardom which has often cemented their status as a main event player. Yet, in this case of both Charlotte and Sasha Banks, along with their fellow Four Horsewomen Becky Lynch and Bayley, they have been regarded as the top wrestlers in the women’s division since their days in NXT. Consequently, if WWE wishes to capitalize on them as fully as possible they need to consider something that is likely to rile up several people in the company — give them the chance to compete for the other WWE titles including the WWE Universal Championship and the WWE World Heavyweight Championship.

The most often cited example of a woman winning a WWE title, other than the Divas or Women’s championships, is Chyna who won the Intercontinental championship on two occasions during the Attitude Era. It must be noted that at the time there was reportedly resistance within the WWE towards a woman becoming the Intercontinental champion, but Chyna’s title reign is one very much remembered by wrestling fans. During her time in WWE she achieved wins over Triple H, Kurt Angle, Chris Jericho, and Jeff Jarrett to name a few. Also, in the history of WWE and WCW women have won the Cruiserweight title and the Hardcore Ttitle which may point the way towards one option going forward.

Since the WWE reintroduced the cruiserweight division to RAW it is readily apparent to anyone watching that it has struggled to find its footing. Part of that has been the unrelenting focus of matching up the Cruiserweight Champion TJ Perkins against Brian Kendrick, which has failed to capture the imagination of the WWE Universe. Now just imagine if you inserted Bayley or Sasha Banks into that program. Either one would instantly re-energize the program and, with their unique wrestling styles, they would add to the quality of the matches. Plus, the cruiserweight division is one where Bayley or Sasha Banks’ smaller statures compared to some of the male wrestlers wouldn’t be an issue.

For Becky Lynch, being she is already on Smackdown, having her follow in Chyna’s footsteps and battle Dolph Ziggler and The Miz for the Intercontinental Title would be a natural progression for her. You can practically hear the promos now from The Miz and Ziggler, talking down to Lynch, and ending with the Lass Kicker wrenching their arms out of their sockets in response. After all, Ziggler and The Miz have faced each other so many times over the years that they desperately need something new and exciting added and Becky Lynch would bring that in spades. Also, by taking this step it would allow WWE to place the Smackdown’s Women’s Title on Alexa Bliss, provide space to bring up more talent from NXT to challenge her for the title, and reset a division which has been dominated by Lynch since she became Women’s Champion (even if she was off injured for a spell).

So where would that leave Charlotte? The answer is she would be challenging for the WWE Universal Title or the WWE World Heavyweight Title. She has the height, athleticism, wrestling skill, and the ability to connect with the audience as either a babyface or a heel, much like her father Ric Flair did, to be a credible challenger. Since her call up from NXT, Charlotte has continued to grow as a performer, and there is no reason to think that wouldn’t continue if she had matches against Chris Jericho, Seth Rollins, Finn Balor, Roman Reigns, AJ Styles, or Kevin Owens. Additionally, one of the biggest arguments in the past against a woman holding the top title in a promotion would have been that compared to the male wrestlers she was too small, but WWE has had several wrestlers as the WWE Champion over the years who were definitely not giants. Probably the most recent and notable example was Daniel Bryan who beat Triple H, Randy Orton, and Batista to become the WWE World Heavyweight Champion at WrestleMania XXX. And no one could debate that she’s in better shape than, say, Kevin Owens. 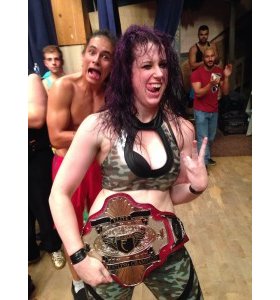 Still not convinced? Sometimes changes happen on the independent wrestling scene that eventually catches the notice of the bigger companies and filter their way up to WWE. Here in British Columbia, Nicole Matthews has held Elite Canadian Championship Wrestling’s top title on two occasions. Between the two title reigns she held the ECCW Championship for a total of 217 days, thus proving very definitively that there is no reason that a woman cannot be the standard bearer for a wrestling company. She’s hardly the only woman to be a champion in a male-dominated promotion.

It is quite clear that WWE has been trying to establish a new star who could crossover into the mainstream media in order to increase the company’s profile and draw more eyeballs to their programming. The unsuccessful attempts to establish Roman Reigns as that flag bearer is a very clear indication of this, but it demonstrates WWE Creative’s failure to understand that their audience is looking for something different. All one has to do is look at the last two wrestlers who did successfully crossover into the mainstream: Daniel Bryan, who has since retired; and CM Punk who left the company to pursue a mixed marital arts career. Neither of them fit the traditional image of what the top star in the WWE should be and likely whoever becomes that out of this generation won’t be either.

So if one of the primary objectives is to achieve mainstream attention positioning Charlotte to challenge for the WWE Universal Title or the WWE World Heavyweight Title would almost certainly achieve that. As well, it might garner an increase in female viewership. If this is something WWE Creative would truly consider doing, the first step would be for Charlotte to enter the Royal Rumble, win the match, and go from there.

Will this ever happen? Well, just as there was during the Attitude Era, there is little doubt that there will be resistance from many people within the company to such a shift. How much resistance is difficult to say and it would require buy-in from at least several of the leaders of the WWE management, and locker room, including Vince McMahon. However, if WWE is serious about having a true “revolution” then allowing women to compete and hold titles other than the two Women’s titles is both a smart move and perhaps a necessary one.