Jim Ross high on Nakamura, down on three-man booths

When ranking the greatest pro wrestling commentators of all time, it would be a travesty not to include Jim Ross near the top of the list.

Having a commentary career that has spanned over four decades, Ross’ distinct style of announcing has made him stand head and shoulders above the rest.

But it wasn’t just behind the microphone where Ross’ talents were used in WWE, the iconic voice of the company was also vice president of talent relations for many years hiring guys such as John Cena, Randy Orton and Brock Lesnar. With WWE entering into a ‘new era’, Ross believes there are two guys in NXT who should come up to the main roster and will make an immediate impact.

“Shinsuke Nakamura is a legitimate, bona fide star,” Ross exclaims. “Depending on your perspective of why he’s on NXT, and what NXT is in the big picture, he’s like the big ringer in NXT. He is by far the biggest star there — because I assume Samoa Joe’s coming up, but I don’t know. Right now, assuming Joe gets called up — which I think he should: he’s not getting any younger. I’m a big fan of Samoa Joe, so take that for what it’s worth. I’m biased, I would book him tomorrow because I like his work. 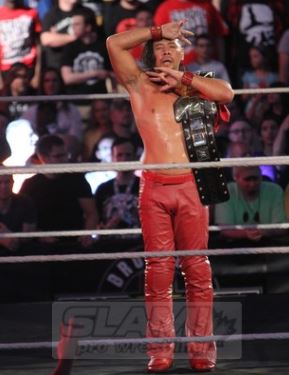 “Shinsuke really has an unknown ceiling. It’s uncharted waters, because someone of his ethnic background being put into such a high profile — presumably babyface — role in the company, would be groundbreaking. So I really do believe in him, and I think he’s a great hire. Obviously he needs to continue to practice his English, so that he can communicate to his biggest fan base. “Speaking English is a necessity to a sports entertainer in today’s marketplace, him being no exception.”

Ross also picks out one member of the roster who was on to big things until a cruel injury temporarily derailed his career. Having dealt with talent who’ve been through situations like this, Ross is sympathetic and offers advice for Finn Balor.

“If you let it depress you, and affect your mindset and your attitude, then it’s very disruptive. If you refuse to let that self-doubt and the ‘why me’ mantra seep into your psyche, then it can certainly be.

“I fully expect Finn Balor to return better than he left, here’s what he knows, here’s what he can build on. Number one — he knows the company had great confidence in him, as a result of how he was booked at SummerSlam. He’s already cleared a major hurdle, he has the confidence of the front office, and they believe that his abilities, and his character, and who he is, is a great fit for them.

“Him being the first universal champion, I think, spoke volumes in that respect. So when he gets healthy, it’s not like he’s gotta start all over, to hope to finally get over — he’s over, people like him, his character is over. Now he’s got an even better story to tell, and if this story is documented between now and the time he returns, periodically, there will be massive anticipation for his return.

“It’ll be very significant in the WWE world, so you’ve gotta take all of these elements that you’re faced with — the hand that you’re dealt — and play that hand the best you can. The only thing that’s logical is to come up with a plan. To make sure that he’s getting the best medical care, that he’s being left alone so that he can rehab, and keep his focus on that, and then periodically check in and get some footage of the road back. And the road back is a long one. He’s got to overcome physical and mental injuries, so it’s a great story to tell.”

With Ross talking about talent that have come through the Performance Center and NXT it seems appropriate to ask Ross about what he feels on the three man commentary booths dominating both Raw and SmackDown in WWE.

“The three-man booths on the main roster are a thing that WWE likes. I think it feels big. It’s three talking heads instead of two, so you super-size your announce team by one body. I think there’s something to be said for that. On a personal level, it’s not my favourite. I’ve worked on teams, three-man teams, where I really had fun. One of my favourite memories was working, I think it was SummerSlam ’96 with Vince [McMahon] and Mr. Perfect, and it was a helluva lot of fun. And then Lawler and I teamed with Vince, and I thought that was pretty damn good, more often than not.

“So you know, it can be done. It’s just that I’m stubborn, I guess, and it’s not my favourite thing. I think that we don’t focus enough audio on the video that we’re seeing on our screen, and so when you get guys that are practicing that philosophy, and there’s three of them, it really can be disconcerting sometimes — what you’re seeing and what you’re hearing being two divergently different things.”

Ross went onto explain his thoughts on WWE’s announcing style these days.

“I think there’s a lot of guys who are relying more on individual spots, as opposed to telling a linked story — a narrative — in the ring, so you know, things like that. But I think sometimes those things in the ring are more trends than ‘this is the way it’s going to be going forward.’ I think sometimes we go through trends and sometimes they are good trends and sometimes they are not. Those are the main things I can think of off the top of my head that are different on a significant level.

“Having said that, I think that WWE has done a nice job with the announce teams. I thought that recently Tom Phillips and Corey Graves at NXT Takeover: Brooklyn had as strong a broadcasting night as anybody.”

Jim Ross will appear with Jim Cornette for ‘The Rise of the Attitude Era’ at London’s Islington Academy Hall on October 5. Tickets available at www.insidetheropes.co.uk.