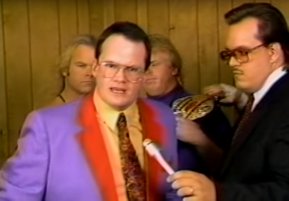 With footage of Smoky Mountain Wrestling (SMW) now available on the WWE Network, what is old is new again.

Launched in 1991, SMW was the brainchild of Jim Cornette and lasted approximately four years, and a recent milestone quietly passed by — the 20th anniversary of SMW’s closing — but that subject is a story for a different time.

The inaugural Bluegrass Brawl took place at arguably the height of the promotion’s popularity on April 2, 1993 in Pikeville, Ky. The event drew a reported 2,000 fans at the Pikeville College Gym.

The event begins with the playing of Kentucky’s official state song “My Old Kentucky Home” followed by announcers Les Thatcher and Lance Russell running down the card. Brian Matthews, a.k.a. Scott Spangler, handles the backstage interviews. To warm up the crowd, Robbie Eagle beat Rip Rogers.

The late Archie “The Stomper” Gouldie, a.k.a. the Mongolian Stomper, makes his way to the ring as the theme from John Carpenter’s Halloween plays. Morgan gets the jump on The Stomper by attacking Gouldie as he enters the ring. The Mongolian Stomper quickly goes on the offense and takes the fight outside. Morgan is rolled into the ring and soon falls victim to the Cobra Clutch in an opening squash match.

Matthews interviews “Primetime” Brian Lee in the locker room about his upcoming Russian roulette roll of the dice match with Kevin Sullivan. Lee claims tonight will be his night and then heads to the ring to roll the dice.

What exactly is a Russian roulette roll of the dice match? According to Lance Russell, “A dice will be rolled. One number will come up — the top number — and that number has a matching ruleset on our sheet. If it is a number one, it is a prince of darkness match where both men in the match will be blindfolded. If it is a two, it will be a stretcher match where the loser must be carried out on a stretcher. Now if it’s a three, it’s a handicap match where Brian Lee will be in there with Kevin Sullivan and The Nightstalker. If it is a four, the ring is going to be surrounded with fire, and they will partake in the match inside a ring of fire. If it is a five, it is going to be the Singapore spike match, and this is a box that will be placed on each of the four corners. Now inside only one of the boxes will be the golden spike, and it will be permissible to use it for the wrestler who can find it … and number six, the final number. This is Brian Lee’s choice: any type of match he wants.”

Lee rolls a six and chooses the Singapore spike match and shouts, “Kevin Sullivan, I am going to kick your ass right here in the Bluegrass Brawl!” Keep in mind this is edgy language for 1993. The camera then jumps backstage to “White Lightning” Tim Horner discussing his next match with The Nightstalker. For the uninformed, Horner was actually part owner of SMW with Cornette prior to a falling out.

Match #2 — Tim Horner vs. The Nightstalker

KISS’s “War Machine” hits and no, it is not Taz. The Nightstalker makes his way to the ring. The Nightstalker would make his debut in the World Wrestling Federation a month later as Adam Bomb. “The Thunder Rolls” by Garth Brooks blares, and the babyface Horner makes his entrance. The Nightstalker plays up his strength while Horner utilizes his agility in a typical big versus small matchup. Both hit nice dropkicks on one another while Nightstalker shows some of his high flying arsenal for a guy his size. The Nightstalker throws Horner over the top rope, which results in a disqualification as was the rule at the time. “The Taskmaster” Kevin Sullivan cuts a quick promo backstage hyping the Singapore spike match against Brian Lee.

The Nightstalker joins Sullivan at ringside while Tim Horner returns to be in Lee’s corner. Both The Nightstalker and Horner are handcuffed to the ring post in each of their partner’s corner. The late, great Mark Curtis (Brian Hildebrand) serves as the official for the match.

The size mismatch between the stocky Sullivan and large Lee is obvious. Perhaps Les Thatcher best describes the match saying, “You talk about bizarre things Lance Russell. This has got to be the most bizarre.” However, the fans are into the fight, which is all that matters. Sullivan inadvertently hits The Nightstalker and manages to locate the spike for a moment but drops it. The Nightstalker picks up the spike and refuses to return it to Sullivan. Lee gets the rollup and win over the distracted Sullivan. Sullivan then attacks The Nightstalker who is still handcuffed to the ring post before getting loose and retaliating.

We cut to the back with Tracy Smothers hyping his Tennessee chain match with Dirty White Boy for the Smoky Mountain Wrestling Heavyweight Championship. There is a jump to Dutch Mantell interviewing the late East Tennessee legend, Ron Wright, who bestows his beloved chain to Dirty White Boy. There is another cut to a taped promo of the champion Dirty White Boy in “Central Park” that oddly enough looks a lot like Tennessee in late March or early April … ahem. Three-plus years before Pillman’s 9 millimetre angle on Raw, Dirty White Boy is seen sporting a handgun in this video explaining what he is going to do to Smothers in vivid detail.

Ron Wright is ringside in a wheelchair and the New York Yankees gear is a nice heel touch for both Wright and Dirty White Boy. The two opponents are bound together at the wrist by a rather long log chain. Again, I will turn it over to legendary announcer Lance Russell for the rules of the match: “In the Tennessee chain match, the only way to win is for the wrestler to touch all four corner turnbuckles in a row without your opponent scoring an offensive blow. If he does strike that blow and score, the count is stopped, goes back to zero and it starts all over again.”

Interestingly enough, there is some great in-ring psychology used in this matchup filled with peaks and valleys. Smothers gets colour at one point during the match with Dirty White Boy also sporting the crimson mask later in the fight. Tracy Smothers wins the championship in a finish nearly identical to the Caribbean strap match between Stone Cold Steve Austin and Savio Vega three years later at In Your House 8: Beware of Dog 2.

All three factions are interviewed separately in the backstage area prior to the match vowing to destroy one another in the three-way street fight. Bobby Eaton and the reigning SMW tag champions, The Heavenly Bodies, along with the Louisville Slugger Jim Cornette enter the ring first. To say Cornette had heel heat would be an understatement as fans begin to throw garbage into the ring which continues as the Stud Stable and Mantell make their entrance. The adverse crowd reaction is quickly offset by the shrieks for the Rock ‘n’ Roll Express and Arn Anderson who are clearly the babyface team in this matchup.

Thatcher describes the stipulations stating, “we’ve got nine wrestlers, three teams and the first man on any team to be defeated, the entire team will be eliminated … we’ve got a riot on our hands.” Well, the event is called Bluegrass Brawl for a reason, and this match lives up to the name. Trashcan lids, chairs and wooden boards are used within the opening minutes of the match. Fans also continue to throw debris throughout the fight.

“Beautiful” Bobby Eaton has a tire wrapped around his head and neck at one point. Keep in mind that ECW was still known as Eastern Championship Wrestling in 1993, and this match style is very much in line with the Tennessee wrestling Cornette grew up on, which he details in a commentary on his website.

Robert Gibson pins Fuller eliminating the Stud Stable from competition. Arn Anderson brings a fire extinguisher into the ring and sprays the Heavenly Bodies and Eaton. A table is brought into the ring, which must have been imported from Japan because the furniture piece refuses to break after Prichard, Eaton, Lane, and Cornette are all throw into it one by one.

Gibson applies the figure-four leg lock to Cornette; however, Prichard climbs the ropes and hits a loaded knee drop from the top on the prone Gibson, scoring both the pin and win for his team.

Overall, the Bluegrass Brawl is a good place to start for fans wanting to experience one last vestige of the wrestling territories in North America.

“Retro” Ryan Nation holds a BS in English-Journalism, an MS in Technical and Professional Communication and he is a recent 2015 alumnus of UCLA’s Professional Program in Screenwriting. E-mail the writer for hire at [email protected]

Jim Cornette was the creative mind behind Smoky Mountain Wrestling and an on-screen manager.