Ring of Honor celebrates its 14th anniversary on February 26 in Las Vegas, live on pay-per-view. Former ROH World champion Adam Cole, who has been with the company nearly seven years, could have a major part to play in these celebrations as he looks set to do battle against Kyle O’Reilly and Jay Lethal in a triple threat match for Lethal’s ROH World title. 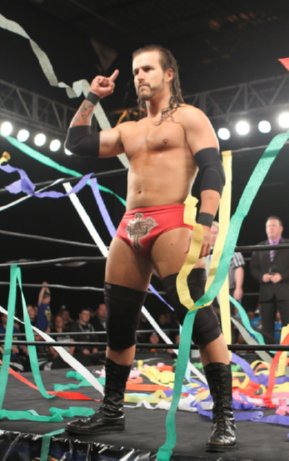 Cole hopes to win the title, which has eluded him for two years and notes how much the company has changed since his tenure on top.

“It’s pretty cool to see how much we’ve grown in two years, and I think even two years from now we’re going to grow even farther. It’s an exciting time.

“Going out to Vegas and doing shows there, putting a lot of effort into the Japanese relationship with New Japan Pro Wrestling, running shows out in the UK with Preston City Wrestling — I think all of this is an effort to try and continue to grow our brand and make it bigger. And in turn, we’re creating relationships with some really great wrestlers all over the world, so it’s been pretty cool.”

O’Reilly is an opponent that Cole knows very well as the two teamed together when they both first entered ROH, something that Cole has not forgotten.

“Either way, I’ve had some of my very best matches with Kyle, and I think he’d say the same with me. I’m excited that he’s in this match up. But like I said — I don’t know what it is, but we always bring the best out of each other.”

In fact it was just this past December that O’Reilly and Cole squared off against each other in a heated grudge match at Final Battle, which Cole remembers fondly and is eagerly anticipating Lethal adding an extra dynamic to the contest.

“I like that kind of pressure, because generally speaking, that’s what all three of us thrive on. Kyle thinks like that, Jay Lethal thinks like that and I think like that. That’s really what wrestling is all about, creating that nervous, high-pressure situation. And the cool thing is that the pressure for this one is high, but it’s not that impossible pressure that’s created by some dream matches that happen.

“Like a lot of times when, say, a big Japanese star comes over and faces a big American star, those are really hard. Fans create this impossible expectation, and that’s very difficult. I don’t think we’re in that realm, but I do think we have to set the bar.