Where there used to be a whole bunch of wrestling magazines on the shelves, now there are but a couple. One of the casualties was Power Slam, which was based in the United Kingdom. To celebrate his years working at “PS,” editor Findlay Martin has created an ebook that is as immense and wide-ranging as the publication had been. 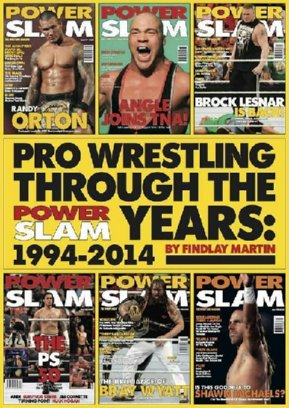 It came to our attention through two regular SLAM! Wrestling photographers, George Tahinos and Mike Mastrandrea. They both had their work published in Power Slam, and spoke positively about Martin, so some questions were cobbled together to get a better idea of the scope of the project.

Here’s our question and answer session with Findlay Martin:

Q: Why did you decide to write an ebook about your Power Slam days?

A: It felt like a natural progression. I had covered pro wrestling in a magazine format via Power Slam and its predecessor Superstars Of Wrestling from January 1992 to July 2014, and tackled the myriad stories during that period as they happened. Long before I made the decision to close the magazine, I had designs on writing a book on pro wrestling in general, and how it had evolved during my years as editor/publisher of a magazine. That’s what I’ve done with Pro Wrestling Through The Power Slam Years.

As the magazine did, I wanted to tackle a multitude of companies in the book — in the U.S., Japan and, to a lesser extent, the U.K. — and examine each promotion’s voyage through the years: where and why the company succeeded and failed, and why it folded, if applicable. I wanted to pore over each promotion’s influence on rival companies, and its dealings with other organizations.

I had almost forgotten that Vince McMahon performed as a heel for the first time in the USWA in 1993 as part of the talent agreement which existed between the WWF and the Memphis-based territory, and that Bret Hart wrestled as a villain when he collided with Jerry Lawler at the Mid-South Coliseum in Memphis that same year. None of this was disclosed on WWF television.

During my research, I was reminded that Brian ‘Lee’ Harris was recognised as Smoky Mountain Wrestling tag team champion with Chris Candido when he first appeared on WWF screens as the imitation Undertaker in 1994. One year later, the real Undertaker travelled to Smoky Mountain to face Unabom (the future Kane, Glen Jacobs) at SMW’s Super Bowl Of Wrestling card in Knoxville, Tennessee.

The book delves into the ties between the WWF and ECW in the 1990s, and Vince McMahon’s gradual realisation that he had to change his stance towards the WWF product, if he were to compete with WCW. So obstinate was McMahon in the mid-1990s, that was a lengthy process in itself. Clearly, McMahon did not want to revamp the formula, but WCW left him no choice. One must ask: would the Attitude era have even occurred, had WCW’s Monday Nitro not trounced Raw for so many weeks?What also fascinated me during the writing of the ebook were the stories behind the stories. There were often explanations behind decisions which seemed perfectly logical when they were made. Many genuinely believed that Vince Russo and Ed Ferrara — with their backgrounds in the fabulously successful WWF — would be the saviours of the floundering WCW when they were hired as creative writers in October 1999. As we now know, that didn’t happen. Hindsight is a great simplifier, as they say.

Q: Did you consider producing a physical book? (It seems like a big book!)

A: No. Had I produced Pro Wrestling Through The Power Slam Years in a printed format, I would have been required to significantly reduce the word count in order for it to be economically viable to produce as a printed book. The ebook is 245,818 words. It would have been a tome, had it been printed, as you say.

Speaking to a handful of authors who have written wrestling books over the last two years, I learned that more than 75 percent of each of their book’s sales had been achieved electronically — ebooks are the present and future of book publishing.

Q: How did you decide what and what not to include?

A: That’s the beauty of the ebook format: there is no word limit. Consequently, I was able to burrow into the characters and topics and companies, without restrictions.I’ve covered all the major events in U.S. and Japanese wrestling history over the decades, such as Vince McMahon’s steroid trial, Hulk Hogan’s move to WCW, the Monday night war, the purchase of WCW and ECW by the WWFE, the launch of ROH and NWA: TNA, the ascension of John Cena, the Benoit tragedy, the fall and rise of New Japan, WWE’s part-timer dependency in the 2010s, and so on.

Due to the freedom of the format, I was also able to write extensively about a variety of other wrestlers and subjects, such as:

Garbage wrestling king Atsushi Onita and his influence on wrestling in the West. Cactus Jack’s anti-hard-core gimmick in ECW from 1995-1996. Brian Pillman’s seminal ‘Loose Cannon’ persona. Steve Austin’s remarkable journey to the summit of Mount WWF, and his later bust-ups with Vince McMahon. The Rock’s seemingly incongruous heel turn at Survivor Series 1998. The peaks and troughs of the invasion angle in the WWF in 2001 (it wasn’t all bad, despite what many will tell you).

Shawn Michaels’ WWE comeback in 2002, and retirement in 2010 on his own terms. The brilliance of Edge’s “Rated-R Superstar” character from 2005-2006, and Batista’s flamboyant narcissist in the months prior to his exit from WWE in 2010. The ECW reunions. C.M. Punk’s refreshing heel character in summer 2009, and the short-sighted decision to shut it down in October 2009. The death of Mitsuharu Misawa. The squandered potential of the Nexus and so many other WWE performers in the 2010s. WWE’s progression into a recession-proof business. The rise of Daniel Bryan in WWE. The departure from WWE of C.M. Punk. The decline of TNA.

Deliberate omissions? I analysed in painstaking detail the decline of WCW throughout 1999 and 2000. Since so many of the same errors were made by TNA at various points in its existence — by the same people, not surprisingly — I felt that it would have been redundant to recount them as thoroughly when they were repeated in TNA.

Q: The ebook hasn’t been out long. Have you had much feedback?

A: Here in the U.K, I have received plenty of feedback. I’m going to refrain from blowing my own trumpet, and instead direct your readers to reviews of the book on Amazon’s U.K. site here.

Q: When/why did you make the decision to do a shoot/no kayfabe style of magazine as opposed to your earlier kayfabe/U.S. style magazines?

A: It was the next step. When the magazine was launched as Superstars Of Wrestling in January 1992, wrestling magazines were kayfabe compliant: old attitudes were hanging on. Wrestling became more transparent, in a sense, as the decade wore on, and the magazine followed suit.

That the pretense was dropped was a good thing for wrestlers, wrestling and the fans, in my opinion. Dating back to the 1970s, newsletters had acknowledged that pro wrestling was a work. It was about time wrestling and wrestling magazines caught up.

Q: Has a wrestler ever held a grudge about a Power Slam story?

A: Yes. Many have. In 1996, a company in the U.K. called Hammerlock Wrestling imposed a “press ban,” if you can believe that, which was at least partly attributable to a review of a live Hammerlock show which had appeared in PS in April 1996. Even then, this was a totally absurd notion. It led to no end of counterproductive sniping on the British scene on both sides. Eager to restore peace, I rang the Hammerlock promoter a few months later and negotiated a ceasefire, and covered a Hammerlock event for the magazine without incident the following year.

There’s a story in the ebook about Bubba/Buh Buh Ray Dudley’s reaction to a scathing review in PS of his match at ECW Wrestlepalooza on May 3, 1998. Then-PS photographer George Tahinos took the brunt of Dudley’s rage after he had clapped eyes on the offending issue. Fortunately, George is made of stern stuff. He could take it.

A: The worst interview I ever did was with Terri ‘Tori’ Poch, who longtime fans will remember as Terri Power in the LPWA. She said almost nothing of interest — which made for a fantastically tedious interview.The transcript of the conversation with the reticent Ms. Poch was utterly useless. Fortunately, it was not for publication in PS; the interview was conducted for a TV listings magazine in the U.K., which no longer exists. As I wrote in Pro Wrestling Through The Power Slam Years, “I did have feelings of guilt about submitting the interview with Tori for publication [in the listings magazine] . . . That emotion passed when the magazine folded without paying me for several columns.”

Best interview is a tough one. The interviews with the wrestlers who are no longer with us are etched most prominently in memory.

I interviewed Brian Pillman shortly after his Humvee accident, and Eddie Guerrero approximately six weeks after he had been fired by the WWF, following his DUI arrest.

Pillman signed a contract with the WWF the day after we spoke in June 1996. The timing of that was uncanny. When I interviewed Guerrero on December 27, 2001, he was diligently rebuilding his reputation on the independent circuit. Eddie returned to the WWF/WWE just over three months later.My second ebook will contain the best interviews in Power Slam history, along with new interviews and other original content. The Pillman and Guerrero interviews will be published in full in the second ebook.

Q: What made you decide to go with such a talented, handsome, cool and studly photographer from Toronto, Canada? (Gee, do you think Mike Mastrandrea submitted that one?)

A: I’ve never met Mike, and have no idea what he looks like. However, he did tell me in 2005 that he would have been in the running to be the new James Bond, had it not been for his Canadian citizenship. Since then, I have imagined that Mike is the epitome of suave sophistication, which was the image we sought to project at PS.