Don Fargo lets it all hang out in ‘The Hard Way’

The Hard Way by the enduring Don Fargo is no doubt the best book ever written by a many-named wrestler who cannot read or write. (And you read that right!)

At times rollickingly funny and other times introspective, it’s a great look into the highs and lows of a wrestling career.

Don Kalt was a Pittsburgh bodybuilder who became interested in pro wrestling. He got hooked up with a local few grapplers before arriving in Columbus, Ohio, at the offices of promoter Al Haft. It was there that he learned his craft, and met so many key people both to his own life, but to professional wrestling history too. 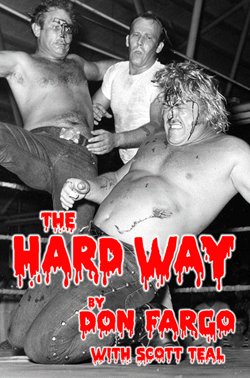 Top of that list, pally, is “Nature Boy” Buddy Rogers, who saw something in Kalt, just as Kalt later saw something in a 16-year-old Bobby Davis, who’d turn out to be a great manager for Kalt (when he was Don Juan the Magnificent) and later Rogers himself.

Author Scott Teal knows his wrestling history, and gets the key details out of Kalt about that historically important 1950s scene. The stories of Jack Pfeffer alone, perhaps wrestling’s most fascinating behind-the-scenes man ever, make the book relevant.

The biggest run for Kalt came as Don Fargo, partner to Jackie Fargo (Henry Faggart), as the bleached-blond Fabulous Fargos. They had the run of the wrestling world for a while, struttin’ and cuttin’ to headliner status from New York City to Nashville.

There’s far more to wrestling than just the in-the-ring stuff, though. We get to hear about how Pfeffer stood up for his boys, the Fargos, getting them more money, and allowing them to travel the country. We get so many ribs and jokes that it’s dizzying, quite frankly.

Consider two simple sentences with so much potential: “Another thing Jackie and I used to do was walk around the dressing room naked. We did it because it made the other guys uncomfortable.”

From that premise, there’s butt cheeks sporting cigars, driving down the highway naked, and oh so many other laugh-out-loud moments that your spouse might question your sanity at the laughter coming from the other room. You will never look at a toothbrush or a hammer the same way again.

But there were SO many other personalities and characters that Kalt portrayed, like Don Stevens, partner of a young Ray Stevens, and Jack Dalton. And perhaps more impressively, he LIVED those characters. A big part of the book are the tales of his guns, his life as a biker, and just all-around unpredictable guy. There probably should have been a rap sheet and mug shot included. A warning to the guys—some of the hijinks are hard to read about without squirming!

Thankfully, Teal has once again gone over and above with the photos too, a regular standard for his Crowbar Press publications. There are pics of Kalt in all his gimmicks, as well as lots of shots of other wrestlers and promoters.There is no denying that Kalt was an incredible worker who took each one of his characters to the max. “Every gimmick I did, I’m the only guy that lived it,” said Fargo in The Pro Wrestling Hall of Fame: The Heels. “I wore my legionnaire’s outfit on the streets. I wore my cowboy and gun shit on the streets. I did all that. Nobody else did it. They would come to the matches, be who they were, and when they left, they went back to a normal life. Not me, I stayed in costume 24 hours a day.”

“Normal life.” That’s a funny term coming from Kalt. You won’t be far into the book before you realize that his idea of “normal” is very, very different than your own.

And that’s the main reason to read The Hard Way.