Hulk Hogan has apologized for his racist remarks from eight years ago in an interview with PEOPLE Magazine.

His comments come in response to World Wrestling Entertainment severing all ties to him, ending his legends contract and removing all references to him on WWE.com — including its WWE Hall of Fame. 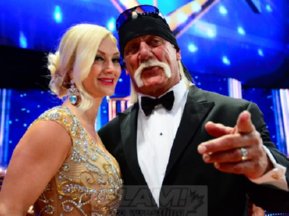 “Eight years ago I used offensive language during a conversation. It was unacceptable for me to have used that offensive language; there is no excuse for it; and I apologize for having done it,” Hogan said in a statement exclusively to PEOPLE.

The original transcript and its controversial content was originally published online by the National Enquirer.

“This is not who I am. I believe very strongly that every person in the world is important and should not be treated differently based on race, gender, orientation, religious beliefs or otherwise,” Hogan told PEOPLE. “I am disappointed with myself that I used language that is offensive and inconsistent with my own beliefs.”

PEOPLE also talked to Hogan’s lawyer, David Houston, who confirmed that Hogan had resigned from WWE.