Mat Matters: Clawmaster Zordani was a key part of the historian community

The name Jim Zordani won’t mean anything to most wrestling fans; even his online handle of Clawmaster won’t ring many bells. But to wrestling historians, Zordani’s death on Friday at the age of 50 is a kick to the gut.

It’s a small community to start with, those of us obsessed with wrestling ephemera and making sense of the results as the grapplers of the day travelled from town to town.

And now there’s a hole in the community. 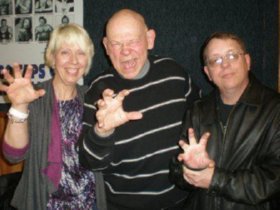 Zordani, or Clawmaster, was a Chicago guy through and through (meaning he loved his Bears, hated the Packers, and always believed that next year would be THE year for the Cubs) and was always willing to help people.

He was one of the key figures behind the scenes for The Pro Wrestling Hall of Fame series of books that I worked on with Steve Johnson.

“The first heel I ever liked (rooted for) was Sheik Farhat. I’d never seen anybody like him when he came to Indianapolis and Chicago during the latter part of 1974,” Zordani once told us in a rare revelation about his past. “Sheik throwing fireballs and carving up his opponents was so cool to me that I even dressed up as The Sheik for Halloween. I think I was in 5th grade. LOL!!”

Another tidbit was over another Midwest star: “The only heel that ever frightened me was Mad Dog Vachon. It was the way he looked into the camera on interviews. I was petrified as a youngster. Just the look in his eyes scared me.”

Often, Jim would dig long and hard to help us nail down exactly when someone made their professional wrestling debut. Here’s a good example of a different kind of debut:

His thoughts are sprinkled throughout the Online Wrestling Community, at places like KayfabeMemories.com and the WrestlingClassics.com newsboard. He was never a braggart or condescending of others who were seeking information. Consider that he had a full run of The Wrestling Observer newsletter and had subscribed for, well, forever, and that alone puts him in a rare listing of wrestling people.

Barry Rose, an expert on the Florida wrestling scene, posted his thoughts on Zordani’s Facebook page: “What a great guy and all around terrific friend he was. Though he’d never refer to himself as a ‘wrestling historian’ as he was the most humble guy ever, he was the true definition of one. We communicated almost daily and I’ll miss his sense of humor. RIP Clawmaster.”

A quick search through my own Word documents brought up dozens and dozens of files where he contributed in some small way.

Consider an exploration we were doing of the Crusher vs Mad Dog Vachon feud, where he was able to help us better understand what made the long-lasting feud work: “The [Verne] Gagne/Mad Dog rivalry paled in comparison to the one between Crusher and Mad Dog as Vachon continually ducked Gagne during Mad Dog’s AWA title reign. Vachon avoiding Gagne was an angle the AWA indeed did play up. In reality, Mad Dog was anchoring the Omaha portion of the AWA territory and only appeared in the AWA’s home base of Minneapolis/St. Paul once a month or so. The Mad Dog vs Crusher feud set attendance records and eventually morphed into Mad Dog & Butcher [Vachon] against [Dick the] Bruiser & Crusher.”

Steve Johnson shared his thoughts on Zordani: “I have about 10 years of emails with Jim stored away — little stuff, yes, but important to telling the story of wrestling properly. Like the day Bob Remus became Bob Slaughter (or Sergeant, if you will). A Fabulous Kangaroos match from 1961. Memories of Bobby Heenan, his favorite bump-taker, in the ring. Jim was a go-to guy on all things AWA, and, as time went on, match results generally. Our little community of researchers is going to miss him.”

Though I know I said thanks to him many times for his help (as did Steve), and he was always on our list of comps for the books, racking my brain, I don’t think we ever met in person. He didn’t go to the usual conventions, like the Cauliflower Alley Club in Las Vegas that attracts so many who love professional wrestling, and never made the trek to the George Tragos/Lou Thesz Professional Wrestling Hall of Fame in Iowa for any of the induction weekends that I went to.

So given that it was a professional relationship we shared, it’s weird to think about him being gone, having passed away in his sleep overnight on Friday, his body only discovered yesterday.

Many will have known him better than I ever did, but I can say, without hesitation, that my own writing and my own knowledge is far richer for having Jim Zordani — Clawmaster! — in my life for the time that he was.