Mat Matters: Reflections on one year writing about wrestling

My first year as a wrestling journalist has been exciting for this long-time fan of professional wrestling. When you get to meet your childhood heroes, wrestling legends, and the up-and-comers in the sport, it certainly is a rush.

This new sideline started as an accident. By day I am an elementary school teacher; my colleague Kerry Felstead and I thought it would be great for the kids to meet a wrestler who had such a colourful history. The Destroyer graciously agreed to come to my school and he regaled the students with tales from his coaching, wrestling and teaching background. They liked him, but that turned to love when one kid asked him if he ever wrestled The Rock. The Destroyer didn’t miss a beat and said, “I wrestled his grandfather.” That cemented him as a superstar in the minds of the students. 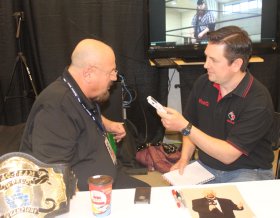 Howard Finkel is interviewed by Caleb Smith at the Niagara Falls Sports Expo in March 2014. Photo by Greg Oliver

I contacted SLAM! Wrestling producer Greg Oliver about covering the event. He suggested that I do a quick write-up for the site. Being a long-time reader of the site I was happy to oblige. From there I asked if I could write a few more stories.

My first assignment was to go to a Buffalo Championship Wrestling event to interview “Maverick” Matt Milan. I was very nervous and went to the show early to do my interview. The interview went well and I have enjoyed talking to Matt at events over the last 12 months.

To talk to the legends and heroes of my youth has been such a thrill. When Ivan Koloff phoned my house for an interview I did the happy dance around my kitchen. Finding out that these guys you watched on TV for years are nice fellows was neat. Ted DiBiase, J.J. Dillon and Bill Eadie were such humble and genuine people and very different from their wrestling personae. Going to the Niagara Sports Expo as a member of the press and getting to interview Howard Finkel and Tugboat was super. That same day I had the thrill of spending a few minutes with baseball legend and WWE Hall of Fame member Pete Rose. Pete, who had seemed a little grumpy when I approached him, lit up when he found out that I wanted to talk about wrestling.

Meeting the future stars of wrestling has been fun as well. To hear the enthusiasm and passion that they have for wrestling is exciting. Guys such as Jamin Olivencia, Johnny Gargano, Jimmy Jacobs and Gregory Irons were interesting people to talk to. Their stories of success and learning from their failures is admirable and inspiring.

One of the stumbling blocks for me as a rookie writer has been the fact that I am still an unknown. I have been turned down and ignored when I have asked for interviews. The wrestlers don’t know if I am a crazy fan who wants to get close to them. At times I have received assists from promoters, such a Brett from ESW, Troy from BCW and Kryss from CWF, who encouraged the talent to talk to me. Trent Barreta helped me out by reassuring one wrestler that I really was a writer and not some lunatic.

The wrestling journalism industry isn’t very big. Grizzled veterans of the business like Greg Oliver and Dan Murphy have encouraged me along the way. The other SLAM! Wrestling writers have sent me notes as well.

I have really enjoyed meeting the people involved in the sport of wrestling. From the ticket takers, to the guys who set up the ring, they are all fun to talk to and love the sport. I had a fun time sitting in on commentary for one organization, swapping zoo stories with Kevin Steen and getting the evil eye and eventual approval from Chavo Guerrero Jr.

The craft of writing is not easy. I have learned to hustle after that secondary quote or to search for that extra nugget of information that can make a story good. I have a long way to go, but as long as I’m having fun I plan on doing this for many years to come.