Whether it’s the sound of glass shattering or an ominous gong ringing, a pro wrestler’s entrance music can be just as crucial to his character as his moveset or his work on the mic. But which are the entrance themes that truly stand out? WWE attempts to answer this question as the new DVD Signature Sounds: The Music of WWE. 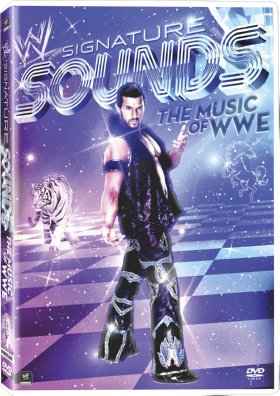 For someone like me who loves the special features of DVDs, this is a very appealing video. In it, the WWE ranks what it perceives to be the top 25 entrance themes of all time. While a good portion of those songs are no-brainers (The Rock, Stone Cold and The Undertaker) as far as legendary entrance themes, we also get some songs new fans might not know, like Mankind’s original theme “Ode to Freud” as well as newer songs including Fandango’s theme, which actually has a real name: The ChaChaLaLa.

Rather than simply have a countdown show and play the 25 songs, the WWE delves into each selected song and gives some interesting background information. For instance, it turns out that Marcos Curiel, the guitarist of POD (who plays Rey Mysterio’s theme) attended the same high school in San Diego as Rey himself. While it’s nothing mind-blowing, it’s nice to hear about why certain artists contributed to various Superstar themes.

Of course, the real meat of this DVD is the interviews with Jim Johnston, the man responsible for scoring pretty much everything music related for WWE including entrances, show themes and the vignette packages.

Johnston goes into detail over each piece of music including his reasons for deciding each signature sound. For instance, the aforementioned ChaChaLaLa score Johnston says that the part that everyone “Fandangos” to is actually just one part of the song. The base of the song is an actual ChaCha beat, but the brass instruments cover that up. It’s really interesting to hear that song broken down because without the brass notes, this would be a completely different entrance them, more classy and a lot less show-offy.

The only real downside of this DVD is the running time. Coming in at just around 70 minutes including the special features, I wish it was longer and go into more detail. However, you should be able to find it for under ten bucks. It’s a little bit of a coin toss on if you should or shouldn’t get this because if you are a hardcore wrestling fan, this is a no-brainer and a definite recommend. If you have just a mild interest in pro wrestling, this one probably isn’t for you.

Still, for those who are interested in learning more about the sounds of the WWE, this is an informative DVD. And while you may not agree with the placing of certain songs (I didn’t agree with their top spot) you do get to learn about the origins of some of the more famous themes in WWE history.

Matthew Asher is a freelance journalist currently living in Atlanta. He’s still waiting to meet Jim Johnston so he can get his own entrance theme music to play whenever he goes anywhere. What do you think would be the ideal music for Matthew’s theme? Email him your thoughts or suggestions, but reminds you to keep it clean.