NEW ORLEANS – The 2014 WWE Hall of Fame class may not be the most impressive in history, but the men and women inducted on Saturday at the Smoothie King Arena in New Orleans will go down on the most long winded.

The verbose class included a Diva that revolutionized the sport, a fan favorite veteran that conquered his personal demons to make it to the hall, a Hollywood star that legitimized Wrestlemania, a manager that was as popular as the stars he looked after, a Bad Guy who lasted after the bad times faded away, a Puerto Rican star who returned home to build his own successful promotion, and a Warrior that came back to the fold. 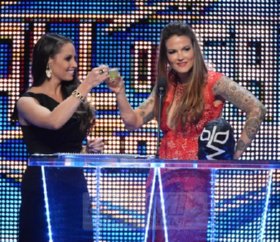 Trish Stratus and Lita share a moment during the WWE Hall of Fame ceremony. Photos by Mike Mastrandrea

The induction speeches hit every emotion, but all carried the same trait — they were long. Lita set the bar opening with a 45-minute tale of how she broke into the business and multiple (storyline) marriage proposals. She also gave thanks to the punk rock scene for showing her that she could be anything she wanted.

The Ultimate Warrior can be forgiven for running long as the headliner of the night. Warrior expectedly went a little nuts, but tried to inspire the crowd to go out do what needs to be done to succeed. Warrior also turned the spotlight on all the people in the back that make the show happen, requesting that a special award be created for all the guys backstage.

The tone of the night quickly became serious when Jake “The Snake” Roberts took the podium. Roberts professed his love for the business even though he never saw his father, Grizzly Smith, because of it. Instead of learning from the experience, he followed in his father’s footsteps, walking away from his family to be a wrestler. Roberts talked of uses drugs and alcohol to dull the pain, both physical and emotional. When he was at his worst, a single hand reached at, and that hand was Diamond Dallas Page. The fans got a huge thanks for raising money for Roberts’ recent surgery and showing him people still cared about him.

At the Academy Awards the orchestra starts playing when you go on to long. Tonight, Mr. T found out when you go to long at the WWE Hall of Fame induction, Kane walks out to cut you off. And all T wanted was to let everyone know he loved his mother.

Paul Bearer’s posthumous induction featured the biggest moment for the fans. After a few tales spun by his “son” Kane, William Moody’s sons accepted the induction. Then the lights went out, the bell tolled, and the crowd went crazy as The Undertaker walked out on stage, in the fog, to pay tribute to his late manager.

Time constraints cut down the time Carlos Colon had to address the crowd, most of which he did in Spanish. 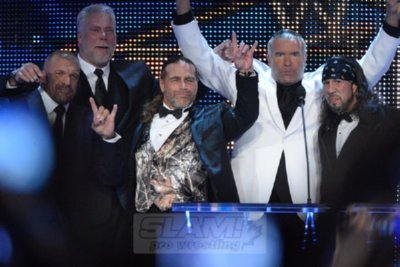 Scott Hall, aka Razor Ramon, kept his words short, but that still didn’t stop The Kliq from reuniting on stage.

And being the WWE, there was some nonsense to lighten the mood after Roberts’ speech, as host Jerry Lawler took a shot the royal jewels from El Torito.

There were many stories shared, many thanks given to various friends, family, and mentors of the stars inducted, but in the end every inductee thanked the fans for giving them a chance to be up on that stage. No one revealed a pregnancy this year, but Warrior surprised the crowd by announcing that he signed a deal with WWE.

If anything, the legacy that the Hall of Fame class of 2014 leaves will be shorter speeches.

Dale will take the night off to be a fan at Wrestlemania 30, but will return with coverage of Monday Night RAW. If he survives Bourbon Street that is.