Maybe one day, the current WWE will be referred to as the “good ol’ days.”

For now, I tend to see anything pre-2002 as the “good ol’ days.” I guess I’m stuck in the past when it comes to the WWE and what is enjoyable and what isn’t. 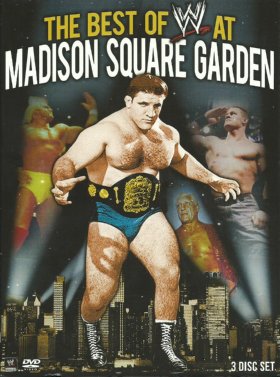 That said, when the WWE released The Best of WWE at Madison Square Garden three-disc set recently, I had to get it and because WWE DVDs are generally hit or miss with fans, I hoped this one would be a hit.

With more than 20 matches to watch from “The Garden,” this DVD set is a definite keeper. Watching any event at MSG always seems to have a certain feel or aura and, as the viewer, you expect big moments, big matches and above all else, excitement.

Granted, the vast majority of the matches here are available on numerous other WWE releases, but to have them all in one set is very convenient. Sure, you’ve got the Hulk Hogan versus Iron Sheik WWE title bout from Jan. 23, 1984 when Hogan won his first title and The Ultimate Warrior destroying The Honky Tonk Man for the Intercontinental belt at SummerSlam ’88, but there is also the much-talked about match WWE-NWA title unification match from 1980 between Bob Backlund and Harley Race.

This set is a trip down memory lane and to get to watch Bret Hart and Mr. Perfect from SummerSlam ’91 and Shawn Michaels versus Razor Ramon from WrestleMania X never gets old. Never. I mean, NEVER.

Throughout the DVD, current and past WWE stars talk about wrestling at MSG and these segments add a decent amount of flavor to the disc, even if The Miz is part of it. The part with Howard Finkel is a good bit and to watch old WWE matches, knowing he was the announcer made the event one to watch.

Just one Bruno Sammartino match? ONE?!? It’s a good one against Superstar Billy Graham, but come on. You induct the dude into the WWE Hall of Fame and the one wrestler that owned MSG back in the day gets ONE match on a DVD set? Seriously?

And you get five matches with Triple H? The dude’s good and all, but to give him more matches than Sammartino is simply a travesty. People that buy this DVD should buy it for the nostalgia, not for wrestlers still in their 40s.

Of course, John Cena’s surprise entry at the 2008 Royal Rumble is on here and I agree, this was a pretty big moment. The roar of the crowd when his music hit was a true MSG pop and it legitimately shocked everyone.

Like I said before, this DVD is all about nostalgia and I admit, that’s why I picked it up. I love all the old school wrestling when it was just that — wrestling. I don’t need backstage skits or any of that garbage. Just give me straight wrestling and I’m good to go. And for the most part, that’s what this DVD delivers.

I still can’t get over the obvious absence of Bruno matches, but hey, it is what it is, I suppose. When I think of MSG, I think of Bruno. The WWE apparently didn’t think the same — and that’s a crying shame. He’s front and center on the DVD cover, for Pete’s sake!

Overall, The Best of WWE at Madison Square Garden is worth whatever you pay for it. The matches that are included are top-notch and all have some sort of meaning or place in WWE history. However, the lack of Bruno drags down my rating, but only to a 7.5/10. More Bruno and less HHH would have bumped it to a 9.75/10.

In any event, just get this DVD set, OK? You won’t regret it.