A book of Mid-Atlantic wrestling memories

It’s not a stretch to say the book Mid-Atlantic Wrestling Memories has been 49 years in the making. 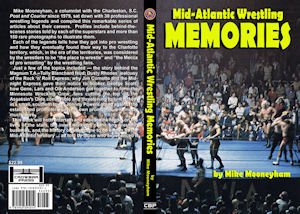 Author Mike Mooneyham attended his first live card in 1964 at County Hall in Charleston, S.C., and the sport has been in his blood ever since. His new volume, to be launched this week at the Mid-Atlantic Legends Fanfest in Charlotte, N.C., caps nearly half-a-century of research, writing, and fandom.

“The older I get, the more I want to remember important things in my life, and Mid-Atlantic Wrestling was certainly one of those things,” Mooneyham said. “I was hooked on it from the first time I turned on an old black-and-white television and heard [announcer] Bob Caudle’s voice and saw these larger-than-life figures in the ring.”

A long-time editor at The Post and Courier in Charleston, Mooneyham is known for his newspaper and online columns that humanize wrestling’s great characters, while still treating them with respect. (Full disclosure: Mooneyham collaborated with Greg Oliver and me on The Pro Wrestling Hall of Fame: Heroes & Icons.) Mid-Atlantic Wrestling Memories stays true to that paradigm, highlighting about 30 of the stars who will be in attendance at this year’s fanfest, from main eventers like The Midnight Express and Jim Cornette, to Johnny Powers and his lesser known, but fascinating, bid to establish an alternative organization to Jim Crockett Promotions.

“I had been writing a little bit about these guys coming to the show,” he said. “I definitely wanted to do something before that last event. So instead of going through all the previous fanfests, I thought I’d do a random sample of what fanfest was like and just do in-depth stories on how they came into the territory and their thoughts on Mid-Atlantic and Crockett Promotions.”

Mooneyham said he worked “pretty close to 24/7” to churn out the book, which is being published by Scott Teal’s Crowbar Press. But he thought it is a good fit for what is expected to be promoter Greg Price’s penultimate Mid-Atlantic fanfest.

“This has been such a wonderful event. Forget WrestleMania; this is my favorite wrestling event of the year. I look forward to it every August,” he said. “During my childhood, these guys were my heroes. As an adult, they were my friends, and at this stage of life, they’re legends.”

An encyclopedia of Mid-Atlantic grappling, Mooneyham goes so far back that General Homer O’Dell, the infamous manager of wrestling heels, was still billed as a colonel. For years, he searched for the newspaper clipping from that first live show in 1964 until, lo and behold, he found it in a batch of material that retired South Carolina promoter Henry Marcus gave him 30 years later.

For the record, Haystacks Calhoun and Johnny Weaver were in the main event that night against the Bolos, one of whom — Joe Hamilton — is featured in Mid-Atlantic Wrestling Memories. So too is Powers, and Mooneyham didn’t know until he talked to him that the Canadian-born star owned an arcade in Folly Beach, S.C., the columnist frequented as a teenager. “It was like a hangout and he actually owned that,” Mooneyham said. “Even though the arrangement with the arcade didn’t work out, the fact that he owned that big, historic piece of property was certainly news to me.”

With about 150 photos, Mid-Atlantic Wrestling Memories has a cover price of $22.95 and will be available to the general public. “There are so many little stories like Angelo Mosca, and how he didn’t like the business when he first got into it, but learned to love it. Stories about guys like Barry Windham burning up Ric Flair’s limo — just little funny asides that kind of reflect the personality of Mid-Atlantic Wrestling. It was just a wonderful, colorful territory,” Mooneyham said.

Mooneyham also expects to participate in a Aug. 1 panel featuring Magnum T.A. and Tully Blanchard as they revisit their famous 1985 “I Quit” match, which set a standard for gutty, hardcore wrestling before it was fashionable.

STEVEN JOHNSON is co-author of The Pro Wrestling Hall of Fame series with Greg Oliver and is a reporter and editor in Virginia. He can be reached at [email protected] and will be covering the Charlotte fanfest for SLAM! Wrestling.