Chuck Conley, 75, was a Scufflin’ Hillbilly

Over the last years of his life, in nursing homes and a hospice, Chuck Conley had three artifacts of his past prominently displayed. There was a photo of him as a wrestling champion in the U.S. Marines, another dressed up with partner Rip Collins as the Scufflin’ Hillbillies, and a plaque from when he was inducted into the CPW Hall of Fame for his fame in the Tri-States area of southern Ohio, southern Virginia and eastern Kentucky. 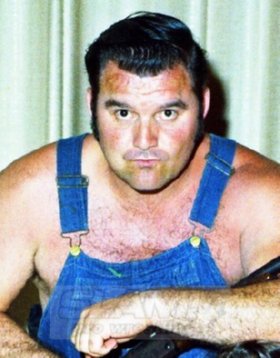 That life may have ended at age 75 on Friday, July 26, 2013, of natural causes in Ashland, Kentucky, but, as they say, the legacy carries on.

Born on April 17, 1938, Conley got into pro wrestling through his time in the Marines, as he was stationed in North Carolina and came to the attention of Charlotte promoter Jim Crockett Sr.

“The Hillbillies use a style similar to French Savate (kicking with bare feel). Used by many European wrestlers, this style is a very effective defense,” reads a story from June 1961 in the Kokomo (Ind.) Tribune. “Claimants of the West Virginia, Kentucky and Tennessee ‘scuffling’ championship, the Hillbillies say that ‘scuffling’ is greatly superior to wrestling — and more exciting.”

Heading to the ring with shotguns, cowbells, coveralls and their cousin Alfred, the team was a success for a number of years.

“The Hillies picked up their nickname from a Kentucky folkgame called ‘scufflin for pigs,'” reported the Kingsport Times News in December 1962. “The game involved some ten to 15 men on their hands and knees in a ten to 15 foot circle with the object being to knock everybody but yourself out of the ring. Collins and Conley were virtually unbeatable at the game and apply some of the tactics to wrestling.”

Their finishing moves were called the Possum Stump and the Stump Puller.

Included in their run was New York’s famed Madison Square Garden, which began in August 1962, facing top teams like the Fabulous Kangaroos, the Tolos brothers, and Johnny Barend and Magnificent Maurice.

“I thought they were the greatest,” said 1wrestling.com’s Bill Apter, who saw them as a youngster in New York City.

There were other versions of the team over the years, but the Collins/Conley pairing was the most famous.

According to historian Michael Norris, “they mixed and matched teaming with Billy Garrett and Slim Marlin from time to time and Conley teamed with Vic Nichols as the last version of the Hillbillies in the early ’70s.

When his run in the Scufflin’ Hillbillies ended, Conley settled in Ashland, Kentucky, where he was a baseball coach in town, and drove a city bus. Around 1978, he was injured in a crash, and stopped wrestling. Instead, he worked with a local wrestling promotion until around 1984.

Rip Collins, who died of natural causes on June 18, 1993, was involved in the local promotions as well.

Wrestling veteran Bobby Blaze first met Conley in 1976, when Bobby was 12 years old and the Scufflin’ Hillbillies were heroic figures. Later, he saw the respect that Conley got.

“The one thing that stands out in my mind is, whenever he came out to Smokey Mountain shows, we always let him in free — I wasn’t sure if [promoter Jim] Cornette would want that or not, but him, Ricky and Robert, Sandy Scott, they all knew him and remembered him,” said Blaze, who worked those SMW shows. “He’d probably come to three shows a year, around this area, an hour’s driving distance, in the mid-’90s … he was treated with really good respect. He knew Ricky’s dad real good.”

Through the years, Blaze kept in touch with Conley, and said that he was decidedly not a braggart despite the fame.

After Conley was placed in nursing home, Blaze would visit occasionally — bringing his friend chewing tobacco and Pepsi.

Conley was predeceased by three sons, said Blaze. One died in the late 1970s, another in the early 2000s. A third son died at age 45 a few months back. “When I went to see him a few days later, it was almost like he’d given up. I could tell,” said Blaze.