Último Dragón has been away from North American audiences since 2004, when he left WWE. The innovative Japanese superstar has kept active, wrestling in Japan, Mexico and Europe, but has specifically kept away from these shores. 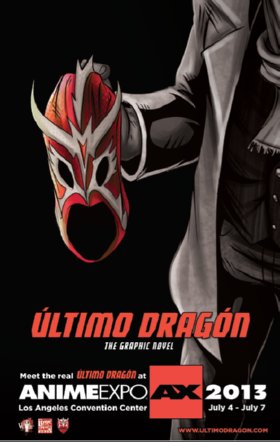 The announcement of Último Dragón: The Graphic Novel, officially debuting at the Anime Expo, taking place July 4-7, 2013 at the Los Angeles Convention Center, is just the start of his return said the writer behind the project.

“The graphic novel is literally just the tip of the iceberg of what we want to do,” said Dan Madigan, the ex-WWE writer, who has penned the five-part graphic novel. “It’s the first thing we’re coming out with. The Kickstarter model will hopefully work for us.”

Details on the Kicktstarter crowdsourcing initiative will be revealed at the Expo.

The Japanese-born Último Dragón began his career over 25 years ago under his birth name, Yoshihiro Asai. He was trained by some of the most famous names in the history of the sport — Antonio Inoki, Yoshiaki Fujimara and El Gran Hamada — and has worked for virtually every major wrestling company, including AAA, CMLL, WAR, IGF, WCW, and WWE.

Madigan, who wrote the WWE movie See No Evil, has teamed with Último Dragón Worldwide LLC, and Musetap Art Studios for the graphic novel. The book is illustrated by Wil Woods and colourist Tyrine Carver.

Seredipity has been on his side throughout, said Madigan, who only briefly got to meet Último Dragón when they were both employed by WWE. Madigan tried to convince the powers that be to re-sign Dragón and build an entertaining cruiserweight division around him and other lucha libre and Japanese stars.”Everything that’s happened to this point has been a fluke,” he said, “like a house of cards falling in the right direction.”

It started when the Los Angeles Times wanted to do a story on lucha libre and contacted Madigan, who wrote the English-language Bible on its history, Mondo Lucha A Go-Go. The story grew into a front-page feature story and drew the attention of Último Dragón’s manager, Gary Lee Jackson. Madigan and Jackson met up and got along famously, drawing up a partnership agreement within days. 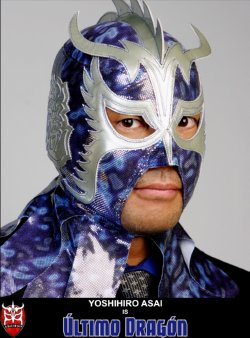 Together they have been pitching various projects over the past couple of years, getting hopes up, only to see them dashed by funding issues.

But the Los Angeles moviemaking connections did score them some great help for the Kickstarter trailer, which will be released in the coming weeks.

The genesis of the graphic novel was pretty obvious, given Hollywood’s penchant these days for making comics into movies, from superheroes to The Walking Dead or Scott Pilgrim.

“Graphic novels about wrestling tend to be rather boring. That is why we are doing something different. We have decided to create a story NOT about wrestling nor a wrestler, but about something that I feel is worthy of a story in its own right,” said Madigan, expanding on the thought. “We wanted to do a graphic novel about wrestling with no wrestling in it. We wanted to grab the excitement of what could happen with these characters without putting it in a wrestling ring in an arena.”

The focus of Último Dragón: The Graphic Novel is the mask.

To use a superhero comparison, it’s like Green Lantern’s ring, which gets used by different people throughout the galaxy and over eons of time.

The story arc takes the mask from feudal Japan to pre-revolutionary Mexico, into post-World War II New Orleans, London of the Swinging ’60s, and finally into a post-apocalyptic world, which Madigan likened to “Snake Plissken becoming an Ultimo Dragon character.”

Having Wil Woods on board is another happy accident, said Madigan. Woods initially thought it was a friend playing a rib on him when he was approached about the graphic novel. It turns out that Woods had been a pro wrestler himself in southern Illinois, working as Kid Sinister, and helping to train Chuck Taylor and Ricochet. After catching Último Dragón against Chris Jericho from Japan, he became a Dragón fan for life — to the point he dropped a couple of projects to focus on Último Dragón: The Graphic Novel. 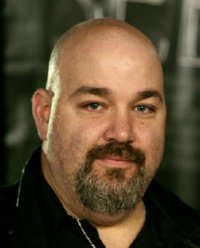 “It just seemed like the perfect marriage for me, because I’ve been doing comic books for 20 years and in my former life, I was a wrestler. It’s been coming back full circle,” said Woods.

Like Madigan, he wasn’t especially thrilled with previous attempts to marry pro wrestling to comics, and loved the writer’s take on things.

“When Dan told me what he was wanting to do, my mind was blown. I didn’t expect that,” said Woods. “I expected to be putting something to do with wrestling on a page, I figured I’d be doing actual matches and moonsaults. When Dan told me the story, I just couldn’t believe it. It’s so epic in scope that I was just blown away.”As for Último Dragón, he has been kept abreast of the projects.

“The good thing is he had complete faith in my ability,” said Madigan. “He saw my passion, he knew what I could do. He said, ‘Go with it. I trust you enough.’ His blessing was worth more than anything.”

Woods will finally get to meet his idol at the Anime Expo in Los Angeles. He believes that the project will get the necessary funding from Kickstarter.

“I don’t have any doubts that it’s going to succeed,” said Woods. “Take Último’s fanbase out of it, and you still have a book that appeals to what’s hot now — Japanese culture, manga, anime — and the first book is heavily influenced by that culture.”