Feuds are the fuel driving the pro wrestling business. They are what sparks interest in ticket buying, television viewing and pay-per-view watching. The best feuds, the classic feuds, are not measured by how much blood was spilled, how many titles changed hands or how many cards they headlined. The true measure is what lasting effect they had on the pro wrestling business and whether they lived on in the minds of fans.

The Top 25 Rivalries in Wrestling History exemplifies what is right and wrong about the WWE’s latest obsession with countdown themed DVDs. Like the others in the catalogue, its integrity is tarnished by company politics — in this case sucking up to the McMahon family, in particular Triple H — and inexplicably omitting entries that are unmistakeably obvious to anyone who has followed the industry for decent period of time. 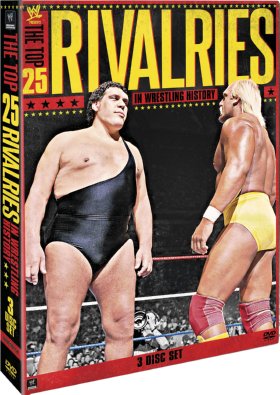 You cannot have a legitimate discussion about the greatest sports rivalries without mentioning The Celtics versus the Lakers, Muhammad Ali versus Joe Frazier, A.J. Foyt versus Mario Andretti or The Yankees versus The Red Sox. You also cannot slap together a pro-wrestling “Rivalries” DVD without mentioning such iconic feuds as the New World Order versus WCW, Bobby Heenan versus Hulk Hogan, Ric Flair versus Sting, Roddy Piper versus Jimmy Snuka or Terry Funk versus Mick Foley. Although our host Renee Young tries to mitigate these gross oversights by categorizing the picks and their placement as “extremely subjective,” it is impossible to take the list to heart when those feuds are left off while The Undertaker versus Kane, Randy Orton versus Triple H or CM Punk versus John Cena are included. It is not that those storied conflicts didn’t capture the imaginations of fans or weren’t well done. They did and were. It is just they are not and shouldn’t be considered absolute classics when your list has only 25 slots available.

This is not to say the list doesn’t have its merits. The producers did manage to include Ricky Steamboat versus Ric Flair, Verne Gagne versus Nick Bockwinkel, and Bruiser Brody versus Abdullah The Butcher, which goes a long way to educating newbies who might invest the time and energy in reading or watching more and rattling the memories of squared circle veterans, who might dust off their book and media collections.

Putting the validity of the list aside, the production itself is a mixed bag of thumbtacks. The rivalries are chronicled in their own segments but the details and background of them is not always explained. In the place of that, we are sometimes treated to booking breakdowns of why the opponents worked so well together on paper and inside the ring. While that information puts things in perspective, without the background providing context we have no idea why the foes came into conflict and why the feud escalated to such timeless proportions. We are only getting half a history lesson and that isn’t very helpful.

The producers have made clever choices in who hosts each segment though. Having Vickie Guerrero talk about Eddie Guerrero versus Rey Mysterio, Shane Douglas detail Tazz versus Sabu, Mick Foley gives his take on Brody versus The Butcher or Mean Gene outline Gagne versus Bockwinkel, conveys the feeling of true insiders sharing their memories and thoughts, which is great for fans. Of them all, the Okerlund commentary stands out the most but for all the wrong reasons. Whereas the other hosts focus on the positive nature of the confrontations, “Mean Gene” takes a few moments to bash Jesse Ventura’s in-ring skills and Verne Gagne for being unable to cut a promo, ruling the AWA with an iron fist. The off the cuff comments are very jarring just because all of the other hosts are celebrating the subject matter at hand and refraining from any negativity.

The silly science themed segments hosted by Renee Young which stitch the countdown together lose their charm almost instantly. Comparing wrestlers to elements on the periodic table is just silly. Like I did, you will find yourself fast-forwarding Renee whenever she pops up, which is a shame because she does have a captivating personality.

Fans should also be aware the list only takes up one of the three disks in the set. The other two disks contain a total of 13 matches highlighting the various feuds like Tazz versus Sabu at Barely Legal 1997 or Undertaker versus Mankind at the 1996 King of the Ring. None of these matches are hidden gems or hard to find. In fact, as a fan you may have many of them already.

For The Top 25 Rivalries in Wrestling History DVD, the WWE hasn’t done its homework and it shows. The glaring omissions cannot be ignored by anyone who knows their wrestling history. How can fans take seriously any list that omits feuds which propelled entire companies for years like New World Order versus WCW, Bobby Heenan versus Hulk Hogan or Hogan versus Flair? If there are more countdown sets in future, the WWE should stop worrying about stroking company egos and concern themselves with portraying wrestling history both fairly and accurately.

Below are just SOME of the missing matches which should have been on the list.