The thing to remember when reading My Favorite Match, the WWE Books release from last year, is that everyone in it appears to be limited to choices from their WWE careers, with three notable exceptions. 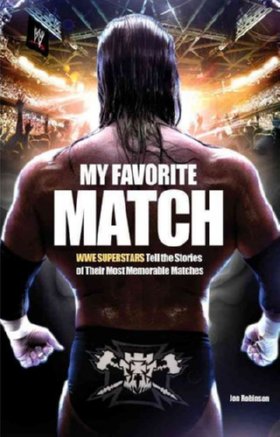 The best example of this narrow-minded approach is Dusty Rhodes. Forget the NWA World title wins, the spectacular events he headlined around the United States; he chooses a bout with Superstar Graham from Madison Square Garden as his favorite match.

Roddy Piper doesn’t select the career-defining dog collar match against Greg Valentine from the first Starrcade or any of his bouts with Hulk Hogan in WWE or WCW, but instead his bout with Adrian Adonis from WrestleMania III.

It’s a WWE bias, which is pretty well a given with the publisher, and I understand. Author Jon Robinson, who covers video games for ESPN.com, was tasked with collecting the stories, and keeps everything in first-person, which is cool. (Not so cool is the swearing, which was a surprise for a WWE book, so parents be warned.)

But for R-Truth to talk about how he “finally made it” when he challenged John Cena for the WWE title is a shot at the NWA/TNA, where he reigned as World champion. Christian isn’t quite as direct, but being the focal point and champion for TNA doesn’t register, and his write-up is more about his friendship with Edge than beating Alberto del Rio for the World title.

Similarly, I’ve seen William Regal rave about his bout with Chris Benoit from the 2000 Brian Pillman memorial card. For obvious reasons, that couldn’t have been his choice. Instead, he talks about Backlash 2001 and his fight with Chris Jericho.

For many guys, their WWE runs are the highlight of their career. In a couple of cases, it doesn’t appear that they will ever reach that pinnacle again — Alex Riley, for example, and his bout with The Miz.And did you notice that I wrote “guys” in the above line? No Divas get to tell their stories about their favorite matches. Then again, in WWE-land, the Divas are limited on TV to quick, four-minute bouts, where the introductions take longer than the action.

All this said, I do have to say that I enjoyed My Favorite Match. It’s a quick read, and there were some unique, behind-the-scenes stories, like The Miz talking about the texts he got from The Rock and Chris Jericho during his main event run, or Dolph Ziggler addressing backstage politics. The few errors I can overlook with a laugh. My favorite was Sgt. Slaughter’s claim: “I’ve wrestled over twelve thousand matches in my career.” Simple math would mean that he would have had to have wrestled 365 days a year for 32 years for that declaration to be true. His discussion of leaving the WWF and opting for Hasboro toys and his G.I. Joe figure is the ultimate in revisionist history — apparently he and Vince McMahon never had a falling out.

There are moments we see behind the curtain, but then again, at no point is the booking or the specifics of being told to win or lose discussed. But we do get a little insight into a couple of the backstage agents and their roles in making storylines happen, as Cody Rhodes addresses, with Michael Hayes and Arn Anderson disagreeing on the direction of an angle.

A couple of the wrestlers, Regal and John Morrison, take it less than seriously, which actually plays to my impressions of the stories I’ve heard through the years — while the fans remember the bouts themselves, the wrestlers usually remember the MOMENTS, the things that happen around a match, away from the arena, or on a road trip.

Given that moments often mean more to a wrestler, the three “outside the WWE” selections need discussion.Technically, Jerry “The King” Lawler talks about his infamous match with Andy Kaufman in 1982 in Memphis, but it’s really about their appearance on Letterman that drew everyone’s attention to their feud. It was pretty cool, but nothing really different than what is in The King’s autobiography.

Rey Mysterio brings up his bout with Eddie Guerrero from WCW Halloween Havoc in 1997. While it could have been a maudlin entry about a lost colleague, instead it’s a great recollection of a super match. We learn as much about the issues they faced backstage in the dysfunctional world of WCW as we do about what went on in the ring.

My favorite entry in My Favorite Match is from Alberto del Rio and closes the book. He describes his October 2000 debut in Japan, teaming with his father, Dos Caras, for a tag team bout. It’s honest and loving, and is the kind of thing that would go a long way towards getting del Rio over further as a babyface.