AJ Styles and Christopher Daniels have wrestled each other for more than a decade, with Styles estimating the two have met on more than 100 occasions inside the squared circle.

Now, Sunday at TNA Final Resolution (8 p.m. ET, PPV), the two will meet in what’s being billed as “One Final Time” between the two long-time friends turned bitter enemies. 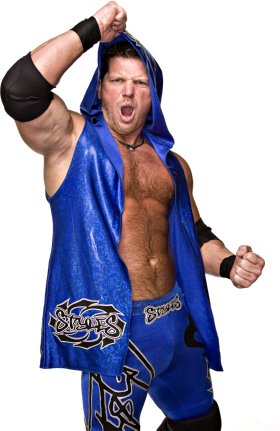 “The thing about Chris and I is we’ve had so many matches and I think they’ve all been pretty good, so the bar’s been raised every time,” Styles said this week on a TNA conference call. “The last time was a Last Man Standing match where we nearly killed each other. It was such a brutal match for both of us. … It’s so hard to top something like that because we literally left everything we had in the ring and outside it. There was nothing left. So to have one final match, it is a lot of pressure because we’ve got to make something that people will remember and never forget and I think we’ll be able to do it.”

When thinking about that pressure, Styles wants to change it up a little. And for he and Daniels to have the best match Sunday, they are going to have to out-duel the World Heavyweight Championship match between Jeff Hardy and Bobby Roode and a grudge match between Bully Ray and Austin Aries.

“I think the thing I’m going to try to accomplish in this match is try to make it different than everyone else’s on the card,” Styles said. “And you’ll see something people haven’t seen or maybe they’ve forgotten about: Classic wrestling and classic storytelling.”

Styles has been involved in a blood feud with Daniels and his partner-in-crime Kazarian for the better part of a year now. The Last Man Standing Match at Destination X was one of the best TNA matches of the year, but if Sunday is indeed the final time (Styles himself is skeptical of how it can be, especially if both are in the Bound For Glory Series next year, he added), the two have made many, many memories together. 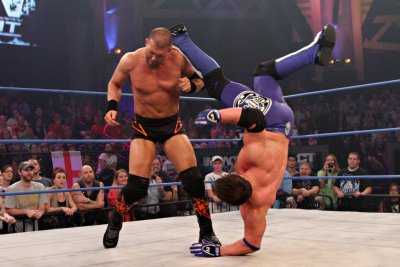 A.J. Styles clocks Kazarian in the back of the head.

“I definitely have a lot of memories with him,” Styles said. “When we won the tag titles, that was an awesome moment there. Him coming out when I won the world title (in 2009), lifting me on his shoulders, that was a pretty memorable moment. But we’ve had some classic matches that are hard to forget, whether it’s in TNA or outside of TNA. We’ve wrestled each other 100 times at the very least. If I had to pick just one, which is so hard to do, I think that Last Man Standing match is probably the most brutal we’ve ever had and I don’t think we’ll have one like that ever again.”

So what’s next for Styles after this final encounter with “The Fallen Angel?” He’s not sure of who he might battle with next, but he’s certain he’s done forging friendships inside the ring. He is, in his own words, done being the janitor.

“I think I’ve done enough of those little friendships and factions and stuff like that,” Styles said. “So I think it’s about time for AJ Styles to do his own thing and stop worrying about everyone else and stop being the janitor of TNA and cleaning up messes and going out there and doing my own thing.”

But for one last time Sunday, Styles with step into the ring with Christopher Daniels in a match both men have high expectations for. But when all is said and done, Styles is acutely aware of how the two will always be linked as each other’s iconic opponent.

“I don’t see how it can’t be,” Styles said. “We always bring out the best in each other and always have so many great matches. I can’t see it being anyone else. I think Chris is definitely my rivalry when it comes to professional wrestling.”