WWE may have its Divas and TNA may have its Knockouts, but companies like SHIMMER and the newly formed SHINE have what the others are often missing: actual women’s wrestling. And on July 20th, rather than stay in the background as valets or managers, the women of SHINE will showcase their talents at the company’s inaugural iPPV, aptly named “SHINE 1”.

As the sister company of the well-established SHIMMER, SHINE is in good hands from a managerial standpoint. Promoted by Sal Hamaoui with Lexie Fyfe and Daffney as bookers, SHINE will feature some of the top Indy wrestlers as well as promising young rookies.

Because of the relationship of the two companies, don’t be surprised if you see wrestlers from each company competing against each other. 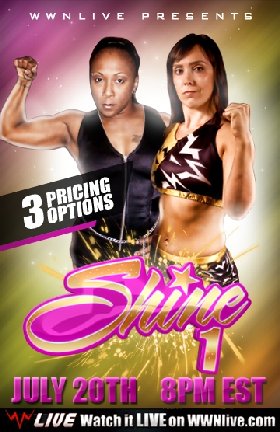 “We won’t use all the wrestlers on the same rosters, but we’re working together,” Fyfe told SLAM! Wrestling. “You may see a SHIMMER match on a SHINE show or vice versa.”

For some of the more seasoned wrestlers, including Allysin Kay, Tracy Taylor, Jayme Jameson, and Jazz, this will be their first time competing for either SHINE or SHIMMER.

Fans who have been keeping up with SHIMMER will be glad to know SHINE won’t have any contradictory storylines should any SHIMMER wrestlers show up for matches.

One of the benefits of being a startup wrestling company is the opportunities available for the lesser known wrestlers. According to Fyfe, while veterans are important, SHINE won’t simply be relying on big names and hope for success. Fyfe would rather give the opportunity to those who have a great attitude toward the business and a desire to put on a great performance.

“It doesn’t matter if they are rookies,” said Fyfe. “If they can bring something to the shows, we’ll give them the chance to help build this product from the ground up.”

For those who still want to see established veterans compete, SHINE has you covered. SHINE 1’s main event, dubbed the “First Time Ever Dream Match” features Sara Del Rey, who just inked a WWE deal, facing off against Jazz.

In addition to all the known veterans, Lexie wants fans to pay attention to two rookie-heavy matches. “I think Veda Scott is really starting to come into her own as a wrestler,” Fyfe praised. Her match against Kimberly “is basically rookie vs. rookie so we’ll see who comes out on top there.”

The other newcomer Lexie says to look out for is Santana Garrett who will be taking on Tina San Antonio.

“Santana Garrett has something to prove after the drubbing she received from Sara Del Rey at the SHINE preview match on the EVOLVE show recently,” Fyfe said. “I think she’s one to watch. It will be exciting to watch her grow and improve in ring.”

The lifeblood of SHIMMER has been its DVD sales. SHINE hopes to duplicate SHIMMER’s success, but plans to use a different method. SHIMMER records four DVDs worth of material in one weekend twice a year for a total of eight yearly DVDs. SHINE aims to have 12 DVDs a year but each one shot at a different time.

“We’ll be doing monthly shows,” Fyfe said. “So every month we’ll have a new DVD.” This means the “SHINE 1” DVD will include every match on the card and should be available a few weeks after the initial showing.

By having the monthly iPPV’s SHINE believes this will provide a greater variety of wrestlers to the shows.

“Lots of wrestlers who haven’t been on SHIMMER will be able to compete on SHINE,” Fyfe predicted. “Rather than shoot four episodes in a weekend, we’ll have people come every month.”

“SHINE 1” will have seven singles matches and one tag match. Just don’t expect to see any belts up for grabs just yet. “Just like SHIMMER we’re going to have a few pay-per-views before introducing titles,” Fyfe said. “We want to get some of the newer wrestlers known as well as the product before the titles. That’ll make the titles that much more special.” According to Fyfe, SHINE will have both singles and tag team champs crowned after a few shows.