WCW Clash of the Champions release spoiled by missing Ventura

There will be quibbles from fans about the match selection on the new WWE DVD/Blu-Ray release, The Best of WCW Clash of the Champions. Some of the most important matches in WCW history are there, including the star-making Sting versus Ric Flair match that kicked off the Clash events in 1988. But if commentary matters to you, then this three-disc set will disappoint. 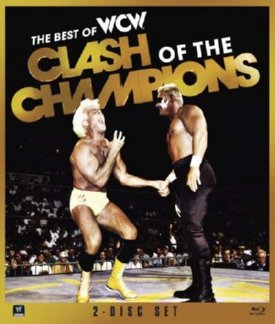 The Best of WCW Clash of the Champions includes some brilliant Ric Flair matches against Sting, Terry Funk, and Lex Luger. Steve Austin is also very prominent as he’s featured as a member of the Hollywood Blondes along with Brian Pillman against Ric Flair and Arn Anderson, and in matches against Brian Pillman and Ricky Steamboat. Watching these matches you can really see the talent that Austin possessed at this early stage of his career and why he ultimately became the huge star he did later on in WWE.

Also included are some wonderful matches involving Rick Rude. If you’ve only ever seen Rick Rude’s matches when he was part of the WWE in the 1980s, the bouts included here really show Rude at his best. That encompasses a scintillating match between Rick Rude and Sting, and a tag team affair involving Sting and Flair versus Rude and Vader.

Perhaps surprising is the fact that Hulk Hogan, despite his lengthy tenure in WCW, only appears in one match in the entire collection, which is a tag match with Macho Man Randy Savage versus Flair and The Giant (Big Show). What is present though are two great cruiserweight matches involving Ultimo Dragon against Dean Malenko, and Chris Jericho versus Eddie Guerrero. Eddie Guerrero is also featured in another match against Diamond Dallas Page.

Sadly in the last match included, which is a tag match between Diamond Dallas Page and Lex Luger versus Scott Hall and Macho Man Randy Savage, the voice and image of Michael Buffer is edited out and overdubbed with a reverberating echoing voice. This is likely due to a legal issue with using Michael Buffer’s voice and image on DVDs and Blu-Ray.

Unfortunately for The Best of WCW Clash of the Champions, the WWE has returned to blocking his color commentary completely on several of the matches found in this collection and have even edited the play-by-play commentary so as to not even refer to Ventura. Thus, you have lengthy stretches where all you hear is the yelling of the crowd. If the desire was so strong to not include the Ventura color commentary, the WWE could have recorded new commentary with some of their current on-air commentators instead of leaving the viewer with the long stretches of dead silence.

Since the WWE decided not to include any vignettes or promos that led up to the various matches, and the editing out of Ventura’s commentary, the viewer is left with little in many cases with with no information on the back story for several of the matches. It’s a real shame because it detracts from some great matches.

The Blu-Ray version comes with three extra matches including Flair and Barry Windham versus the Midnight Express, Sting and Steamboat versus Rude and Austin, and Dustin Rhodes and Sting versus Vader, Paul Orndorff and Windham. It should be noted that the DVD version comes with no extra matches at all. This is may be due to the WWE wanting to encourage people to buy only the more expensive Blu-Ray version.

If there is one impression left by The Best of WCW Clash of the Champions it is how much talent the promotion featured and it honestly leaves one wishing they were still around. WCW at its best were fully able to compete with anything the WWE were capable of producing and this collection of matches certainly demonstrates that. Regrettably, the editing out of Jesse Ventura, and Michael Buffer to a lesser degree, severely detracts from the enjoyment of watching several of the better matches and leaves question marks as to why the WWE made such a decision.

So, depending on how much commentary matters to you, I can only offer a lukewarm two count for The Best of WCW Clash of the Champions DVD/Blu-Ray.