BUFFALO, NY — House shows like Sunday afternoon’s Raw roster edition in Buffalo are geared specifically to treat the fans, and are a little bit like the old MTV Unplugged concerts: relaxed, informal, and usually a bit more fun — for both the fans and the wrestlers. If you like contests of strength and spitting, this is the show for you.

The arena certainly features a stripped-down set compared to a TV or PPV broadcast. Gone are the pyro and the grand entrance ramp, although at least there’s an effort to give the show some audio/visual life.

Most noticeably missing at this time of year is the WrestleMania sign. To what shall the wrestlers point? To Gilbert Perreault’s retired number?

Missing, also, is Vickie Guerrero, despite both Jack Swagger and Dolph Ziggler being in action, though that probably doesn’t break the hearts of too many fans.

All seating sections of the First Niagara Centre are open and, since there is no need to fill the seats for the main camera angle, the crowd is spread more evenly throughout the three-quarters’ full arena. 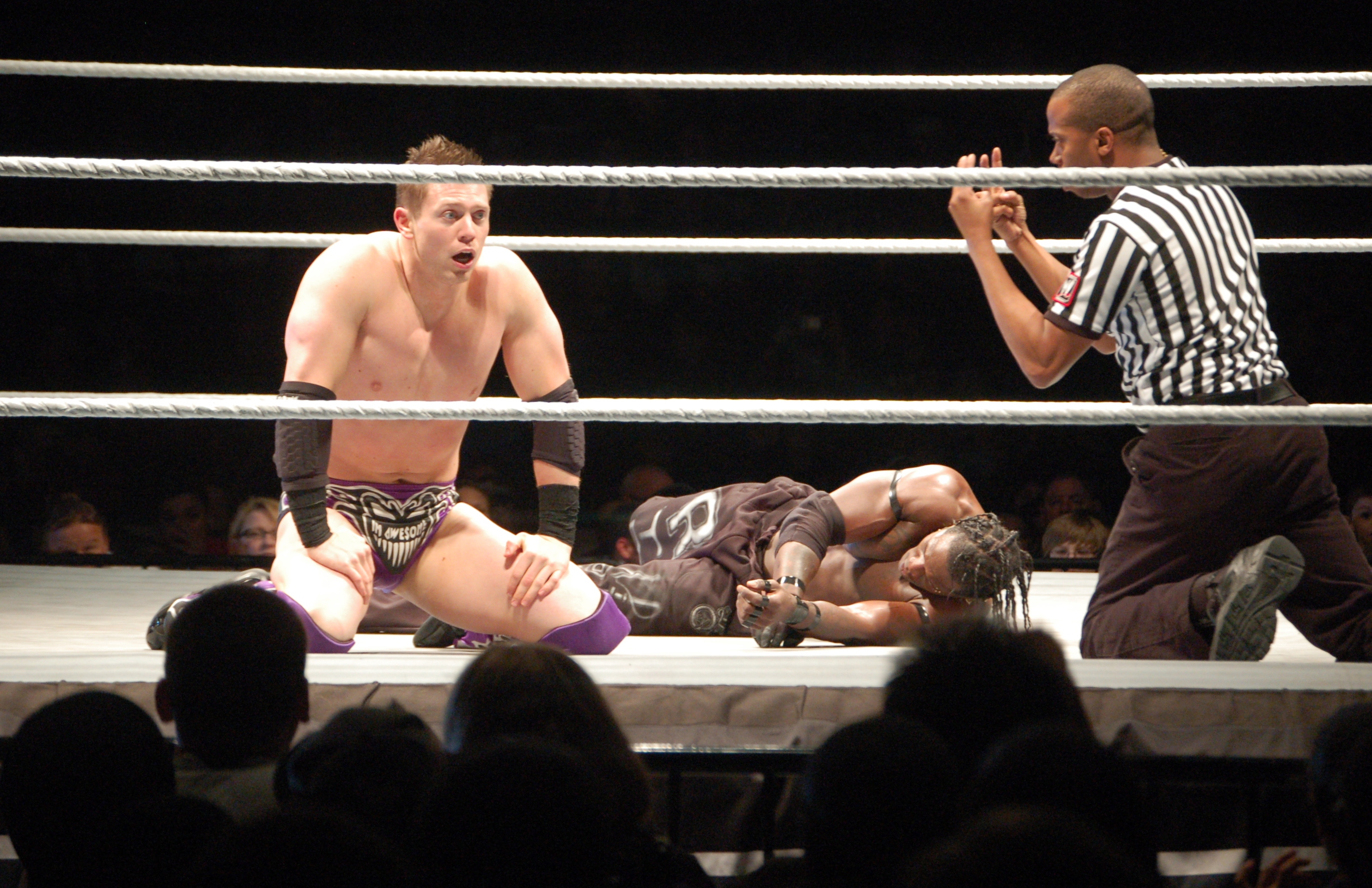 The Miz can’t believe he only got a two-count. Photo: Patty Hillhouse

Most fans leave their signs at home tonight, so instead of a “best sign” award, the “best heckle” goes to a kid for digging into his Dora the Explorer knowledge and yelling “Swagger no swagging”. Don’t know what it means, but it’s funny.

The crowd is pretty predictable in its likes and dislikes, with Chris Jericho and The Miz taking the easy route by slagging Buffalo for its sports teams and penchant for wings, and getting the hot sauce from the fans in response. The greeting for Eve was more favourable than the writers would probably have liked, but at least a couple of eight-year-olds led the charge in labelling her a “hoeski”.

Jericho is particularly offended by the USA chant that erupts during his speech, though that doesn’t stop him from crying out “USA, help me!” as he suffers inside a Kofi Kingston headlock.

Kingston, by the way, is wearing “Air Boom” kneepads. Is he carrying a torch for his soon-to-be returning partner, Evan Bourne, is he too cheap or lazy to update his apparel?

Besides outdated protective knee-wear, everything else about the night points towards the wrestlers giving their all for the fans. Without the predictable patterns forced onto matches to satisfy commercial breaks, yet also without the high drama of a match that will have a long-lasting effect on storylines, the wrestlers go into their bags of old tricks.

The heels jaw at the crowd, telling them to shut up when they’re really not making much noise; CM Punk hears a fan call out a request to give Dolph Ziggler a wedgie and he happily complies; the same fan later passes his sunglasses to Punk, who dons them to deliver a running knee-lift — but that one didn’t work out as Ziggler gets his feet up to drop the champ, allowing the ref a moment to return the sunglasses. 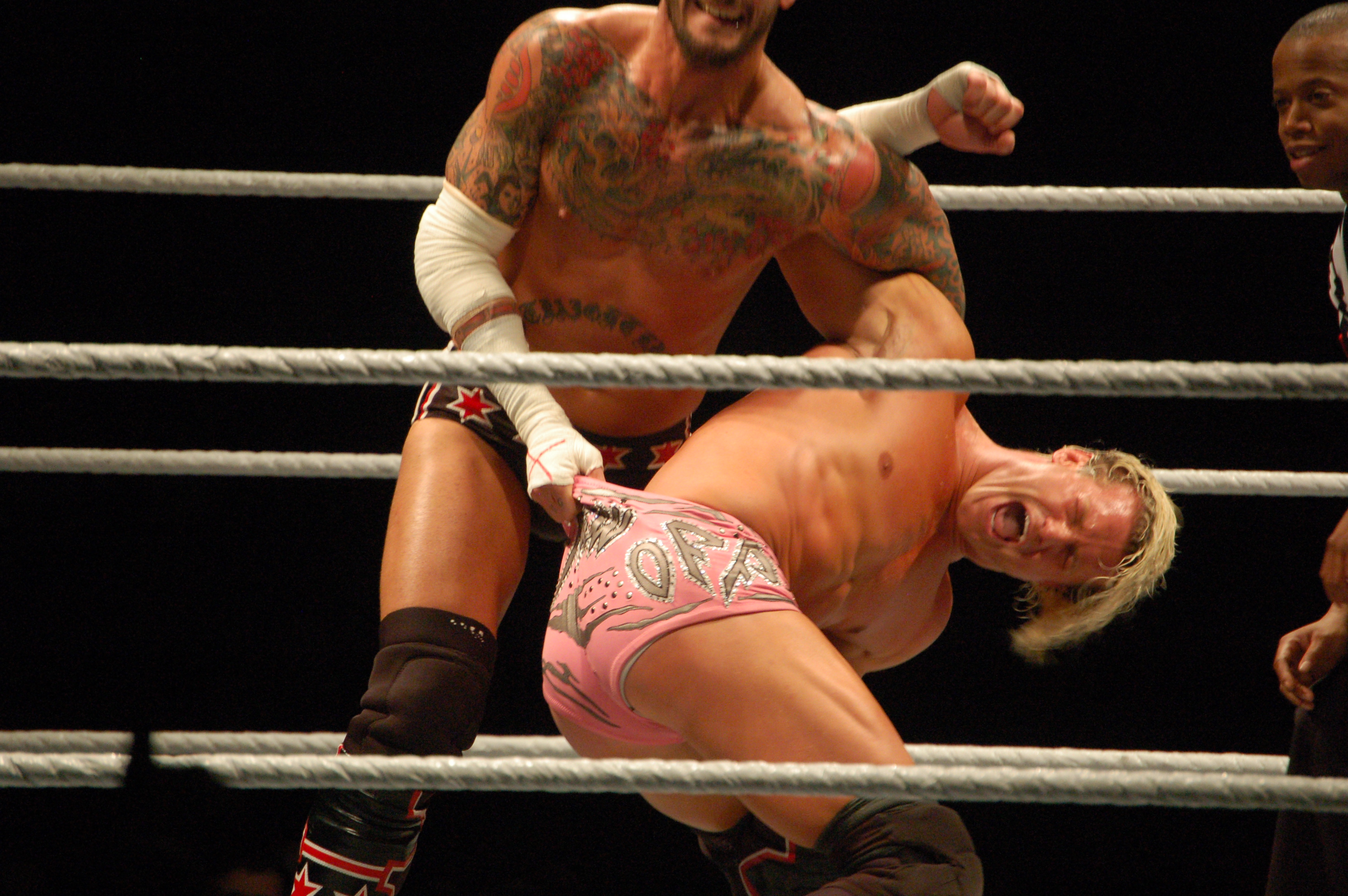 Everyone loves a good wedgie – except for Ziggler. Photo: Patty Hillhouse

There’s also some superficial evidence that some of the wrestlers were having a contest amongst themselves as to who could launch the biggest loogie when taking a shot to the head. R-Truth led the charge early on with several spotty efforts, only to be topped by The Miz, and later Chris Jericho, both with singularly impressive distance on their expectoration.

They all must bow down, though, to Dolph Ziggler, who used an uppercut by CM Punk to unleash a moon-shot that landed 15 feet away from the ring — and in the aisle to the great fortune of the fans. 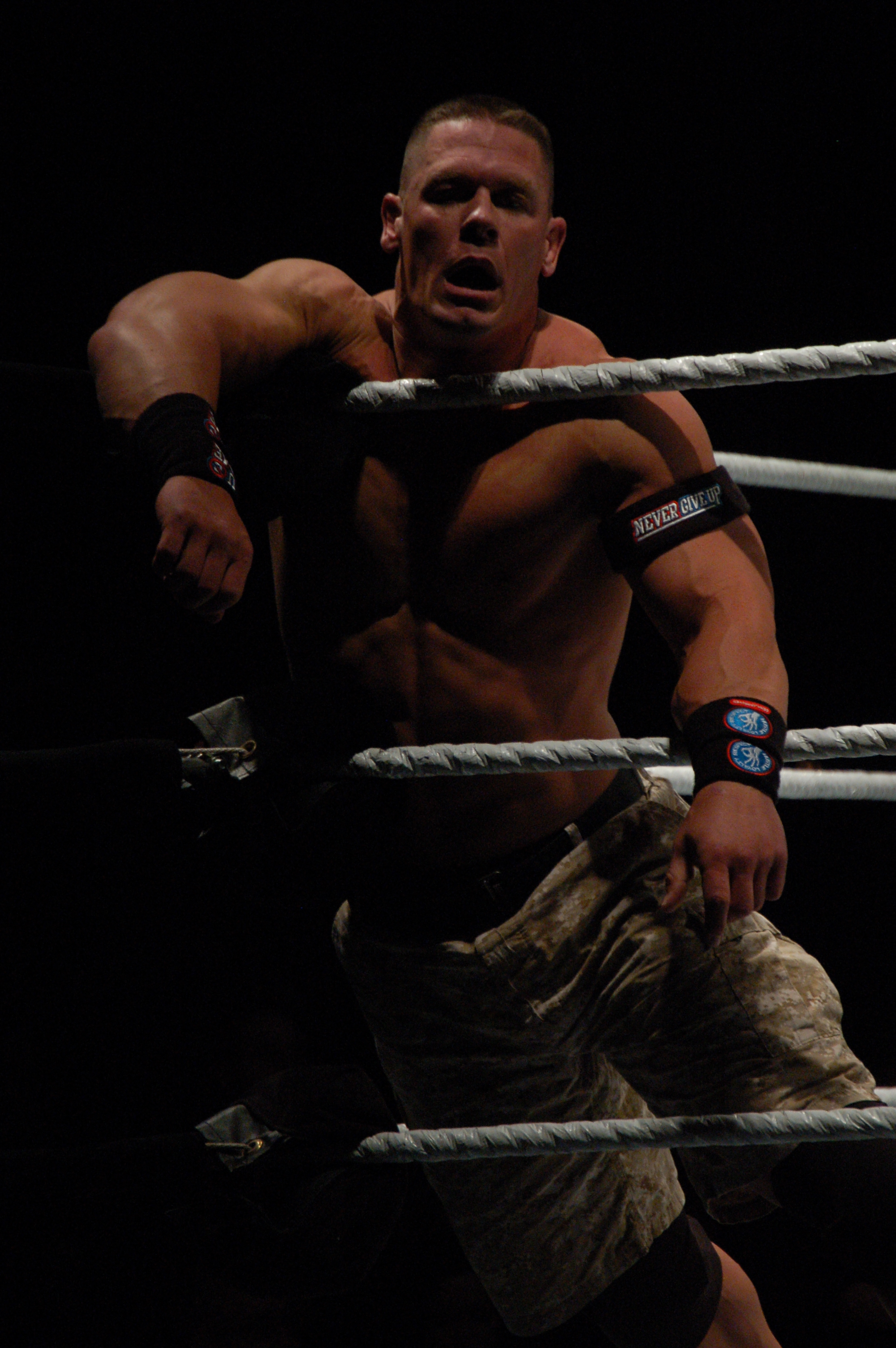 Cena takes a moment to recuperate during his match with Kane. Photo: Patty Hillhouse

Unless you’re in the right place at the right time, you won’t see a title change hands at a house show, nor will you get all the usual bang for your buck from the production side of things. However, giving wrestlers a chance to really interact with the fans, something they don’t tend to do in the same way for TV tapings because they’re playing to the camera not the crowd, is presumably as much a treat for the performers as the patrons.

Pro wrestling has often been described as a male soap opera, a comparison that might satisfy some. Tonight’s show proves that it really belongs in the same company as Pantomime Theatre, and in some ways being here can be as memorable as being at WrestleMania.