From 1993 to 2009, “Hardcore” Bob Holly was a mainstay on the WWE roster, surviving the Monday Night Wars, Montreal screw job, WCW takeover, and the tragic stories of Owen Hart, Eddie Guerrero and Chris Benoit. Now, with an announced autobiography, The Hardcore Truth, he promises to share stories no one else will tell.

“My book will be different because it’s about my life pre-WWE days and my perspective of the wrestling business. I will talk about things no one has dared to talk about,” Holly told SLAM! Wrestling. “It will be written in a very unique style thanks to Ross Williams who I’ve chosen to write my story. I believe this book will be an interesting and entertaining read. You will definitely want to read this book not only for what I am going to share but the exceptional brilliant style of writing Ross uses when putting words on paper.” 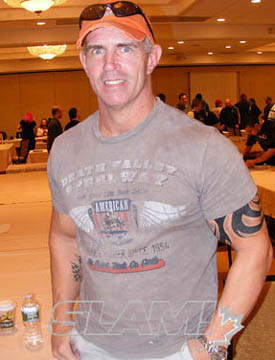 Bob Holly at a fan fest in October 2010. Photo by Michael Coons.

Holly’s choice of Williams is a unique one. A Drama and Language graduate from the University of London and Central School of Speech and Drama, Williams lives in Berkshire and works as a freelance writer, publicist and business advisor to assorted recruitment and wrestling companies. Having written about wrestling since 1996, he decided to start training to be a pro wrestler in 2009 — and ended up facing Holly in the ring.

“When reading some of the previous wrestling autobiographies, you get the feeling that accompanying writer doesn’t really know that much — or care that much — about wrestling. You won’t have that problem with this book,” promised Williams. “I’d be surprised if you found a single other wrestling book that has been written by two guys who have faced each other in a match!”

Besides the wrestling tales, Holly — real name Bob Howard — shares his personal stories, from growing up in California and Oregon, the son of an absent street-fighting father and hard-working single mother. At 19, he was entering tough-man contests to pay the bills for his his partner and newborn daughter, leading, eventually, to his WWE deal.

“Bob Howard first contacted me a little more than year ago, after reading Irv Muchnick’s Chris & Nancy. Since that time, he’s come together with Ross Williams and created one of the most intriguing proposals to ever come across my desk,” said Michael Holmes, a senior editor at ECW Press. “The book they’re writing is as thorough and wide-ranging, honest, fair-minded and insightful as any fight-sport memoir I know.”

Both Williams and Holly said that the deal with ECW Press was a good fit.

“When ECW Press agreed to publish my story, I was very pleased and look forward to working with them. The reason I am so glad they agreed to publish my book is because of any publishing company out there, they know the wrestling business and understand it which is very important,” said Holly.

“There could be no better company than ECW Press to publish this,” said Williams. “They ‘get it’ — their back catalog of books proves that. Of everyone we spoke to about this project, they were by far the most enthusiastic, the most genuine and have been thus far and, no doubt, will continue to be an absolute joy to work with.”

ECW Press is expecting the completed manuscript in early 2012 and is hoping to have The Hardcore Truth in stores ready for WrestleMania 29.

With intriguing chapter titles such as Bread, Gravy and Baby Food; Fighting for Food and Diapers; The Wrestling Graveyard; Racing Cars; Who the F*** is Thurman Plugg?; Fools Gold and Golden Fools; The J.O.B. Squad; Bob’s Back — Needs 24 Stitches; The Education of Cody Rhodes; and Betrayal, as well as promised looks at the likes of The Undertaker, Jeff Jarrett, Jerry Lawler, Triple H, Bret Hart, Shawn Michaels, Steve Austin, The Rock and Vince McMahon, The Hardcore Truth looks like a fascinating read.

“Bob is his own man. He’s fiercely independent and absolutely not under any contract to anyone, so can shoot from the hip without consequence,” concluded Williams. “Politics aren’t of any interest to him any more — the truth is. He’s done his time, he’s made his money — now it’s time to share the story.”