The sweet irony of a charity deathmatch

Rivulets of blood stream from a laceration sliced open by shards of broken glass.

A wooden table splinters into toothpicks as a human being is hurled through it. 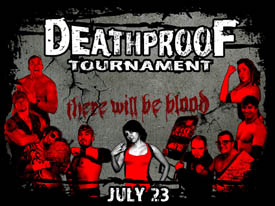 That last line — the charity bit — doesn’t seem to belong among the previous descriptions of “deathmatch” wrestling.

Then again, who better to understand the importance of well-funded healthcare programs than a crew of masochistic misfits who happily wallop one another with light bulbs, steel chairs and other unpleasant implements?

Vulgar, violent deathmatch wrestling for charity — it’s not really such a crazy idea, according to a friendly psychopath named Warhed, promoter and participant in the upcoming Deathproof Tournament in Kitchener.

“No one would expect the guys who hit each other over the head with furniture and bleed profusely to come together and raise money for charity,” says Warhed, one of the most popular hardcore brawlers on the Ontario indie scene. “But we’re human, and any good human cares about the wellbeing of others, whether a neighbour, coworker, friend, family member or stranger.”

With that in mind, Deathproof Wrestling is allocating $5 of every ticket sold for their July 23 show to cystic fibrosis research, with the hope of raising at least $1,000 for the cause.

So while the in-ring action will not be for the weak of heart, the event has a refreshingly good-hearted mandate.

The fundraising idea dawned on Warhed (Chad Gowing, when not wearing face paint) after he learned that one of Deathproof Wrestling’s most avid fans, 23-year-old Kimmy Ingram, suffers from cystic fibrosis.

Thanks to the notoriety of his previous Deathproof shows — which have earned the promotion the nickname the “Canadian Combat Zone,” inspired by the ultraviolent American indie Combat Zone Wrestling — Warhed knew he could draw a crowd. He also knew that Deathproof fans, although bloodthirsty between the bells, are generally decent people who don’t want to see anyone truly get hurt (when a wrestler was legitimately knocked unconscious at the last Deathproof show, the audience sat in hushed, collective concern until medical attention arrived).

Warhed knows that blood-splattered hardcore wrestling is not high art. It feeds some of the nastier instincts of human nature — bloodlust, vengeance and voyeurism, to name a few — so it’s definitely not for everybody.

But to truly enjoy a deathmatch, you also need a nobler human capacity — empathy. To root for the good guy (and to boo the bad guy who is slamming him into a big pile of thumbtacks) the audience must feel the pain too, at least in a metaphorical way.

So perhaps it’s not so strange that deathmatch fans, given their empathy for suffering, would happily chip in to support a medical charity such as the Cystic Fibrosis Foundation.

A deathmatch tournament with a conscience — who’d have thought?

Colin Hunter once accidentally sat on a thumbtack, which was the extent of his deathmatch career. You can email him at colinhunter76@gmail.com.