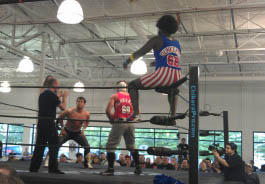 TAYLOR, Mich. — CHIKARA made its debut in the Detroit market a year ago with Bryan Danielson on the card fresh off being fired by WWE. From an interest standpoint, that was going to be tough to top. However, when it came to in-ring action, CHIKARA delivered yet again with a solid show from top-to-bottom, showcasing a style that was fun for fans both new and old.

In front of about 150 rabid fans at the Taylor Town Trade Center, many of whom stuck around long past the final bell to get photos, autographs and merchandise from the wrestlers, CHIKARA put together a show that would appeal to fans of many different styles of wrestling with “A Demon in His Pocket.”

In the main event, The Colony, the reigning King of Trios, took on the BDK trio of Claudio Castagnoli, Sara Del Rey and Tursas. This was originally supposed to be a matchup between the last two King of Trios champions, but Ares did not make the weekend swing due to a family emergency and fans were told prior to the show that the BDK would find a suitable replacement. That ended up being Del Rey.

As the three BDK members came out of the curtain one at a time, Castagnoli was roundly booed but that quickly erupted into loud cheers the second Del Rey stepped through the curtain, as she got chants of “Queen of Wrestling” and at one point in the match had to ask the fans to stop chanting for her.

The match was undoubtedly the best of the night, even better if considering Castagnoli and Del Rey were heading to New York for Ring of Honor’s big iPPV on Sunday.

With everyone laid out, the match came down to Castagnoli and Green Ant. Castagnoli hit Green Ant with everything but the kitchen sink but still couldn’t finish him off. He hit him with an airplane spin and a Very European Uppercut but Green Ant kicked out each time. Castagnoli decided to go for the Ricola Bomb, but Green Ant countered it into a Texas Cloverleaf and after a struggle, Castagnoli tapped, giving The Colony the win.

The co-main events of the evening saw action in the 12 Large: Summit series to crown a CHIKARA champion.

The match was a back-and-forth affair that saw Ophidian lock Quackenbush in the Death Grip several times, with Quackenbush almost going out on one occasion but managing to not let his arm fall a third time. Whenever a submission hold was locked in in this match (and there were many) the crowd chanted “please don’t tap”/”tap” depending on who they were rooting for.

Eventually, Quackenbush would hit one of his 1,000 moves, this a Black Tornado Slam off the second rope that finally gave him the win after 17:31.

In other action, Eddie Kingston also earned two points with a pinfall win over UltraMantis Black.

The match did have controversy, as not only did Vin Gerard linger around ringside for much of the match, but the referee counted Kingston’s shoulders down at one point despite his leg being completely on the rope. For a second it looked like UltraMantis would escape with a cheap victory but the referee immediately recognized his mistake and ordered the match restarted.

Once that happened, Kingston took over, finishing the match with not one, but two Backfist to the Futures, taking the fall in 11:56. He may have won the match, but following the contest, Gerard struck and took out Kingston’s knee.

In other action, the fans got their share of laughs when the BDK duo of Tim Donst and Jakob Hammermeier took on the Throwbacks — Sugar Dunkerton and Dasher Hatfield.

Everybody who came to a wrestling match saw a basketball game break out between Donst and Hatfield. Hatfield took off his usual baseball jersey, revealing a Dunkerton jersey underneath. Senior official Bryce Remsburg just happened to have a whistle in his pocket and it was on from there.

Donst tried to use some heel tactics to gain the advantage, but he was thwarted at nearly every turn. Hammermeier and Dunkerton used their arms as the baskets but Hammermeier tried to get greedy and move his hands. When the game finally broke down, he got drilled straight in the face with the ball, sending the crowd into laughter.

When the match actually resumed, it was Hatfield using the Grand Slam on Hammermeier for the fall at 13:24.

In other action, Chuck Taylor and Johnny Gargano knocked off Hallowicked and Frightmare in 11:44 when Taylor pinned Frightmare.

Gerard made Hieracon tap out to the STF at 7:06 and Gregory Iron rolled up Icarus at 8:07 for the win.

In a special attraction, the stars of local promotion CLASH Wrestling shined brightly, as CLASH champion Gavin Quinn and tag team champions Tommy Treznik and Ded Vaughn defeated Cameron Skyy and the team of Too Sweet, Bryce Benjamin and Joey Marx, in 10:19. The match was one of the best and most entertaining contests of the night.