Social media services like Twitter and Facebook have become the defining technologies of a generation, putting unprecedented means of instant communication into the hands of the populace.

These technologies can be used for social change — the recent uprisings in the Middle East were largely coordinated on Twitter and broadcast on YouTube — or simply for chit-chat and gossip. 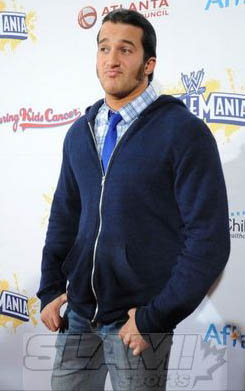 But social media can also be misused, and one demographic in particular seems hopelessly inept when it comes to online etiquette: professional wrestlers.

To help wrestlers avoid making complete dunderheads of themselves, as they almost invariably do when allowed to use a computer, we are pleased to present Social Media Etiquette for Wrestlers.

Rule 1: If you are new to Twitter, start slow. Perhaps get your feet wet by tweeting about what you did today, or post a link to a favourite video. Do not — repeat, do not — immediately start a verbal war by calling someone a “dickhead,” which is exactly what Bret Hart did to Hulk Hogan almost immediately after opening a Twitter account. In the same tweet, Hart made a wisecrack about John Graziano, who tragically suffered severe brain damage in a car accident with Hogan’s son Nick. Such nonsense is not for Twitter — it’s just for twits.

Rule 2: Have something to say. Tweets don’t have to be profound or verbose, but you should try to have something interesting to say. This simple concept seems to have been overlooked by Trent Barreta who, upon hearing about Edge‘s abrupt retirement, tweeted the following: #edge.
Thanks for the insight, Trent.

Rule 3: Never use homophobic slurs, even if you play a “heel” on TV. As a former journalist and the self-proclaimed “voice of the WWE,” you would think Michael Cole would know better than to call a co-worker a “faggot” on Twitter. But that’s exactly what he did, which was doubly stupid because WWE was already working with the Gay & Lesbian Alliance Against Defamation (GLAAD) to rid WWE programming of precisely that kind of numbskullery. Cole later half-apologized, tweeting that it was “not meant the way it was taken,” which implied that it was everyone else’s fault for not interpreting the wit and wisdom behind his clever usage the word “faggot.”

Rule 4: No death threats! This should be a no-brainer, but it seems Superstar Billy Graham is something of a no-brainer himself. Used correctly, YouTube can be a wonderful social media avenue for getting a message out to the world, but used incorrectly, as Graham recently did, it can expose you as a raving nutcase. In a recent YouTube video, Graham rambled thusly: “Chris Jericho, you can go straight to hell, and burn in hell, because that’s where you belong, and I’ll help get you there by cutting your tongue in half. I would be more than happy, Jericho, to take a pair of pliers and cut your tongue and watch you bleed to death.” It gets weirder: “Every time I crawl past your door, I wish I was somebody else.” Then there’s some gobbledygook about caskets and spitting on graves. As a rule of thumb: if making a YouTube video, do exactly the opposite of whatever Superstar Billy Graham does.

Rule 5: Don’t burn bridges. Life has a funny way of reuniting you with old coworkers and former acquaintances, so it’s best not to say anything publicly that might damage a relationship. So, Sean “Val Venis” Morley, this means that you probably shouldn’t have filmed a YouTube video in which you call Melina a “f***ing slut” and accuse John Morrison of trying to “turn that ho into a housewife.” Less obscene, but no less risky, was Rob Van Dam’s reaction to Drew Carey’s induction into the WWE Hall of Fame: “MAN I’M GLAD I’M NOT A WWE WRESTLER.” Comments like that will certainly guarantee you never become a WWE wrestler again.

Rule 6: No pooping! This point cannot be stressed enough: do NOT film yourself having a bowel movement and then post it on the Internet. Hulk Hogan, this means you. Granted, you seemed a little doped up from your recent surgery, so perhaps the medication had something to do with your unbelievably terrible decision to film yourself as you “unleashed a major toxic steamer.” The fact that you delivered a “courtesy flush” does not make it OK. Let your legacy be the whole training/prayers/vitamins thing, not your gastrointestinal plumbing regimen.

Rule 7: Leave your employer out of it: Unless you want to wind up unemployed, it’s best to leave your employer out of your social media presence. Of course, when Matt Hardy went bonkers on social media — creepily eating grapes and referring to his evil alter-ego Matthew — it seemed he was indeed trying to get himself fired. Now he’s reunited with his brother Jeff in TNA, and the two are free to film rambling, bleary-eyed videos in diners and post them on YouTube. But if you don’t want to get fired, perhaps it’s best not to make videos about how your current employer is “dropping the ball” and “missing the boat” by overlooking your incredible talent, as Zack Ryder has been saying in recent videos.

Rule 8: Never say to a fan “I hope your whole family dies,” or any variation thereof. Got that, Jeremy Borash? It should be noted that Borash denies making this tweet, and claims his Twitter account must have been hacked. Funny how someone would hack into a twitter account and make a random hurtful tweet directed at a stranger. But the rule remains: don’t wish death upon anyone’s family. Even Superstar Billy Graham doesn’t stoop that low.

There you have it — eight simple guidelines that, if followed, should drastically reduce the amount of mindless twaddle being tweeted by wrestlers. Of course, one could argue that we should return to the golden era of kayfabe, when the inner workings of the wrestling business were shrouded in mystery and wrestlers never broke character to speak publicly. Those were simpler times, when wrestling maintained an air of believability — good guys were heroic and bad guys were dastardly — and nobody ever, ever unleashed a major toxic steamer on camera.

Colin Hunter, who can be followed on Twitter @Call_Me_Colin and emailed at [email protected], is constantly amazed and amused by the stupidity some people manage to cram into 140 characters.