Like most TNA pay-per-view DVDs that hit the shelves, they’re basically the show itself with a couple extras thrown in. This year’s Sacrifice show is no different.

That being said, this DVD definitely serves its purpose and nothing more. Not exactly a bad thing if you ask me.

Nick Tylwalk watched the show and reviewed it for SLAM! Wrestling, so there is no need to recap the show. Matches of note that night saw TNA champ Rob Van Dam retaining against AJ Styles, Rob Terry retaining the Global title versus Orlando Jordan, Jeff Jarrett battling Sting and Douglas Williams winning the X Division belt from Kazarian. 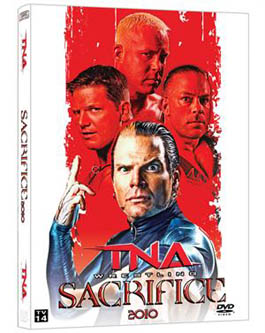 Tylwalk gave the show a 6.5/10 rating and from reading his review, that looks fair. The main event of RVD and AJ I’ve read was an epic match.

On this DVD, however, we get three bonus features that are common on TNA releases.

The first one is a collection of post-match interviews conducted by SoCal Val. I’m not sure if these are a DVD-exclusive, but the wrestlers she talks to — RVD, Mr. Anderson, Madison Rayne, Eric Young, Desmond Wolfe, Kazarian, The Motor City Machine Guns and Rob Terry — are decent in the ring and prove here they’re above-average out of the ring, too. Gotta dig Van Dam’s comment that the event after-party is at a local hotel in Room 420.

Val also does a nice job of doing the interviews and shows a surprising bit of personality that complements her red hair very nicely.

A Lee South photo gallery is the second feature and Lee shows why he’s one of the best in the business. His photos make the viewer feel as though they are right in the middle of the action. And based on his shots, it appears as though he indeed was.

The last feature on the DVD is the Sacrifice music video — “Shake It Out” by Manchester Orchestra. It’s a song that at first listen, either you like it or hate it. Personally, it gets two thumbs up. Not exactly heavy metal, but not exactly soft rock, the song and the accompanying video from the pay-per-view are very well put together.

The event and the features make this a solid DVD, but with it not being one of TNA’s top two yearly pay-per-views (Slammiversary and Bound For Glory), I’d suggest purchasing this only if you have cash burning a hole in your pocket or if you saw the event once and want to savor it again and again.