According to police, Turner was not wearing a seat belt and died at the scene of the accident Sunday afternoon. The 64-year-old Turner was driving a 2009 Chevrolet Cobalt when the car went across the center line, and hit a 2001 Ford Windstar head-on. The three passengers in the Windstar, including a three-year-old girl, were treated and released from hospital. 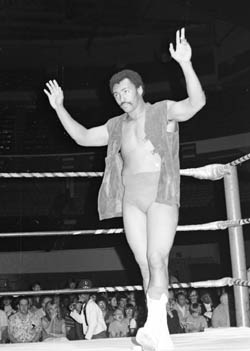 Clem Turner acknowledges the crowd before a bout. Courtesy of the Wrestling Revue Archives: www.wrestlingrevue.com

It will take weeks to establish what happened, said police.

Born May 28, 1945, in Cincinnati, Ohio, Turner was a running back at Woodward High School, and attended the University of Cincinnati, where he was a “workhorse” running back. Turner was a fourth-round choice in 1969 by the Cincinnati Bengals. The 6-foot-1, 236-pounder was the first local player chosen by the Bengals.

He’d already played pro ball, however, suiting up for the Toronto Rifles of the Continental Football League in the summer of 1967.

With his “Fu Manchu mustache” Turner stood out, and always seemed to believe in himself. “I’ve always had confidence in my running,” said Turner in 1970, “and I feel I can do the job. I’m always waiting for a good shot, a chance to get the big run and help the team win.” At least one preview of the 1970 season, however, didn’t think he would help: “Clem Turner, big hope of ’69, was [a] flop.”

From 1970 to 1972, he played for the Denver Broncos. In May 1973, the Buffalo Bills acquired Clem Turner and Jack Gehrke from the Denver Broncos in exchange for an undisclosed draft choice; Turner then failed the physical.

The next few years were a blur of teams and leagues that do not exist any longer. He played for the Portland Storm of the World Football League, which traded him to The Hawaiians. “The trade for Turner is one of those trades where you have to give up something good in order to get something good,” Storm Coach Dick Coury said at the time. “We think that in Clem Turner The Hawaiians are certainly getting an outstanding running back.”

He got his start in professional wrestling in the Midwest, in 1972, working in locations like Indianapolis and Detroit, during the football off-season. Never a top-of-the-card guy, Turner was a decent talent who lived off whatever name he had in football. For the time, his size was a little bigger than average.

Records show that Turner wrestled at least until 1975, working low on the cards in places like St. Louis.

For whatever reason, the success he had in college never translated well to the pro game. That’s not to say his college days were perfect either; he was suspended at least once. In a 1973 interview, Michigan football coach Bo Schembechler recounted a job interview he had in 1966 at Wisconsin where Turner’s name came up.

“What made me sick is that one of the kids on the committee says to me, ‘What would you do if you had Clem Turner on your team?’

“Clem Turner is a fullback from Cincinnati and this kid evidently was from that area. Turner is one of those players who always seemed to be in trouble.

“I glared at the kid and said, ‘I don’t know Clem Turner. I only know him as a player. How do I know how I am going to handle him?’ I guess this was a student member of the committee and I’m hot about the way he is questioning me. I’m in there for maybe 40 minutes and I just don’t care what is happening. As soon as I got out of there I called Ivy Williamson, the athletic director, and told him I am withdrawing. I can’t get out of there quick enough.”

In March 1975, he was hospitalized after being shot at his ex-wife’s apartment in Cincinnati. Turner was “treated and released after being struck in the chest by a small caliber pistol.” Dora Turner was charged with felonious assault, and told police she fired when Turner threatened her with a knife.

Turner’s name rarely seemed to show up until a 2007 story about ex-football players dealing with addiction to pain medication — a familiar story to the wrestling fraternity as well.

“It’s hell, man,” said Clem Turner in The Tampa Tribune, admitting to taking regular medication to combat the effects of 19 surgeries. He swore he was not addicted and the his pills were prescribed by doctors. “I need it to exist,” he said. “Honest to God, if I had known I was going to suffer like this for a moment of running up and down the field, oh, hell, no!”