Four of Big Vision Entertainment’s latest DVD releases have a wide range of topics. From Dragon Gate, to women’s wrestling, to OMEGA and to a documentary of life on the road, Big Vision, as always, gives the wrestling fan something definitely out of the ordinary – and that’s a good thing.

That said, let’s crack open the four-pack and discover the variety.

The Best Of Dragon Gate – Volume 1 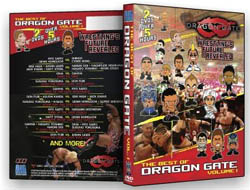 What a treat this two-disc set is! Over five hours worth of action from a promotion the average fan has no clue about, but should know about, is epic.

It’s hard to say which bout highlights disc 1, but the eight-man match between BXB Hulk, Jushin “Thunder” Liger, Jack Evans and Matt Sydal (Evan Bourne for you latecomers) against Naruki Doi, Magnitude Kishiwada, Masato Yoshino and Canada’s own Kevin Steen is a thriller, as are the King of Gate semifinal matches between Ryo Saito and Gamma and Masaaki Mochizuki and Dick Togo. The CIMA-Gamma Hair vs. Hair match is also well-done.

American fans maybe only get a glimpse of Japanese wrestling and even then, it’s mostly on Ring Of Honor cards. This DVD set will give those fans more than a glimpse. It will give those Johnny Come Latelies a reason to get hooked.

The Sydal-Horiguchi Open The Brave Gate championship match is unreal (and you thought Sydal was tearing it up in WWE – watch this match, people!) and so is the Open The Dream Gate title match between Liger and Fuji. Really, anything with Liger is worth having.

Japanese wrestling is truly an art form, whereas in North America, it’s mostly done for the entertainment factor. The Japanese have their high flyers and their mat wrestlers and rarely is a match done lacking chemistry. The fans clap and cheer as if they were at a sporting event. You rarely see signs in the crowd or idiot fans try and start a scrum with the wrestlers. Basically, Japanese wrestling, and everything associated with it, is very disciplined.

Needless to say, Volume 2 (when it gets released) has a lot of hype to live up to after a dynamite Volume 1. 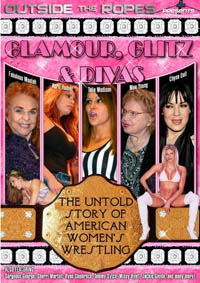 This is a fascinating documentary and the title pretty much says it all. Dedicated to the late Sherri Martel, this DVD focuses a great deal on women breaking into a male-dominated business and the history of women’s roles in pro wrestling.

Many of the interviews look to have come from previous RF Video spots.

One of the first interviews is with The Fabulous Moolah and Mae Young and as if we didn’t know how old Mae Young is, she discusses seeing Ed “Strangler” Lewis back in her Oklahoma childhood. Good stuff here and, sorry Vince, but she doesn’t lose her top. Bummer.

Moolah says she either wanted to be like Mildred Burke or the next Amelia Earhart. Pretty sure she made the right choice.

Other women who get air time include Baby Doll, who talks about how her parents were wrestlers and opened their own promotion in Lubbock, Tex., Luna Vachon idolizing her aunt, Sherri first getting the itch, Francine (wearing something low-cut) and Chyna remembering wrestling in the ’80s. Jasmine St. Claire also mentions Elizabeth and Madusa and the ill-fated LPWA. Wow. LPWA. We need a documentary on that!

The chapter “On The Road With April & Talia” follows Talia Madison (now known as Velvet Sky in TNA) and April Hunter. The opening scene is the cameraman bursting into a hotel room with those two and JD Michaels about to engage in, well, hanky panky. It’s obvious where this chapter will wind up. It’s exactly what the chapter says – on the road, with breakfast included. Nothing too extraordinary here, but boy, is Talia some serious eye candy, eh fellas?

Jackie Gayda, Luna and (dear Lord) Missy Hyatt contribute to the chapter on love stories. This is a pretty interesting segment as you hear the romance side from the ladies and most seem very genuine in what they say and believe and how hard it is to maintain a relationship, especially with a fellow worker.

Luna also has a segment on teaching a group of potential wrestlers at a camp or school someplace. She goes into detail on what life on the road is like and how to perform in the ring and make a match work. Nothing we didn’t already know, but the students seem to be hip to what she’s saying. A pretty cool 20-minute section here.

The creme de la creme of this disc is the chapter entitled “Catfights!” It starts with Tammy Sytch calling Sable “evil” and a disgusting word for a part of the female anatomy. Whoa there, Sunny! Luna also rants on Sable, but calls her and Marc Mero “very kind people.” Chyna also got along with Brock Lesnar’s woman, but said she was in the wrong business. This chapter would have been better with a Sable rebuttal, but only if she did it with the body paint she wore at the 1998 Fully Loaded pay-per-view. Baby Doll discusses Elizabeth to end the segment and then Tammy gets more air time giving props to herself as the first “diva” and the heat she has with Gayda.

Several of the gals discuss misconceptions and give advice in a later part of the DVD. MOre shoots here, including Missy wondering why people think she is a slut and whore. Hmmm. Baby Doll noting she made $17,600 from her 17 Great American Bash shows as a 24-year-old and $4,500 for a Starrcade show is also kind of eye-opening.

A bonus section of this DVD has six matches, including Talia vs. April, Luna vs. Alicia, Sara Del Ray vs. Nikki Roxx and a match with Sherri as a special ref.

All in all, this DVD probably could have been a two- or even three-disc set, but what’s here is a good start that makes the viewer want more. While mostly a lot of shoot interviews, these are decent and seeing legends like Moolah and Sherri, and even Baby Doll, talk about women’s roles in wrestling is a refreshing change from the floozies we see on TV today.

Life In The Fast Lane 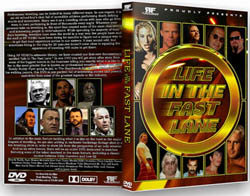 Words cannot do this DVD justice. Well, maybe one can – stellar.

Never has a DVD had a more appropriate title. When you’ve got guys like Rowdy Roddy Piper, Shawn Michaels, Ted DiBiase, Tully Blanchard, Vince Russo, Abdullah the Butcher and Matt and Jeff Hardy talking about life on the road, the ribs pulled on each other, traveling from city to city and really anything but in-ring action, this is a recipe for a unique DVD.

Michaels and Marty Jannetty address their reputations as partiers and don’t exactly deny it.

Barry Windham tells a story of when Mike Rotundo “wigged out” and quit the then-WWF in Baltimore one night after not having been home or had a day off for 96 straight days. Windham also rants on the travel schedule on how it was never geographically-adequate. He said one night they’d be in Seattle, the next night in Miami, the night after that in New York and then the following night in San Francisco.

A hilarious tale of Jake “The Snake” Roberts and his python Damian’s affinity for his second wife Cheryl’s high heels is detailed by Jake. One night after beating a jobber, he went to dump Damian on his opponent, only to have Cheryl’s heels come out first. Hahahahaha!

The Honkytonk Man has a chapter to himself and has a cameraman capture him backstage at an indy show. Life with Tajiri and Super Crazy gets some mention and, wow, these guys are, well, crazy.

For each wrestler’s segment, the chapters are kept short and maybe this hurts the DVD, but it keeps the viewer’s attention as they wonder who’s next and what hijinx is next upon us.

Raven quitting WCW, Chris Candido at a party at Sandman’s house, Lex Luger’s Lex Express tour during the summer of 1993, Rick Martel being left on the side of a Florida freeway naked, Mr. Fuji’s ribs, Abdullah demanding good money for an interview, the Road Warriors getting lost in New York City, Ricky Steamboat telling about flying to Australia immediately after WrestleMania 2 in Los Angeles, Larry Zbyszko being locked out of his hotel room by Andre the Giant and Sabu telling a Louie Spicolli urination story bombard the DVD and each story will make you laugh.

Bonus features include unedited interviews with a smattering of wrestlers, including a 10-year-old-looking Rey Mysterio sans mask, and three matches – Eddie Guerrero vs. Low Ki, Super Crazy vs. Tajiri and Jake Roberts vs. The Sandman. A Piper’s Pit with Kevin Von Erich is also included.

Definitely one of Big Vision’s brag pieces, and rightly so, Life In The Fast Lane is a solid compilation of shoot interviews about how grueling, crazy and humorous life on the road as a wrestler can be. It might be stuff you’ve seen before (many interviews are RF Video -produced), but worth seeing again. And again. 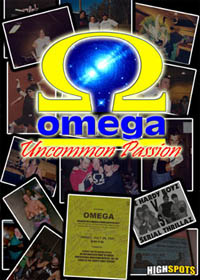 This DVD will totally erase any stereotypes one may have about OMEGA (Organization of Modern Extreme Grappling Arts) in that it’s simply a bunch of kids staging matches in backyards with old mattresses. In fact, nothing could be further from the truth.

This promotion was started about 12 years ago in the Carolinas by Matt and Jeff Hardy, among others. Matt calls OMEGA “the X Division before they even started to think about the X Division.”

In watching this, it’s such a well-done piece, especially the documentary side, that it rivals, or arguably tops, anything WWE has done regarding a documentary. The matches are great on this set, but are really a bonus piece when you consider how thorough the documentary is.

Co-promoter Thomas Simpson gets significant face time, as do the many wrestlers involved, most notably Matt and Jeff, with the latter’s promos bring very bizarre. Very bizarre. And yes, more bizarre than his face-painted ones from nowadays. Just figure this – his name in OMEGA was Will O’ The Wisp. Very bizarre.

The bulk of the matches take place in small high school gyms, but to packed houses. The wrestlers play to the crowd as if it’s Madison Square Garden.

Extras on disc 1 include Garner discussing his first meeting with Vince Russo, courtesy of The Rock, and Simpson talking about a party at his parent’s house after a show one night and a couple other short stories from the prime of OMEGA.

Disc 2 is a compilation of matches (most in low quality and with PA commentary, but that adds to the mystique of OMEGA) and three promos that, again, might be better than the scripted mumbo-jumbo we see every week on WWE programming.

A couple Hardy Boys matches dot disc 2. These are better, if that’s possible, than their classics from their WWF heyday. The Helms/Moore-York/Matthews match is also put together very well, much like the Surge-Wisp match.

Though OMEGA folded in 1999 when the Hardys got their chance with the then-WWF, this DVD keeps the memories alive and is a set that should be watched time and time again.