The new card set from Topps, 2008 WWE Ultimate Rivals gives collectors a bang for their buck considering it sells for around $40 and it lets them re-live some of the most memorable matches in the history of the federation. 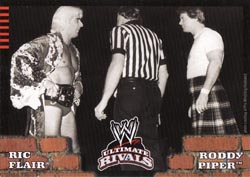 These cards are sort of a throwback because of the ingenious “Flip ‘N’ Fight” (read the pack for details on how to play) aspect, plus the action photography is second to none. The WWE sets continue to astound me on the quality of their photographs and the black and whites have a certain “Flair” to them.

Okay, I am letting everybody know that my favorite card is the Ric Flair/Dusty Rhodes. Both grapplers were masters of the mike, neither could outdo the other, and in the ring they each had their own unique style and either wrestler could bring the house down on any given night.

The worst of the rivals are Funaki/Val Venis, Doink/Bam Bam Bigelow (where’s Dink?), and Jamie Noble/Hornswoggle. When you have a checklist to choose from that can only include the talent that is under contract and you must include them all, there will always be a few reaches.

Collectors can expect to get a complete 90-card base set and some sort of guaranteed hit in the form of an event-worn relic or an autograph card. Again, for the price there is a lot of value built into this set. My “Ringside Relics” card was of John Cena. The sharp-looking card shows him doing the “you can’t see me” hand signal but the picture doesn’t show him wearing the championship belt — but hey, you can’t win them all. The card looks like it is a piece of a sweatshirt. From a quality control standpoint, there is a hairline crease in the card. I think that may have happened in the creation process and not shipping since all the other cards were flawless. Topps will replace that so no worries there. 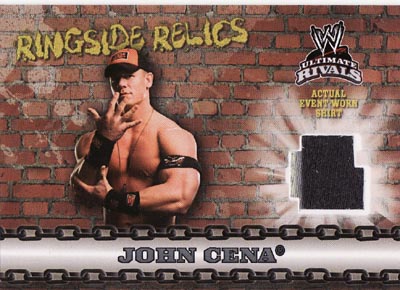 The edge-to-edge pictures are nice; the information on the back is good, and the inclusion of “Motion Cards” (there are 10 in all) was a nice touch. The quality of them is good but the design has a big issue. There are no names on the front or the back of the card that explain the picture or even tell the collector who they are looking at. I could make mine out but a new WWE collector might not know that. I got three in this box. 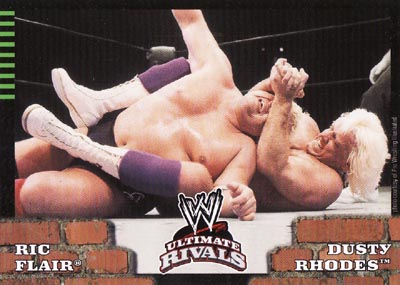 The Divas are in this set but for a change they really take a backseat because many of them have not wrestled each other enough to create Ultimate Rivals. With that said, some of these cards might make a lot more sense down the road if this current crop continues to wrestle a bit more instead of having bikini contests. All in all there are some very sexy shots of Mickie James, Maria, Candice Michelle and Kelly Kelly to name a few.

All in all I was very satisfied with this set and I think the guaranteed hit makes sense for collectors to get this by the box. If not you stand the risk of getting a lot of duplicates and that’s not going to help you with the Flip game.