Lauer’s book a good glimpse at a day gone by

In all likelihood, Harvey Wippleman couldn’t come of age in today’s wrestling. There’s not much of a place in the business any more for a scrawny, street-wise kid who had nothing going for him, other than a lot of guile and a load of endurance. 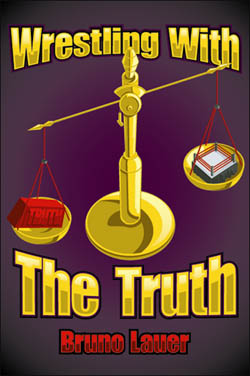 So even though the story of Wippleman, Bruno Lauer by birth, focuses on times as recent as the 1980s and 1990s, readers of his new autobiography are left with the sense that he’s a product of a bygone day.

And there’s no question that Lauer, a jack-of-all-trades for WWE for several years, understands that he was aboard the last caboose to leave the deteriorating territorial era that dominated wrestling for most of the last century.

“Enjoy the time while you can,” he advises, “because time passes by quickly, and before you know it, you’ll be watching the train pull from the station without you. And like pulling your fist out of bucket of water, the hole left by your (or my) departure will be filled as quickly as the space in the water where your fist had been.”

That attitude, expressed toward the conclusion of Wrestling with the Truth, Lauer’s recently-released tome from Crowbar Press, has a touch of fatalism to it, and is by no means representative of the other 233 pages of raucous, funny, and frequently alarming tales about his time in wrestling.But it underscores the point that Lauer, mostly known as “Downtown Bruno” or Wippleman, traveled a path that has long since been shuttered in favor of professional recruitment and exacting career development. Imagine today’s WWE tapping a western Pennsylvania punk whose teen years were dedicated to sprawling on car hoods, smoking cigarettes, and drinking beer with no particular ambition in mind. As Lauer quotes wrestler and buddy Tazz: “We could be digging ditches for a living.”

That’s what makes Lauer’s introduction into the business particularly fascinating. Idly attending a trivial wrestling show at a Pennsylvania fair in 1979, he agreed to help break down the ring in return for admission. He hooked up with the company as it toured Ohio and found an unlikely mentor in Lord Jonathan Boyd, one-half of the Royal Kangaroos, and a wrestler who had, to be charitable, seen better days.

From there, Lauer bounced around with something little more than aimless direction until he fell in league with Geeto Mongol, a trainer and promoter in Pennsylvania. Trivia answer: Geeto dubbed the newbie Dr. Lennerd Spazzinsky — Mongol was never a threat to win a spelling bee — in the hope, mostly unrequited, that fans would chant “Spaz” at Lauer.

Most of Wrestling with the Truth is dedicated to those kinds of travails, since caring for Lia Maivia’s cancer-stricken dog in Hawaii could fairly be called a “travail,” before Lauer eventually earned his spurs in Memphis as “Downtown Bruno.”

Starting in 1986, the little “punk” took over the position of lead heel manager in Memphis, Tenn., after Jimmy Hart headed to the WWF. Jerry Lawler was instrumental in Lauer’s career, as was a local behemoth named Sid Eudy, who took a liking to Lauer, by now a successful mixture of the physical prowess of TV’s Gilligan and the popularity of a repo man.

Here a diversion is in order: Lauer presents as full a picture of Eudy, then working as Lord Humongous and later known as Sid Vicious, as we’ve ever had from an insider, and it’s sure to be fodder for Internet bulletin boards. For example, during their first trip together on the road in Alabama, Lauer heard a mysterious “click, click” in the middle of the night. Flicking on a light, he found Eudy “opening and closing his incredibly large knife, over and over again, and grinning at me like the Joker in the Batman movie.” No surprise, then, that a sleepless night ensued.Eudy and Lauer had their shares of up and downs even through their association in the WWF in the early 1990s, though Lauer ultimately is even-handed about the relationship since Eudy helped bring his “little buddy” to the federation. But the backbone of the book consists of stories of Lauer’s work with Eudy and others in the Southern territories that were drying up in the late 1980s.

If you want a lot of exposes about backstage antics in the WWF, you’d be best advised to look elsewhere. Lauer’s work in the WWF occupies only the last one-third of the book, though those sections are chock full of behind-the-scenes insights into riddles such as why Curtis “Mr. Hughes” vanished so quickly from the scene and what possessed WWF officials to push the uncoordinated Giant Gonzalez into a feud with The Undertaker.

Let there be no mistake — Wrestling with the Truth bears little resemblance to the more reserved autobiographies of, say, Jack Brisco or Steve Williams. Lauer vent his spleen on camera as a manager, and, in some seriously twisted booking, as the WWF women’s champion in 2000. And he’s brutal — and he emphasizes, honest — on some of the folks he encountered during the years, such as Bertha Faye (“a problem drinker”), Kamala (“constantly bitched and moaned about racism and prejudice”), and particularly Joey Marella.

Marella, a referee and son of legendary wrestler Gorilla Monsoon, was behind the wheel during a horrific 1994 car crash in New Jersey that claimed his life and severely injured Lauer. The incident spans several pages, and Lauer is unsparing his criticism of an accident that brought him to the brink of mortality and cost him $10,000 in medical expenses. “Joey was a loser, and not only was it a miracle that he didn’t kill me, it would be a miracle that he didn’t kill himself or someone else sooner than he did.”In fairness, Lauer is equally hard on himself and his penchant for alcohol, which landed him in jail in Memphis and nearly ended his career. “I’ve been in prison… I’ve been in church and I’ve been through hell,” he said.

Beyond the road stories and observations, though, one conclusion is inescapable — Lauer is the last of a dying breed. His rise from a street kid to a recognized wrestling manager represents a career path that’s gone the way of the territorial system that produced him; in fact, managers today are about as rare as 60-minute matches. Like his work or loathe it, then, Lauer has provided a valuable service, a warts-and-all look at the ways things once were, and are unlikely ever to be again. “I’m still in debt, and I’m not financially independent, but guess what?” he asks. “I’m a happy, grateful, secure, man.”