TNA back in the card business

Total Non-Stop Action Wrestling hasn’t had a trading card set put out of its stars since 2004. Needless to say, when TRISTAR stepped forward to put out the just-released set, they had some serious updating to do. 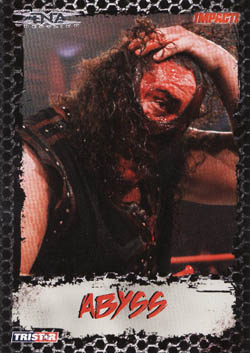 For around $15 it’s well worth it to be able to get a complete set. The photography is excellent and the overall card design is good. The set has a lot of nice cards and I especially liked getting the base cards of Abyss (see the real bloody gash on his noggin), Kurt Angle, Kevin Nash, Samoa Joe, Sting, Traci Brooks, Christy Hemme, and the first-ever Knockout champ Gail Kim. 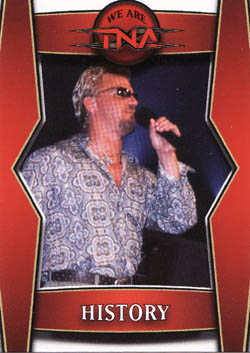 Now let’s talk about the subsets. “Mike’s Magical Moments” are cards written by TNA broadcaster Mike Tenay. When he talks about his favorite moments people should listen. He is a smart man, a nice man, and I have personally seen him at a few collectors’ shows. He adds a lot to every broadcast.

The “Then & Now” is my favorite. I have loved this idea since I first saw Topps utilize this in their baseball cards in the ’70s. My favorite card was of Robert Roode. The first pic shows him while he was wrestling in Nova Scotia back in 2001, and then he is shown circa 2008. The funny thing is I think he looked better back in 2001, but I’m not an image consultant so that’s just my opinion.

“Muscles, Ink” shows off some of the crazy ink that these superstars sport and I saw some nice shots, and very tame shots. I would have pushed the envelope a bit more in this area. On the muscles side a picture of just abs, or just a bicep muscle on the front of a card can be a bit weird. There are pictures on the back for both types and they are top-notch.

“Thoughts … by ‘Big Sexy'” Kevin Nash cards are a good idea but the pictures and font size on the front are a bit too small. No, I don’t wear glasses but for those that do they may have to hold the card up close. The same issue exists on the back, but I love his stories and the one about he and his brother trading Harmon Killebrew and Al Kaline for a Cookie Rojas card (on BS-5) in 1968 is terrific. They needed that card to complete the set so they overpaid just a bit. 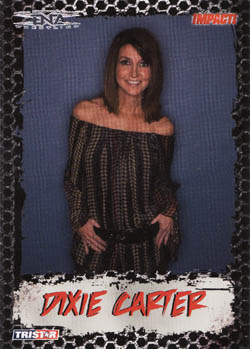 One subset that didn’t work were the “We Are TNA” cards that try to show off the TNA look on a card but fail in a big way. The photography is good but it is overshadowed by the red arches that are just disturbing to look at and they detract from the picture. On the Jeff Jarrett card at right there is a black haze on the former champ’s head because of the black that exists inside the arches. It bleeds over on the other cards in this subset as well.

One more card that doesn’t work is the Dixie Carter card. I think she has done terrific things with TNA and she looks good, but she doesn’t need a card since she isn’t on TV — it just seems forced. I never collect cards or autographs of owners. Maybe that’s just me.

Wrestling rookie cards have yet to gain any kind of status in the hobby but some first time cards of Eric Young, Homicide, Alex Shelley and O.D.B. might gain some popularity as the years go by. Maybe even Dixie Carter.

Hey, for the price tag the set is well worth it. I wasn’t able to get any production numbers but the sense is that they didn’t oversaturate the market and that means they will be collectible down the line.

Russ Cohen, the producer of Card Corner, is a longtime wrestling fan from the northeast.