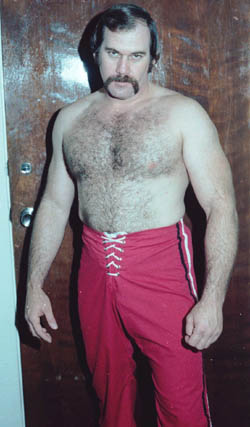 Ron Slinker, who died March 28 in Tampa of a liver disorder, used his real life martial arts expertise as a pro wrestling gimmick and, surprisingly, it worked.

He never really became a household name in the world of wrestling, but was known mostly for his work in the southeastern United States, primarily in Florida.

In the ring, some say Slinker never was 100 percent at ease with what he was doing. Barry Rose, owner of CWFarchives.com and a local fan of the Florida territory back in the 1970s who also ran several wrestler’s fan clubs, first met Slinker in 1977.

“Ron wasn’t what I would call a natural, even though he was obviously a very gifted athlete,” Rose said. “I worked out with Ron a few times at the gym (I was still a kid at the time) and Ron was very gracious to my father and myself.”

Rose went on to talk about Slinker’s in-ring ability.

“Ron seemed very eager to learn, yet he never looked entirely comfortable within a ring,” said Rose. “Part of that was Ron working a martial arts gimmick and the fact that he took to wrestling later in life after years of training as a martial artist. I’d say he worked better as a heel, though he did get over to some degree working as an underneath babyface in Florida. His heel stuff which came later in his career was more interesting, at least in my opinion.”

Following his retirement during the early 1990s and after a run as Caribbean Junior Heavyweight champ, Slinker would manage Bass and Robert Fuller before becoming a promoter in Florida. It was there that Slinker met Rob Szatkowski and suggested he change his ring name to Rob Van Dam and also introduced him to Japanese promoter Shohei “Giant” Baba.

“Ron gave me the professional name that stuck with me throughout my career back in 1991,” Van Dam said on his MySpace blog. “Ron also got me my job with Bill Watts in WCW in 1992 and when Bill refused to let me use my professional name, Ron came up with Robby V. Of course, if you watched the show back then, you saw Robbie V, or Robbie Vee, or, well, who noticed anyway. I met Ron in Tennessee when I wrestled for USWA when he was there to see his son-in-law Tex Slazenger. He was the first promoter to tell me that I was going to be a big star. Part of paying my dues involved driving down to Florida to sleep on this guy’s floor when I wasn’t even old enough to drink. You’ll read all about it some day in the big book.” 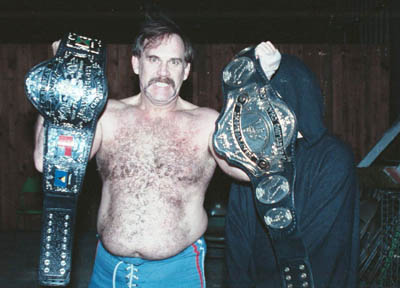 Slinker was also the stepfather of wrestler Dennis Knight, who worked as Mideon, Phineas I. Godwinn and the aforementioned Slazenger. As well, Slinker was one of The Rock’s original trainers when the Hollywood star was known as Flex Kavana in the USWA. In Florida and in the northeast United States, Slinker was a member of Kevin Sullivan’s revolving army and also wrestled for promotions in Tennessee and Alabama as a babyface.

“He was pretty strict,” his son, David Slinker, Jr., told the Tampa Bay Times. “He was the type of instructor that didn’t just talk. If he wanted you to do something, he’d show you. He expected a lot of you.”

At home, however, was a different story.

“He was lots of fun,” said Slinker’s daughter, Dina Myers, also in the Times. “He was just like a big kid.”

Slinker’s liver problems were attributed to a lifetime of alcohol addiction. His son said he always tried to turn his life around, but just couldn’t find the right path. David Jr. also noted that his father never brought his troubles home with him.

After he joined the Marines when he was just 17 years old, Slinker eventually earned a college degree from the University of Tampa and was a Tampa police officer for 10 years. He also appeared in the 1981 film Mr. No Legs, a kung-fu/action flick.

While news of Slinker’s passing didn’t exactly come as a shock to those that knew him best, Rose was asked if Slinker’s death could be deemed “tragic.”

“That’s hard to answer,” Rose said. “Ron had spent much of his life partying to excess and had some serious personal problems at various stages of his life. He passed from liver failure brought on by years of heavy drinking, but he was a good guy.”

Slinker is survived by two children, one grandson, two brothers (one his twin), a sister, his mother and many nieces and nephews. His funeral service was held April 2 at the MacDonald Funeral Home in Tampa.