While Xtreme Pro Wrestling may not be well-known to the average fan, Big Vision Entertainment’s release of the first two seasons of XPW TV shows should change that.

XPW is your typical blood, guts and female breasts style of wrestling. Think the original ECW and multiply that by 20. You get the point. 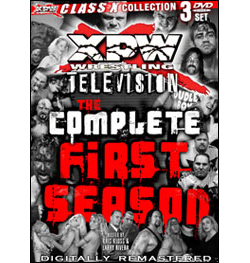 The first season of XPW, circa 1999, is a three-disc set with the main focal point of the first disc is Shane Douglas and his hyping of XPW and then bolting for WCW. Many a shoot interview in the XPW ring in Los Angeles (including a confrontation with XPW owner Rob Black) is shown and to the dismay of this reviewer, it’s all PG. There are more censors in these interviews than actual talking. Definitely not extreme and this is a constant on all three DVDs — a major downer. Even the fan’s chants are censored.

But hearing Douglas tell Hulk Hogan to suck his, ahem, is a nice touch and makes it seem genuine, which it may have been.

However, top-notch matches are included in season one such as Chris Candido vs. Damien Steele, Candido vs. Homeless Jimmy and Axl Rotten vs. Supreme vs. Kronus. And anything with Sabu is worth a peek. Being nit-picky, many of the matches are edited (why?), but the finishes are at least seen most of the time, even if the action is shot from seemingly a cheap hand-held camera.

What each season has going for it is that the viewer has many options when watching it, be it watching by each week’s episode (13 of them altogether), just the matches (your best bet), or the entire disc, each of which is three-plus hours. Hosts Kris Kloss (Wrestling Society X) and Larry Rivera are outstanding in calling the matches as well and unlike the aforementioned downer, these guys keep the viewer tuned in all disc long. Not sure one can say that about Mick Foley and Michael Cole or that Mike Adamle clown.

On the third disc of the first season, a bonus chapter has Steele and the smokin’ hot Jasmine St. Claire in a promo shown being rehearsed ahead of time with cuts and takes and two matches from fan-cams. Not exactly groundbreaking material, but worth the watch as racial comments and curse words go without bleeps. The in-ring matches continue to be sadistic. That’s one thing that is certainly not lacking on these compilations — hardcore at a whole new level.

Included on the second season are 14 new episodes and what XPW proclaims the most important match in the company’s history to that point with Sabu against the ageless Terry Funk. The matches themselves are few and far between and several never-before-seen matches are part of the bonus section. A good bonus match to check out is on disc two between Christopher Daniels and Donovan Morgan. The legendary King of the Death Match between Supreme and Messiah is a highlight of season two.

Tool facing Johnny Webb is another match featured. This one has the infamous “Violation of Jessica Darlin” segment.

Some of Black’s greatest segments are included here, including his personal intense shoot on Paul Heyman. There is also a piece on why Homeless Jimmy is “homeless.” Good stuff here.

Much like the first season, all three discs (over 10 hours) of the second season can be viewed episode by episode, just the matches or straight through. Kloss and Rivera continue their on-screen mastery of calling the matches and seem to have even better chemistry here.

Pogo the Clown gets air time in the second season and this guy, for those that don’t know, is an agile 400-pounder. He’s not in the Doink or Big Daddy V mold and that’s a good thing.

Season two is promo- and backstage-heavy and tends to get old after a while, but it doesn’t take away from what XPW is/was.

XPW, like the old ECW, was solid at its peak, but, unfortunately, the company’s time is long gone. XPW, also like WWE’s (read: Vince McMahon’s) version of ECW, may be back in name only, but from watching much of these 20-plus hours of XPW material, Big Vision does an above-average job of keeping XPW memories alive and still bleeding.

Matt Mackinder wants to see more XPW, but lives 3,000 miles from Los Angeles – too far to drive with the cost of gas these days, for this weekend’s one-night only reunion show.