When I sat down to write my first column — an introduction, of sorts — I thought it would be easy. What I didn’t realize was how hard it would be to find a place to start.

Since debuting in 2004, wrestling has taken me to eight different countries, from England to India. I’ve had the opportunity to see some of the world’s most famous sites, like England’s Big Ben and Spain’s Familia Sagrada. I’ve also had the chance to discover some less-known sites that should really be on more maps, like England’s Ye Olde Chershire Cheese.

Most importantly to me, though, I’ve been able to do what I’ve always wanted to do — wrestle around the world — and have been lucky enough to discover a passion for traveling at the same time.

My dream of wrestling internationally stemmed from my admiration for wrestlers such as Owen Hart and Chris Jericho, who spent time early in their careers wrestling overseas. It became very important to me to travel to different places and try to learn what each place has to offer. What surprised me, although probably shouldn’t have, is that some of the places I learned the most from were the places that I found the most difficult to wrestle or live in, like my time spent in Mexico. In some cases, what I learned really had nothing to do with how to do a certain hold or put a match together, but taught me about what I’m capable of dealing with and overcoming on my own. 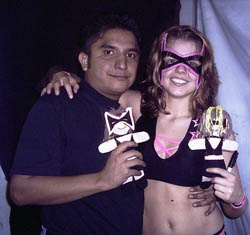 Here I am having a “doll” in Mexico.

This weekend marks a special day in my career, and it’s my past travels that make it so special to me. Since I turned 18 in 2005, I’ve traveled to Mexico, Europe, India, and 25 U.S. states, wrestling in 15 of them. Unfortunately, I’ve never had the opportunity to see my own country. My travels within Canada have been limited to southern Ontario and a few nearby cities in Quebec, with a weekend trip to British Columbia thrown in just a few weeks ago.

On Thursday, April 24th, I started my first real Canadian tour. The 18-day tour will take us across Nova Scotia and New Brunswick before ending with two shows in Labrador. The opportunity to see eastern Canada — a place I haven’t visited since I was eight years old — is something I’ve been very excited about since I was first booked on the tour almost six months ago. Visiting different countries has been rewarding to me both personally and professionally, but it also made me curious as to what my own country has to offer, and if it’s current wrestling scene carries the lessons of the legendary wrestlers who once performed here.

My next column, which will be finished shortly after I return home on May 12th, will feature my thoughts and stories from my tour with Mainstream Wrestling. This column will act as something of a journal for me, where I will write about my current travels, recount stories from past trips, and hopefully shed some light on how much independent wrestling has to offer in every part of the world.