It has been said that MsChif’s spine is either non-existent or it has to be made of lime jello.

There seems to be no other way to explain how her 5-foot-7 frame can be contorted and folded like it’s a piece of origami paper.

In her memorable bouts with Cheerleader Melissa (Melissa Anderson), SHIMMER fans have witnessed MsChif being folded completely in half while stretched over the guard rail and bent so far back in an inverted cloverleaf MsChif’s foot was used to kick her own head. 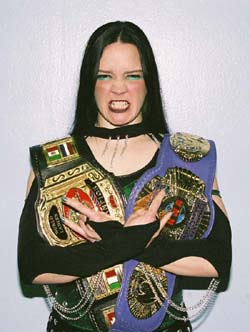 Along with her agility, fans are digging her metal character. Announced as “hailing from the inferno” MsChif, attired in green and black tights, makeup and hair, lets out a primal scream and heads down to the ring.

And for an extra dose of danger and unpredictability, there’s the mysterious green mist, a substance that MsChif spits out on her opponents to distract them and often gain the pin fall.

“MsChif has a large fan following,” reveals Dave Prazak, SHIMMER promoter. “She’s very much the modern women’s wrestling equivalent of the Great Muta back in 1989 in that she pulls off some amazing maneuvers in the ring, and she has a cool character, complete with the mist, to go along with it.”

Surprisingly the woman behind MsChif, who prefers not to give her real name due to privacy concerns, says the character is very similar to herself — minus the violence of course.

“I’m one of the nicest freakin’ people you’d ever meet,” laughs MsChif, who is noticeably quieter than her in-ring persona. “It’s like Jekyll and Hyde when you actually meet me compared to when I’m in the ring.”

But all the same, she shares that in her spare time she enjoys listening to black metal music and watching horror movies.

MsChif’s interest in wrestling is a familiar story. She grew up loving the sport and was particularly fond of tag team wrestling; with her favorites being the Rock and Roll Express and the Rockers.

A gifted athlete, her “Gumby-like” talents can be attributed to 15 years of dance involvement, 13 years of gymnastics and two years of tae kwon do.

In July of 2001, MsChif decided to make the switch from fan to fan favorite. She decided to train at Gateway Promotions. As a college graduate and having a full-time career as a Genetics Scientist, the school’s location in St. Louis, Missouri, where she lived, was the most convenient.

“I didn’t have the money to just uproot and train to wrestle, I had to make a living too,” she comments.

Under the tutelage of Johnny Greenpeace and Jack Adonis, MsChif went through drills and learned how to take bumps. After eight training sessions she had her first match against a wrestler named Christine. 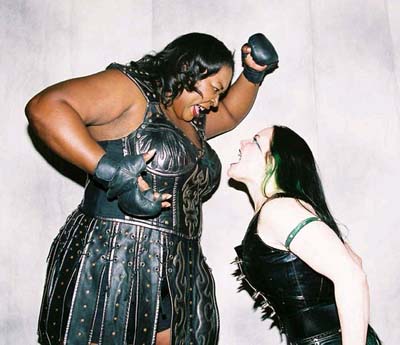 Amazing Kong faces off with MsChif. Photo by Jill McKee

“It was totally nuts,” she recalls with a laugh. “But the promoter promised this guy he’d have a women’s match and he decided to put us out there. She (Christine) had been training for six months. I guess we did decent enough.”

As for her character’s inspiration and origin, she laughs hard and admits she doesn’t know where it came from. The promotion wanted something crazy and this was her version of their interpretation.

MsChif stayed with the organization for approximately two years. She says she never really saw wrestling as a vehicle for fame or fortune, to her it was fun and something that she loved doing. She didn’t really focus on moving up in the ranks.

Things started to change when MsChif started accompanying her Gateway tag team partner, Delirious, when he would wrestle for IWA-Mid South. It didn’t take long for people to notice this most unique wrestler.

Prazak was among those immediately impressed with MsChif’s athletic ability. After viewing her demo tape given to him by Delirious, he knew she would be a great addition to his new wrestling promotion, SHIMMER.

“She was pulling off moves that you rarely see female wrestlers execute in the United States,” recalls Prazak. “We wound up booking her for a show in northern Indiana a few weeks later.”

MsChif says she enjoys the different styles of wrestling she encounters in SHIMMER and the overall opportunities they have as an all women’s organization. At the latest taping for the promotions, Volume 9 DVD, she faced Amazing Kong, an adversary almost six feet tall and weighing over 240 lbs. Although not victorious, MsChif claims a personal victory as all the fans gave them a standing ovation and erupted into a “SHIMMER” chant at the match’s conclusion and the ring announcer proclaimed, “You’ll never see a match like that on TV.”

“A lot of places don’t put a lot of focus on women’s matches,” comments MsChif. “A lot of places would give you a six or eight minute match. You can’t really do a lot in that period of time. Here at SHIMMER, they give you 20, 30 minutes or more. It’s really cool.” 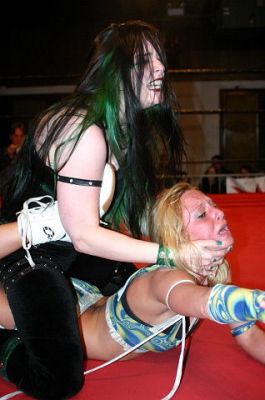 MsChif takes it to Daizee Haze. Photo by Mary-Kate Grosso

The change has come with a price. Throughout her career MsChif has suffered several injuries including two concussions, having both her shoulders separated, a severed left ACL which remains that way today, chunks bitten out of both sides of her tongue and her pinky finger was dislocated three times in one match.

“I had to put it back in place each time just to use that hand to finish the match,” she reveals.

Injuries aside, MsChif says she’s thrilled at what she’s accomplished so far. As a current NWA world title holder and NWA-Mid West women’s champion, she jokes that the only thing missing is a SHIMMER title. But she’ll have the opportunity to compete for that on June 1 and 2 at Shimmer Volume 11 and 12 DVD tapings.

And with her opportunities to wrestle for SHIMMER, APW’s Chickfight and overseas on a continual basis, she says she can’t honestly ask for more.

“I’ve already made it so much further than I ever expected,” she says. “Now is the challenge to stay on top of everything and keep up with what I’ve accomplished.”

But she quickly shuts down any aspirations of the WWE.

“I have no ambition to go to the WWE,” she says immediately. “It’s sad to me to see talented women wrestlers go to waste because the WWE won’t let them really wrestle. Instead they use them as nothing more than sex objects. I don’t ever want to leave wrestling the way I wrestle now. I don’t want to be told what I can and can’t do.”

She says she holds no ill feelings to those women who want to go to the WWE and make a living, but with her education and career she doesn’t need wrestling to pay her bills.

She chooses to wrestle on her own terms and because she loves it.

But of course the question on everyone’s mind is:

What is the “mysterious” green ooze made out of that MsChif uses on her opponents?

There’s no budging on this one and she slyly answers, “Oh, I can’t tell you that,” and then she lets out a hearty laugh.