TNA has put out its first official CD with wrestler’s theme songs and I can honestly say that 3rd Degree Burns is a fantastic jumping-off point for more music discs down the road.

Dale Oliver wrote and performed all the songs on the compilation (save for Christy Hemme’s track) and has done the same for every other TNA entrance theme song since the company’s inception five years ago. Once TNA started to earn respect and get noticed by the wrestling world, the company felt producing a CD was a step in the right direction.

“Jeff (Jarrett) approached me and said we needed to put out an official CD,” Oliver told SLAM! Wrestling. “We’ve had two CDs out previously, but the first one was just to see how many fans out there paid attention and the second one was still when we were just a mom and pop joint. This new one is our first official release.” 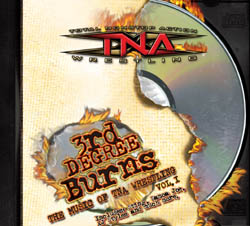 The CD has 21 tracks and the themes for Samoa Joe, Christian Cage, A.J. Styles, the now-defunct America’s Most Wanted, Abyss, Bobby Roode, Sting, Hemme, Rhino, Jeff Jarrett, Raven, Shark Boy, Alex Shelley, Gail Kim and the James Gang. What makes this CD noteworthy is that for a select number of wrestlers, their Victory Road promo background music (called a prequel on the CD) from the 2006 pay-per-view is included just prior to the actual theme. That’s a huge plus in my eyes.

With TNA creeping into the mainstream spotlight and attempting to trade blows with the WWE — or “the other guys” as Oliver calls Vince McMahon’s empire — theme music is one easy, nonchalant way fans can recognize a wrestler. Samoa Joe’s music is able to be identified right away, as is the theme for Abyss, Sting and Jarrett. A year ago, maybe not so much.

So, how does theme music come to be?

“A wrestler’s music is intended to create a mood,” said Oliver. “Most times, I’ll talk to a wrestler and see what he has in mind for his theme. I’ll also pitch them an idea or two based on their character. Then, maybe I’ll watch some videos of his matches and get a feel for what type of music best matches his or her style in the ring. We also will hear their old music from another promotion or from the indies, and tweak that a bit.”

“Jeff and I make the final decision on the songs,” added Oliver. “For this CD, I think it has a lot of flow and even though we had to cut some stuff because we have so much material, we did a pretty good job. When we made the CD, Serg (Salinas. GM of Trifecta Entertainment in Nashville) and (TNA president) Dixie (Carter) wanted it done with where TNA would be three months down the road in mind.”

Oliver records and produces all TNA music in his studio in Franklin, Tenn., just outside Nashville. He also attends the weekly Impact TV tapings in Orlando and pay-per-view events. Oliver came to last October’s Bound For Glory event and hopes TNA returns to the Detroit area.

“The sound in that place (Compuware Sports Arena) was incredible,” noted Oliver. “I try to not have too many songs that have words because by the time the introduction is over, the wrestlers are in the ring and the music stops. At Bound For Glory, the noise (from the crowd of 3,500) was never toned down.”

With Burns, maybe a couple themes were left out that should have been included (LAX, Ron Killings, Team Canada, Lance Hoyt and I’d say Kurt Angle, but the disc was done before he came to TNA), but the product Oliver has created gets a solid 4-1/2 stars out of five. I highly recommend it to any TNA fan or any wrestling fan in general.

“It never gets old hearing your work in an arena and realizing how cool it sounds,” quipped Oliver. “If the music grabs your attention, there’s nothing better.”