Comrades, I bid you greetings. It has been too long that I, Commander Corey of the People’s Independent Wrestling Revolution (PIWR), have communicated to our comrades in arms everywhere.

The delay was needed, baring the mind the recent re-launch of another so-called revolution called Extreme Championship Wrestling (ECW). Whatever hopes we may have had on this front were quickly dashed. Reanimated in body, but lifeless inside, this version of ECW mirrors nothing to the original product and is no doubt an affront to those who were so dedicated to what made the promotion special.

With this bad taste left in my mouth, I felt obligated to send forth troops from the PIWR bunker to seek out an alternative that truly embodies the spirit of hardcore. Mission accomplished; as we proudly present to you Hardcore Homecoming: November Reign Platinum Edition. 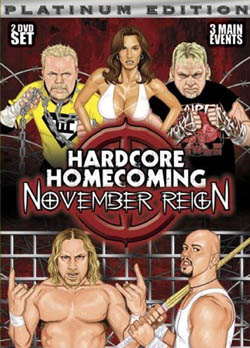 This title is but one of several DVDs released under the Hardcore Homecoming (Big Vision Entertainment) banner. The event took place in November of 2005 in the world’s most famous bingo hall, the Alhambra arena (ECW arena) in south Philadelphia. When it was all said and done, it would go down as being one the bloodiest events in recent years. Let’s follow the blood trail and see where it leads.

It wasn’t bloody, but it stood out for the wrong reason. Blue Meanie returns to action once again, bad dancing in abundance, to face off against fellow ECW alumni, Danny Doring. Aside from the disturbing (extreme?) tongue on nipple incident (this was the wrong reason part), there really wasn’t much to write home about. It was a short one, but we at least got to see Meanie pull off his Meaniesault.

The action intensifies with this match as another ECW extremist, Balls Mahoney, takes on Kronus, one half of ECW’s famed tag team, the Eliminators. Some wrestling at the beginning, but it was only a matter of time before they took it outside the ring and that’s where it got bloody. Both competitors put the guard rails to good use in inflicting punishment on one another. In due course, a steel chair would come into play, making it a bloody, hardcore outing on par with what you’d expect from both men.

This one would end up proving to be a highly entertaining confrontation, as the former enforcer of ECW, CW Anderson, takes on Matt “formerly known as Spike Dudley” Hyson. For Hyson, it was an overdue return to south Philly, with the fans giving him a warm welcome. But this night would also hold special for Anderson, making his in-ring return after recuperating from a severe liver infection. Both men were more that hyped for this one and it showed. A great combination of in-ring action and wild brawling on the outside would ensue, with Hyson showing that he can adapt to any kind of opponent thrown at him, including a technician of the caliber that Anderson is. After the match, Anderson gave a brief but emotional speech, thanking the fans for their support during his illness. Suffice to say; glad you’re still with us, CW!

God knows how long our very own Comrade “Bloody” Bob Kapur had been waiting for this one.

They were once known as the Bad Breed: Axl and Ian Rotten. But it was after the team split up that these two would achieve hardcore immortality by mutilating each other in some of the most infamous matches in ECW history. At November Reign, they would go at it again in the Taipei Death Match 2. The first Taipei Death Match took place over 10 years ago in July 1995 in the very same building.

One could not help but squirm even before the bell sounded for this one as Axl made his way to the ring, proudly displaying the shards of glass glued to his taped fists. Not even a minute passed at the start before they both started tearing each other open. Mind you, the ample amount of scar tissue on their bodies made this all the more easier. Both men exercised some real imagination when it came to using a fork and a staple gun on each other, earning some of the more vocal reactions from the audience at this event. While there was nothing athletic about this confrontation (minus the one drop kick), there is no disputing the vigor both participants displayed in living up to their well earned, violent reputations. A must see for hardcore fans everywhere!

Two more ECW icons stepping up the plate in another match entrenched with an abundance of history. Connoisseurs will remember back to the day in July of 1996 when Pitbull Garry Wolfe broke his neck while taking an arm bar take down from The Franchise, Shane Douglas. Depending on whom you ask, Wolfe either took the move wrong or was not protected properly by Douglas. The end result was another chapter of infamy in the history of ECW.

Fans were anxious for this one, with Douglas (accompanied by Francine) riling those in attendance with a profanity laced promo directed at the WWE head honcho, Vince McMahon. Connected by a 20-foot long chain, it was a certified brawl with both Douglas and Wolfe clobbering each other outside of the ring. The length of the match was definitely too short, baring in the mind the history Douglas-Wolfe have with each other. Still, both athletes made it a memorable outing.

You can’t help but get excited with anticipation when Justin Credible (now known by his real name, PJ Polaco) and Jerry Lynn are about to collide in the ring. Athletically gifted and passionate to their chosen vocation, it seemed only appropriate that these two, having never been given the chance to shine in other promotions, are granted the honor of being the main event at November Reign. An added selling point to this contest was the fact that this would be Lynn’s first ever cage bout, thus making this a must see match for Jerry Lynn fans everywhere!

It was what you would expect; fast, innovative and bloody. No matter how many times these two have fought, they always seem to create that air of magic. They really went the extra mile when in comes to utilizing the cage in a variety of brutal offensive maneuvers. Throw in a special surprise at the end (which really made an Impact) and you have another classic Credible/Lynn confrontation.

Disc 2 offered an absolutely stellar selection of matches involving a wide range of former ECW stars. The first batch was from the Hardcore Homecoming event held in Pittsburgh, PA. This included:

Some good tag team action from all four participants.

The Blue Meanie vs Tracy Smothers

It’s always entertaining when these two are in the ring. Smothers steals the show with his mic work alone.

It was what you would expect from all three — bloody carnage!

Another stellar wrestling match delivered by both of these two great wrestlers.

The next contingent of matches comes from a variety sources, all featuring former ECW greats.

This match took place at a time when both competitors were really at their peak. Snow has never gotten the respect he deserves as an athlete, while Sabu was setting a new standard in death-defying wrestling moves. What makes this a must see contest comes at the end with the entry of none other than Terry Funk. What ensues is pure mayhem, the kind that built ECW into the cult following that it was. Funk fans will howl in delight at watching Funk hide under a van in the parking lot, then fleeing the scene down the sidewalk, shirtless, after another hard day at the office. Like I said – must see!

Chris Benoit vs Too Cold Scorpio

Two of the most gifted athletes of their generation lock up in another phenomenal showcase of wrestling excellence. These can do no wrong when they lock up in the ring.

Great cruiserweight action, compliments of the now defunct XPW promotion. All three gelled really well in this one.

This match was from the XPW heavyweight title at that time and both men really tore the house down in this confrontation, brawling their way all over the building. Great stuff!

Before they revolutionized cruiserweight wrestling in the rest of North America, these two all-time great luchadors were electrifying wrestling fans in Mexico. Some high drama takes place near the end, solidifying this one as a classic.

Fans unaware of the long and bloody history of ECW may wonder what the product would look like beyond the controlling grasp of the current WWE brain trust. I would advocate that Hardcore Homecoming: November Reign would be the perfect example of what ECW could and should be. Granted, the show was devoid of many of the original stars from the original Hardcore Homecoming show, most of who went on to sign contracts with WWE. The hand-held camera work on Disc 2 may turn some off, but was more than sufficient in capturing all of the in-ring action. Overall, this DVD set will be well worth you hard earned money, whether you’re a long time supporter of ECW or a newbie looking for his first time, hardcore fix. Hardcore wrestling fans probably already have November Reign in their libraries (Right Comrade Bob?).

Comrades, the abundance of violence on this DVD set has left my body aching. Perhaps SLAM! Wrestling producer, Comrade Greg Oliver, would be so kind in making a financial contribution to the building of the PIWR Spa, which will include massages, pedicures and dermabrasion services.

Until next time comrades in arms … Desea vivo la revolución!