Just in time for the holiday season TNA The Best of the X-Division Volume 2 is out and probably to moonsaulted its way into more than a few stockings this week. The sequel to volume one does have some big shoes to fill as we are taken through to April 2006 of X-Division mayhem.

Introducing the DVD are the voices of TNA, Mike Tenay and Don West. The first 46 minutes are outlining from start to finish the intense feud between A.J. Styles, Christopher Daniels, and Samoa Joe.

This war, which started with Samoa Joe winning the Super X Cup finals in 2005, details his rise to become the most feared competitor in the X-Division. The heated rivalry between A.J. Styles and Christopher Daniels is also recapped and blended into how their past spills into their new common enemy, Joe. 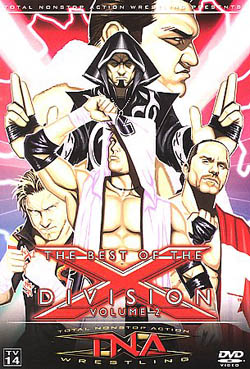 None of the following matches are shown in their entirety, but rather flip back and forth between clips and commentary by one of the three stars involved. The characters speak in a half shoot/half kayfabe manner that does not provide the usual behind the scenes insight normally associated with specialty wrestling DVDs.

Initially this may come across as a disappointment, however, the highlights and voiceovers are merged so smoothly that one comes away feeling that they received thorough coverage of that particular encounter. All of the pay-per-views involving Styles, Daniels, and Joe from TNA Unbreakable in September 2005 to TNA Destination X in March 2006 are covered in reasonable detail. The only match displayed in full was from TNA’s April 13, 2006 Impact debut on Spike TV where Samoa Joe faced Christopher Daniels for the X-Division Title.

Following these epic bouts Tenay and West outline that the X-Division is much more then the three stars just profiled. They explain how the division is full of international flavour, such as Senshi, and combine many different styles of wrestling, not simply highflying acrobatics. After the introduction the viewer is treated to twelve uninterrupted, full length matches of Impact and pay-per-views from 2005/2006.

Although many of the contests contain the same wrestlers, namely Alex Shelley and Petey Williams, each bout does come away offering something new and exciting for the fans. The only slight downside to the collection could be that many of the Impact matches run around the 6 to 10 minute mark and at times seem rushed or blurred together.

Regardless, TNA The Best of the X-Division Volume 2  is a must have for any wrestling enthusiast who enjoys fast paced, hard hitting action from start to finish. This DVD truly proves that the X-Division is “not about weight limits … it’s about no limits!”