Sometimes a mask can make a career. Don Jardine, who died Saturday, December 16, 2006, after a lengthy battle with leukemia, is case in point. As “Babyface” Jardine or “The Butcher” Jardine, he was never more than a mid-level wrestler. However, as The Spoiler or The Super Destroyer, he became one of the top masked men ever. 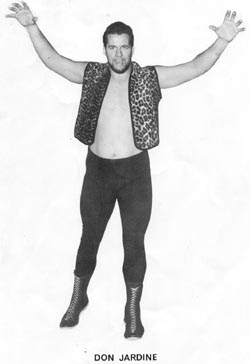 The mask arrived in his life in the Lone Star State in 1967, under promoter Fritz Von Erich. “When he came to me in Texas, he really blossomed. That was the first time he ever wore the mask,” said his manager and long-time friend Gary Hart. “All Don really needed was some packaging and some direction.”

“The mask suited me,” Jardine said in an interview with Terrance Machalek in the Canadian Championship Wrestling newsletter. “At least I could go on the streets and not have idiot fans calling me nasty names. I loved the masked persona.”

Jardine started using a claw hold — his was dubbed the Hart Krusher — and was from then on a main-event wrestler.

It was more than the mask, however, that kept him on top. Jardine had incredible balance, and could do more moves than most other 6-foot-4, 270-pound grapplers. For one, The Spoiler could keep the claw hold on his opponent while walking the top rope. “I always liked the ropes and wanted to do something different,” Jardine told the Mid-Atlantic Gateway website.

On his own website, Jardine explained his love of walking the top rope. “Because after I soften up my opponent in the ring, like a cat plays with a mouse, my opponent’s devastation comes from above when all the force of my huge body crushes his head , my elbow mashes the vertebrae in his neck, and I move in for the final kill with my claw hold pinning him to the mat.”

Jardine was a high flyer before there were many high flyers. “He was like Jimmy Snuka in that for being as big as he was and a little older, that man could do things that these young kids never even thought about doing,” said Bill White.

Born in rural New Brunswick in 1940, and raised in Moncton, Jardine grew into a hulking beast. He trained under fellow Maritimer Emile Dupre at the local YMCA, starting in 1955. A meeting with Canadian icon Whipper Billy Watson led to an invitation to wrestle in Toronto. “Naturally, Watson saw his height and his size. He must have weighed about 240, 250 at the time,” recalled Dupre. “He got a telegram to come to the matches at Maple Leaf Gardens.”

At the beginning, he was Babyface Jardine, and initially worked barefooted because he didn’t have any wrestling boots. “Don Jardine from Moncton, New Brunswick, is another likeable newcomer who is coming along in leaps and bounds under the tutelage of Whipper Billy Watson,” wrote The Ring magazine in April 1960. In his early days, Jardine was also known as Sonny Cooper.

His other aliases were:

During his career, Jardine made his way to more than a dozen countries, headlining especially in Australia and Japan, with his first of nine trips coming in 1963. In North America, he worked a plethora of territories, in part because he had a notoriously short fuse with promoters. The longest places he stayed were Texas and North Carolina, and that was just for two years.

“Promoters should be hung up by their testicles in the main square and drawn and quartered,” he told Canadian Championship Wrestling. “Bookers next to them because they lie and cheat for the promoters.”

‘No Class’ Bobby Bass heard that his friend had been suffering with leukemia, and caught up with Jardine in 2004. “I hadn’t talked to him in 15 years. He picked the phone up and it was like we never stopped talking,” said Bass, launching in to a story that illustrates both Jardine’s desire to protect his gimmick and his strong will in dealing with promoters. 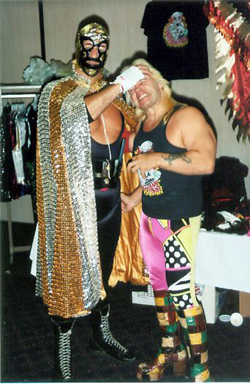 “He told me one time when he was AWA heavyweight champion, Verne [Gagne] said to him, ‘You’ll be taking your mask off tonight.’ He said, ‘No you won’t.’ Verne said, ‘Yes I will.’ He said, ‘Verne, you might as well try to take it off in the dressing room because you’re not taking it off there!’ Don was a pretty tough guy.”

By the early 1980s, Jardine’s career wound down, including a final, aborted run in the expanding WWF as the National champion. Jardine walked out on promoter Vince McMahon Jr. rather than face having his career tarnished by jobbing for lesser opponents.

“I just got tired after 30 years,” Jardine told this writer in an interview for The Pro Wrestling Hall of Fame: The Heels (ECW Press, spring 2007).

Jardine lost money in Texas during the oil crunch, and returned to the Maritimes, where he helped take care of his aging parents. In New Brunswick, he met his third wife, Becky, an RCMP officer. Together, they went to Florida for almost three years as Becky took a leave of absence and furthered her schooling. Don Jardine tried promoting wrestling out of Tampa Bay, Florida. “That was okay, but I was dealing with guys that were difficult, trying to get people to show up. It was okay. There was some good talent there, a lot of talent.”

Newly armed with a Master’s degree in criminology, Becky Jardine got transferred back to Alberta. Don managed a car wash for a spell, and got heavily involved in his artistic side, sculpting in clay and carving in wood, and writing poetry. Together, Don and Becky had one son, Jeffrey.

The last few years were very trying for the Jardines.

“It takes a toll after you take thousands of bumps. I figure I probably took a quarter of a million bumps on my back, because I had over 10,000 matches. It takes its toll after a while,” said Don Jardine.

He’d battled leukemia for the last four years, going in and out of hospital. This past summer, he battled pneumonia. Last week, he went into cardiac arrest, followed by a coma from which he never emerged. His wife Becky was by his side when he passed on Saturday night.

Greg Oliver talked to Don Jardine this summer, and the interview was one of the highlights of his work on The Pro Wrestling Hall of Fame: The Heels. Greg can be emailed at [email protected].