Lashley has a December to remember

Just two total matches were officially announced for Sunday night’s December To Dismember pay-per-view with a couple others rumoured. Going in, not too many WWECW fans had a good taste in their mouths, including yours truly. 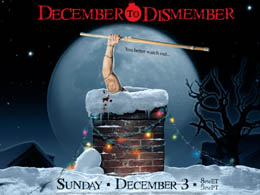 But after the show ended, 12 minutes shy of 2-½ hours, there were only a smattering of positives from the James Brown Arena in Augusta, Georgia. A new ECW champ was crowned in Bobby Lashley as the youngster, as had been expected, won the Extreme Elimination Chamber. And the Hardy Boyz and MNM had a classic tag team match, but I’m still not sure why four WWE guys were on an ECW-brand event.

That’s about where the positives end. Those that overpaid to see the pay-per-view also had to sit through a Matt Striker match, a Sylvester Terkay and Elijah Burke tag match and no dice on Sabu. More on that below.

The pre-show Free For All was a recap of last Tuesday’s ECW on SciFi show. And no new matches were mentioned for the pay-per-view.

Joey Styles pulls an “oopsie” right off the bat at the beginning of the show when he announces that a new ECW champion will be crowned tonight. But what if The Big Show wins?

Styles and Tazz note that after this match, Matt and Jeff Hardy, like MNM, are expected to go their separate ways.

Matt and Joey Mercury start the match and the pro-Hardy crowd quickly gets behind the brothers, who do their nifty little Wheelbarrow Driver on Mercury and then Matt hits a crucifix sit-out power bomb on Johnny Nitro. Matt then counters a double suplex into a double neckbreaker. MNM mock the Hardyz by nailing Poetry In Motion on Matt, but Mercury’s attempt at a Twist of Fate gets countered by Matt.

All four wrestlers end up on the floor in a big pile-up after Jeff launches himself from the top turnbuckle on MNM and his brother. Back in the ring, Team Xtreme hits Poetry In Motion, but Jeff misses a Swanton Bomb on Mercury.

Once the 15-minute mark rolled around, the pace slowed considerably. Jeff executes the Whisper In The Wind on both members of MNM and gets the hot tag to Matt, who hits the Side Effect on both heels. Matt and Jeff then each superplex a member of MNM and Jeff covers Nitro, but the ref is admonishing Melina. Nitro goes to dropkick Jeff, but tattoos Melina in the mouth and she takes a nasty bump to the floor.

MNM nail Jeff with the Snapshot, but Matt makes the save at the last possible second. Nitro and Mercury then set up Jeff for a top rope Snapshot, but Matt grabs MNM and pulls them both off the ropes with a double neckbreaker. Matt puts Mercury on top of Nitro and Jeff finally ends the match with a Swanton on both MNM members and gets the three on Nitro.

Winners via pinfall: The Hardy Boyz

Rob Van Dam then cuts a promo (the same exact one from Tuesday) on how he’s the next ECW champ.

Whatever happened with Striker’s “feud” with The Sandman and Mahoney’s rift with Kevin Thorn?

Striker comes out and announces that his opponent is Balls. He then wants the match under “Striker’s Rules” and the ref obliges to have no eye gouging, hair pulling, moves off the top rope (Bill Watts is loving this) or foul language.

Striker also has his mug on the seat of his tights and Styles says there’s something to be said for a man who likes to sit on his own face. Epic.

Lots of technical mat work early and Striker works on Balls’ left arm and almost gets a tap-out with a Fujiwara armbar. Balls heads to the top rope, but as the ref makes him get down, Striker shakes the ropes and Mahoney crotches himself. Seconds later, Balls hits a sit-out spinebuster and gets the pin.

CM Punk is shown warming up in the back and then EMTs are hovering over an unconscious Sabu. Paul Heyman comes to the scene and “wonders” what happened. One paramedic keeps saying over and over that Sabu is unresponsive. In real life, too? Chants of “Bulls**t” rain down in the arena and for good reason.

Are the F.B.I. heels or faces? They faced the Hardyz two weeks ago, so what gives?

Burke wears a red hat reminiscent of Wesley Snipes in White Men Can’t Jump and loses it early. Guido puts it on and Tazz says he looks like he’s serving pizza. Burke ends the match just past the seven-minute mark with the Stroke, I mean the Elijah Experience, on Mamaluke. Terkay then hoists Guido up in the Muscle Buster, but Samoa Joe Terkay isn’t. Chants of “TNA, TNA” are heard and Styles then calls the move the Muscle Buster. Wonder if TNA has that move’s name under copyright?

Backstage, RVD and Punk watch Sabu get loaded into an ambulance.

This is the best Dreamer gets?

Khali pulls the top rope down as Dreamer went to bounce off and the ref ejects the big man. Dreamer hits a delayed dropkick with Daivari hanging upside down in the corner and readies for his patented DDT. Daivari counters it into a rollup and with a handful of tights gets three.

Dreamer chases Daivari to the back, but he’s met by Khali who choke power bombs him onto the stage. Looked pretty sick. Dreamer doesn’t move and when the camera zooms in on him he notes that he can’t feel his feet. A “doctor” comes to his aid and Dreamer gets to his feet for a brief second before crawling through the curtain.

Again, I ask: Is this the best Dreamer gets?

Heyman finds Hardcore Holly in the back and tells him he is Sabu’s replacement in the Chamber. Who didn’t see THIS coming?

Kelly grabs the mic and with Knox’s back turned, wishes Punk luck in the main event. Knox and his ugly grill are obviously none too pleased.

The men go back and forth early with Thorn having a distinct advantage. Like others on this card, I’m not sure what this match is trying to accomplish.

Ariel gets tagged in and in comes Kelly, who gets destroyed. She crawls to tag Knox, but Knox pulls his hand away and walks out of the match. Ariel gets the pin with a choke/trip move and the vampires win.

Thorn and Ariel continue to assault Kelly when The Sandman’s music hits. He comes in and obliterates Thorn with the Singapore cane all the way to the back before he comes out for a quick beer bash. And this is the guy WWE marketed this event around? Someone who did a two-minute post-match run-in?

Rebecca is in the back with Lashley and provides more hype for the Extreme Elimination Chamber.

Heyman and his crew (personal enforcers, Holly, Test, Show) are shown backstage. Heyman then moseys down to the ring and mentions that Sabu will not be in the main event (more BS chants here) and that the days of Sabu, Sandman and RVD are at an end. He then says it’s time for the Chamber to be lowered. Guess it’s main event time. But it’s not even 9:45 ET yet.

Van Dam hits Rolling Thunder over the top rope and onto Holly, who was on the steel surroundings of the Chamber. Punk is the first one to enter the match and he fires the chair at Holly’s dome and then hits a springboard clothesline on Van Dam. RVD is cut above the right eye and ends up face-first through a chair that Punk wedged between the top two ropes (par for the course for an RVD match, eh?).

Test enters the fray and gouges RVD’s head with the crowbar. Van Dam rallies the crowd for his skateboard dropkick into a chair on Punk, who rolls around as if he’s been knifed. A Five-Star Frog Splash later and Punk is the first one gone. Now, I didn’t expect him to win, but the first one eliminated?

Test readies a big boot for RVD, but instead nails Holly. He covers for what appears to only be a two count and Test gets up looking confused. In any event, referee Mickey Henson rolls Holly out. Guess two equals three nowadays.

RVD climbs up onto Big Show’s pod, flipping the champ the bird on the way up, but gets caught by two chair shots from Test. Van Dam hits the mat and Test puts the chair on Van Dam. Test then scales Show’s pod and hits a massive elbow onto the prone Van Dam for another three count.

Lashley is the next entrant, but Heyman’s goons toss aside the outside ref and bar the pod shut. Test taunts Lashley, who breaks the chains on the roof of the pod and climbs out. He thrown Test into the table, clocks him in the gut with the crowbar and takes a fall after a huge spear.

It’s now down to Lashley and The Big Show. The champ grabs the barbed wire bat and points it at Lashley as the two engage in a staredown. Show tries to hit the former U.S. champ repeatedly, but he blocks the shots with the chair. Show then gets the bat stuck in the cage and Lashley throws Show through one of the pods. Show has juiced, but that only seems to rile the former Giant. Lashley counters the chokeslam into a DDT (again, par for the course) and then counters a powerslam into a decent-looking spear to win the Chamber match and the ECW title.

There’s not really a big ovation, but Lashley looks pumped. Guess with all the wrestling message boards online these days, it really wasn’t a surprise to have the injured Show job to Lashley, who is a heckuva worker.

Lashley walks up the ramp to a big-time fireworks show, basking in all his glory, and then the show abruptly ends with Styles, almost rushing, saying good night to us viewers.

This show, aside from the Hardyz match and the main event, was very below average. I paid to see Matt Striker in a match he could have had for free on Tuesday nights? I mean, did Vince and Heyman draw names out of a hat to make these matches? Nothing really made sense to me. I wouldn’t say demand a refund, but maybe find a bar that shows these events next time rather than forking over your hard-earned dough to watch it at home.

All in all, I say 4/10 stars. The two matches that were promoted saved this thing from being a debacle.

Matt Mackinder is the regular SLAM! Wrestling ECW TV reporter, and has been trying hard to see the bright side of things.