Reviewing one of the latest DVDs to come out of WWE headquarters, in a way, is an exercise in futility.

You see, this particular DVD, The History of the WWE Championship, is a virtual guarantee on a fan’s wish list. Anyone who has grown up, and still is, a wrestling fan will want to get this three-disc set.

So what do you do then, when you have a guaranteed seller? Well, if you’re a writer like me, who is a wrestling historian, you look for a trend in the matches included and look to see if they are a true indicator of the overall scope of what it presents.

To me, WWE Home Video has accomplished that — there is no question that the disc is an accurate portrayal of what the belt, and more so the company, has been doing over the 40-plus years of its existence. 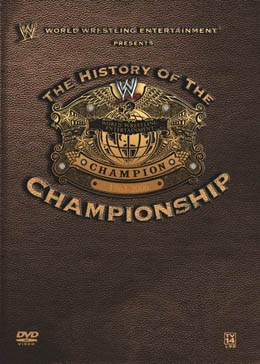 You see, the vision of WWE is that the company has been as much focused on the showmanship as it has been the actual in-ring abilities of the superstar holding the title. This has been very evident in cases where a wrestler is not as much a wrestling general as they are a good hit on the mic or are dripping with charisma.

As you look back through the matches on this DVD, that becomes clearly evident. “Superstar” Billy Graham, Hulk Hogan, The Ultimate Warrior and others, you see a lot more characters than wrestlers. Yes, there were strong wrestlers like “Macho Man” Randy Savage, but the reasoning behind these talents getting their runs with the title had a lot to do with happenstance. In Savage’s case, it was Hogan going off to do a movie. When it came time for Bret Hart and his battles, it was to use the smaller guys amidst the steroid scandals.

While Hart, who is featured in a couple wicked matches, was the start of the rebirth, It was truly Shawn Michaels who was the launching pad of the “new generation” that saw more of a focus towards the wrestler than the sports entertainer. The two of the three consecutive Michaels matches (Hart, Steve Austin) illustrate this with some technical brilliance, capped by the personalities of the wrestlers. The theoretical exception that makes the rule here is Mankind, but even here you see a great in-ring exhibition, rather than the U.S.A. rally you see in Hogan versus Iron Sheik.

Going forward into the Attitude Era, we have Triple H, Rock, Kurt Angle and Austin heavily shown, again illustrating the emphasis on competent wrestling. Each of these guys had the character build, but the difference between Hunter and the Superstar, for example, are night and day. Move forward to the InVasion Era and the Brand Split, and you still see that continuance in the likes of Angle, Brock Lesnar and Chris Jericho. Even the character of all characters in the ’90s, The Undertaker, comes in as more of a ring performer than stage performer than he was at any point in his career. Each of these bouts is entertaining and, with the removal of the storyline context which is necessary for a lot of the characters, stands the test of time.

That’s not to say that there weren’t characters during these periods. For every Owen Hart there was a TL Hopper and for every Chris Benoit there was a Kane. In most of these cases, however, the wrestler, rather than the entertainer, wore the gold. The same was largely the case in the pre-Hogan era (Graham being the exception), where the Iron Shiek and Sgt. Slaughter (in the ’90s) was a go-between champ, much like Kane was during the Austin era. The challengers, meanwhile, like Ivan Koloff and Sgt. Slaughter (in the ’80s), were never really considered threats to the purity of the “sport.”

So then, is the period of matches from the mid-’90s to the early-2000s a blip on the otherwise cartoonish timeline that WWE has carried? In some ways, yes; but in other ways, no. If you look at the pre-’80s matches, you see that indeed there were pure wrestlers who had long runs with the title like Bruno Sammartino, Bob Backlund and Greg Valentine. In their cases, there were certainly characters like Sgt. Slaughter and Ivan Koloff, but these were largely the rule as opposed to the exception.

Unfortunately, at the end of the DVD we see the re-introduction of the gimmick era with John Cena holding the title. Argue Cena’s charisma all you like, but even he will admit that his technical abilities are not at the levels of the Triple Hs, the HBKs, the Harts or the Angles of that era. Really, all that WWE needs is the strong evil foreigner heel that Hogan had in Sheik for the comparisons to really be capped.

Of course, the battle between character and wrestler is not necessarily a bad thing. Like it or not, the vast majority of us got into wrestling because of Hogan. We might’ve stuck around because of the Savages and Harts, but the Warriors brought us in. WWE has to be commended for highlighting both of these types of competitors in The History of the WWE Championship, ensuring that fans of both genres pick up this collection.