Unless you became a wrestling fan within the past five years, you already know all about the rise and fall of WCW. Surely, you’ve read a book or watched a DVD that told you how Eric Bischoff took Ted Turner’s “wrasslin'” company and transformed it into an entity that could beat Vince McMahon’s WWE at its own game, until foolish financial and personnel decisions brought about its slow, painful demise. 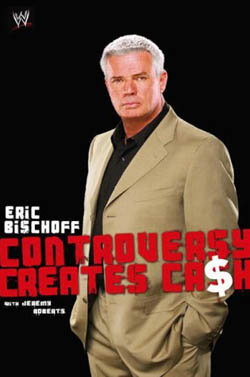 Unfortunately, much of what you know is wrong.

That’s the working premise of Bischoff’s new book with co-writer Jeremy Roberts, Controversy Creates Cash. Numerous people have taken a stab at detailing exactly what went right and what went wrong with WCW in its heyday, but the one voice that has so far been silent belongs to the man in charge during the promotion’s dizzying heights and equally dramatic lows. Clearly, Bischoff feels that needs to change.

“Plenty has been written about WCW and my time there,” he says in the book’s prologue. “But none of the stories of its demise have come from someone who was there. It’s been written by people who were either just making shit up or hearing rumors. I was there, on the front lines. They weren’t.”Before they attempt to clear up any misconceptions, Bischoff and Roberts take the reader back to the beginning to explore the influences that shaped the man. The book’s first two chapters recount Bischoff’s nomadic childhood, his introductions to wrestling and martial arts and his start in the business with Verne Gagne’s AWA. The personal anecdotes go by quickly and serve to separate the man from his on-screen persona.

Appropriately, the bulk of Controversy Creates Cash is devoted to the WCW years. From his start as an announcer brought in to “put pressure on Jim Ross and Tony Schiavone” to his ascension to president of the promotion, Bischoff explains the combination of persistence, determination and luck that got him to the top. He proves to be surprisingly gracious at times, crediting Turner with the idea to go head-to-head with Raw and Scott Hall with many of the early nWo ideas. But he also comes off as dismissive and even condescending to those who disagreed with his vision.

Bischoff spends a lot of time discussing the ever-changing climate at Turner (and later, AOL-Time Warner), to the point where the reader almost needs a scorecard to keep track of the players. It’s a necessary evil, since he places much of the blame for WCW’s downfall on corporate politics and red tape, but it bogs down the middle of the book. Things pick back up when WCW is in its death spiral, and Bischoff is pretty honest about listing all of the company’s various blunders (adding Thunder to the lineup, allowing Halloween Havoc ’98 to run too long and doing angles with Kiss and Master P, among others) even if he’s not willing to take the blame for most of them.

The book’s final chapters deal with Bischoff’s role as a recurring character on the very programs he once competed against so fiercely. With so many former employees and co-workers on the roster, it seems like a situation ripe for tension. But in Bischoff’s mind, all the old hatchets are buried, even with those he once fired (Steve Austin) or gave the okay to cut loose (Jim Ross). Following the pattern established by many WWE books, he has nothing but good things to say about Vince and the McMahon clan. The lone Vince-related dig — that DX is a rip-off of the nWo — is probably a source of amusement now that both men are making money together.

In fact, given that the publicity campaign for the book focused on how many people would be upset at its contents, it’s ironic that it contains so little of the controversy the title implies. Bischoff has a little venom for people like Lex Luger and Vince Russo, but nothing that strays too far from opinions already held by many fans. To his credit, Bischoff appears to be able to put his personal feelings aside and work with just about anyone if it is good for business, a trait that no doubt served him well over the years.

One group of people who does get blasted are “dirtsheet” wrestling writers like Dave Meltzer and Wade Keller, who Bischoff calls “parasitic life forms” and “nerds who probably couldn’t get or hold a job doing anything else.” He’s apparently not the biggest fan of Canada and its citizens either, as evidenced by this passage from his chapter on Bret Hart:

“Their economy is completely dependent on ours. Their army and navy are nonexistent when it comes to being able to actually defend their country; they rely on the United States to do most of the job. If you look at the demographics of Canada, a large percentage of the population lives within a hundred miles or so of the border. Why do you think that’s the case? So they can get the hell out of Canada as often as they can!”

For the most part, Controversy Creates Cash sticks to the easy targets and avoids ruffling any major feathers. It’s worthwhile reading for its insight into the business of wrestling and its firsthand account of life behind the scenes from WCW’s architect. That will have to be reason enough for the book to ring up sales, because readers expecting jaw-dropping revelations or juicy dirt will have to look elsewhere.